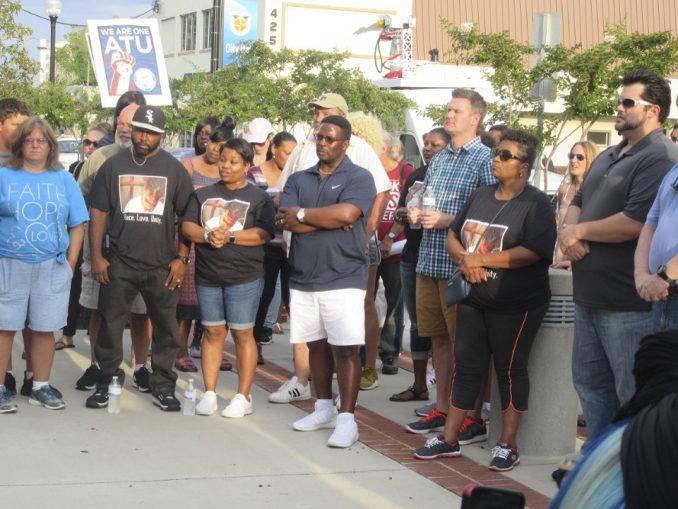 Suffolk, Va. — A multinational crowd of over 100 people came together here on Aug. 19 outside City Hall to support their friend, Deandre Harris, who had stood up for justice in Charlottesville, Va.

Harris, a 20-year-old Black man from Suffolk, had joined the Charlottesville event against the Klan and Nazis on Aug. 14 “to voice my opinion.”

He was physically attacked in a parking garage beside a police station by a group of white supremacists who threatened his life, while shouting vicious racist language. They have not been arrested. He later wrote: “I was chased and beat with metal poles. I was knocked down unconscious repeatedly. Every time I went to stand up I was knocked down.”

Harris suffered a concussion and broken arm and needed eight staples in his head. He also has a chipped tooth, along with many abrasions and lacerations.

Among those at the Suffolk rally were many ministers from the community and six people from nearby Norfolk who also rallied against white supremacy in Charlottesville. Some wore Black Lives Matter T-shirts. They attended a similar event in Norfolk the previous day.

Harris’ mother spoke briefly. Along with others, she wore a T-shirt reading “Justice for Dre.” His GoFundMe page has raised over $100,000 to help with his medical costs, showing enormous community support for the heroes who went to Charlottesville.

Quoting the Rev. Dr. Martin Luther King Jr., Pastor Da ‘Qwone D. Hill said, “It’s great how we have come together … and stand stronger against divisiveness and racism.” Harris’ friend Imari Griffin, 25, attended the same high school and felt compelled to build support for him. She planned the rally, which was covered by local television and newspapers.