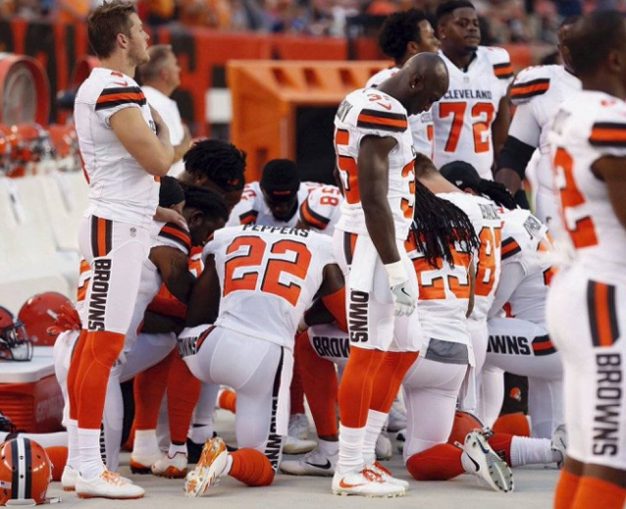 The Aug. 12 protest in Charlottesville, Va., where thousands of anti-racist activists united against armed white supremacist terrorists, has galvanized broad sectors of society to speak out against racism and fascism, including athletes and coaches.

Even before Aug. 12, it was Colin Kaepernick’s silent but powerful protest against ongoing police brutality by kneeling during the national anthem throughout the National Football League’s 2016 season that sparked an unprecedented wave of various forms of protest in U.S. sports, amateur and professional.

Those protests continue today as Kaepernick, who left the San Francisco 49ers, is still unemployed as a quarterback before the opening of the 2017 NFL season. Some prominent NFL players, including Richard Sherman, Michael Jenkins and Brandon Marshall, say that Kaepernick is being “whiteballed” by the 97 percent white NFL owners because they want to pressure others players to remain silent on social issues, especially racism.

But this tactic will backfire, especially after ­Charlottesville.

For instance, during the playing of the national anthem at their pre-season games, a few white NFL players, including Chris Long and Justin Britt, put their arms around their Black teammates — Philadelphia Eagle Malcolm Jenkins and Seattle Seahawk Michael Bennett — who protested.

Long, a graduate of the University of Virginia in Charlottesville, stated, “If you don’t see why you need allies for people that are fighting for equality right now, I don’t think you’ll ever see it. My thing is Malcolm’s a leader and I’m here to show support as a white athlete.” (sbnation.com, Aug. 19)

During an Aug. 21 game, 12 predominantly Black members of the NFL’s Cleveland Browns took a knee during the national anthem, with one being white. This is the largest single number of players who have knelt on one team.

Other prominent athletes who have criticized President Trump’s support for the white supremacists include Kevin Durant of the Golden State Warriors, the 2017 National Basketball Association’s champions. Durant, who won the NBA Finals Most Valuable Player award, stated that he would boycott going to the White House if Trump was still in office. It is a tradition that amateur and professional championship teams pay annual visits to the White House for photo ops with the president.

Other Warriors players, such as Steph Curry, David West and Andre Iguodala, stated right after they won the title that they would boycott the White House due to Trump’s racism and misogyny. Durant told ESPN, “I don’t respect who’s in office right now. … I’m representing a lot of people. As far as what’s going on in our country, for one, as an athlete, you have to commend Colin Kaepernick, LeBron James, Carmelo Anthony, CP3 [Chris Paul and] Dwyane Wade for starting that conversation last year. Russell Westbrook also said something in his speech. A lot [of] guys with platforms have drove the conversation in a good direction. And what’s going on in Charlottesville, that was unfathomable.” (Aug. 17)

Malcolm Brogdon, a member of the NBA’s Milwaukee Bucks and a graduate of UVA, stated that Confederate statues “have no place in our society right now.” (rollingstone.com, Aug. 17) Since the presidential election, the Bucks have boycotted staying in Trump hotels.

Steve Nash, a former two-time NBA MVP who is white, referring to Trump’s winery in Charlottesville, stated on Twitter: “To defend white supremacists and then slang his shitty ass grape juice pretty much sums the man up.” (Aug. 15)

David Fizdale, the Black coach of the NBA’s Memphis Grizzlies. said of Trump in a Aug. 16 interview, that equating the Nazi marchers with Black Lives Matter protesters was “disgusting.” “What are you taking about here, how can you even say that?” (Dime Magazine) Fizdale also expressed his solidarity with activists taking down Confederate statues in Durham and elsewhere.