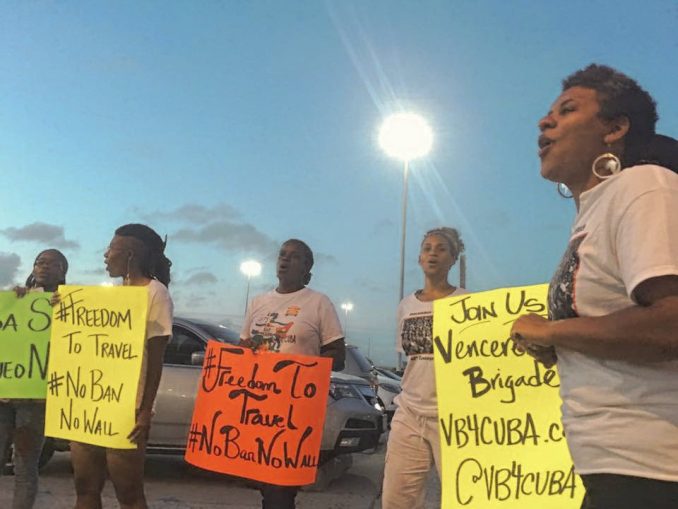 Members of the 48th Venceremos Brigade challenge the U.S. blockade and defend the right to travel to Cuba.

When the 48th Venceremos Brigade contingent arrived at the U.S. border crossing at the Buffalo/Fort Erie Peace Bridge on Aug. 5, they responded to Customs and Border Patrol questions with the usual reply, “On the advice of my attorney, I decline to answer that.” The customs agent responded to the first brigadista, “Oh, it’s Venceremos Day. Nobody told us.”

Many people challenging the U.S. blockade and travel ban against Cuba have marched across the Peace Bridge into that same Customs building —  returning from unlicensed travel with banners flying and chants resounding.

This year, however, the VB had planned to return Aug. 4, flying by way of a Toronto connection to New York’s Kennedy International, thus moving the challenge focus to one of the largest and busiest airports in the U.S. They had called supporters of travel freedom to greet the returning contingent at JFK’s International Terminal.

Their announcement pointed out: “The Obama administration made travel to Cuba easier, but President Trump has announced restrictions soon will be tightened again. … This July, for the 48th time, a group of U.S. citizens is challenging these restrictions as a violation of the right to travel freely.” (#FreedomToTravel)

On Aug. 4, supporters were waiting for them at JFK with brightly colored signs and an informational leaflet to hand out to travelers at the International Terminal. Along with chants about Cuba, “From Cuba to Sudan, end every travel ban,” rang out. Passersby in cars honked approval, and people entering the terminal gave encouraging words. The media came, and the struggle against the U.S. blockade continued.

But the brigadistas’ Toronto to JFK flight was suddenly cancelled. Instead, they had to quickly organize an Aug. 5 return through the Peace Bridge at Buffalo, N.Y.

As they crossed there, they successfully upheld our right to travel and associate with the Cuban people, freely without a license. As Frederick Douglass famously said, “Power concedes nothing without a demand. It never has and never will.”