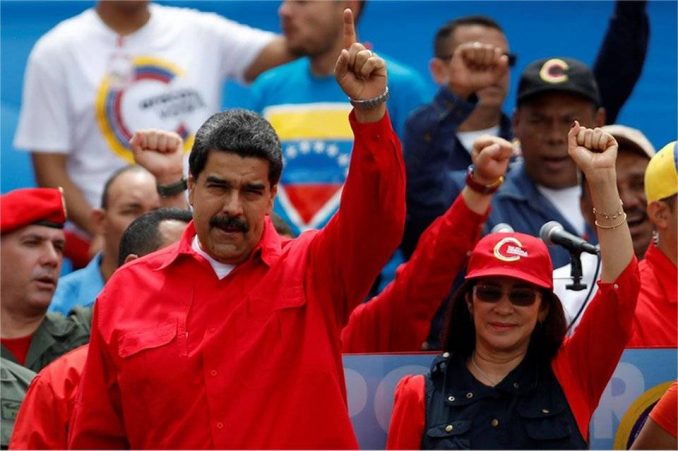 Venezuelan President Nicolás Maduro called on May 1 for a National Constituent Assembly to resolve the crisis in the country. Everyone was invited to participate and develop a comprehensive solution. But on July 31, the day of the election, some refused to participate.

Can you guess who?

It was the opposition forces that have been leading protests and riots in the streets of Caracas for the last several months.

Why wouldn’t this opposition, which calls for “more democracy,” participate in such an election? Since April 4, they had been in the streets demanding early presidential elections. By participating in the National Constituent Assembly, however, they could have helped rewrite the highest political document in the country, to which every elected president is beholden.

The opposition claims it represents the majority of Venezuela. So this seemed like a prime opportunity for them to achieve their demands on a much grander scale than they had envisioned. It is a legal process — provided for in Articles 347 and 348 of the Venezuelan Constitution — and a highly democratic opportunity. Voters in the U.S., by contrast, are given no such opportunity to rewrite the basic laws of the country.

Days before the National Constituent Assembly election, the opposition hosted its own plebiscite, offering Venezuelans a chance to show they rejected the assembly. The opposition claimed that 7,186,170 people voted on July 16. This is compared to the 8 million people who voted for the National Constituent Assembly. However, to understand these numbers, a closer examination is needed.

Let’s first look at the plebiscite process, which the U.S. media — known for spreading lies about weapons of mass destruction and endorsing U.S. regime-change efforts across the globe — unanimously praised as an example of democracy in action.

In other words, the opposition doesn’t represent the majority and they are losing support. But even these numbers should be viewed with great suspicion, because there is actually no way to verify them.

A register of eligible voters for the plebiscite was never created, and as an investigative report showed, people could easily vote multiple times — and did. Voters were asked to produce an ID card, but this ID was not checked against a list. The voter then filled out the ballot in front of the people running the booth, and the vote was slipped into a ballot box. This is far from standard practices of a secret ballot. At the end of the day, some opposition forces even burned the ballot boxes, making a recount impossible. (goo.gl/soV4ZQ)

In interviews with Telesur, the three observers painted a very different picture than that given by the U.S. corporate media.

First, a list of eligible voters had been compiled. Those voting were verified by an ID card and by fingerprint. They then cast their votes electronically and were asked to confirm once finished. If desired, a voter could have their vote printed out to confirm that their ballot had been properly cast.

As Vasquez said, “It was a more advanced system than anything I have seen in New York.”

The 8 million votes cast this way, however, do not tell the whole story.

Across Venezuela, blockades were created by the opposition to prevent people from voting. This didn’t stop everyone. Some traveled miles out of their way to reach another voting station or, in one heroic case, crossed a river to circumvent a highway blockade. But that emphasizes the fact that not everyone who wanted to vote could do so easily.

Another deterrent was the threat of violence. At a dry run of the election held days earlier, armed gangs of bikers had attacked polling stations, killing one person and injuring three others. On the day of the election, 200 centers were attacked, killing 10 people. (tinyurl.com/ycd63mng)

It’s clear which of these processes is democratic and which is a real sham. Nevertheless, the U.S. capitalist media continue to praise the “plebiscite” as a sign of Maduro’s illegitimacy, while also attacking the National Constituent Assembly election as unfair and the assembly itself as the end of democracy.

Not once does the corporate media go over how the National Constituent Assembly actually works. If they did, their readers would probably start questioning what all the noise is about.

The National Constituent Assembly was not convened so the president could impose his “authoritarian” will. Far from it. The results of the assembly’s decision-making process are a collective effort determined by 545 elected members. Some 364 of them are elected according to region; 173 others are elected according to sector, which includes workers, farmers, people with disabilities, students, pensioners, the business sector and the communes; and eight are from Indigenous communities.

On the day of the election, the U.S. observers noted the participation of large numbers of women and youth. Before the election, the LGBTQ movement in Venezuela had already created its proposal for the assembly. And in the largely Black region of Barlovento, as well as on the national level, Afro-Venezuelan youth participated en masse in pro-government demonstrations for days leading up to the vote.

These groups make up the majority of the Venezuelan people, and they are poised to gain the most from the National Constituent Assembly. A spokesperson for the opposition coalition, MUD, even criticized the provision that half the delegates come from these grass-roots movements and marginalized groups.

How can someone who is against that provision claim to represent democracy?

In a place like Venezuela, which even Jimmy Carter has acknowledged as having the best election process in the world, the U.S. government’s old playbook of justifying its sanctions and military ventures to “spread democracy” doesn’t work. Now that the right wing has failed to mobilize widespread support, the concern is that it will turn to more openly violent means of imposing its will.

Already this is happening.

On Aug. 6, a dozen men in uniform attacked a military base near the city of Valencia. They claimed they were fighting to restore constitutional order. The attack was successfully stopped by the Venezuelan military, but it only showed the desperation of the opposition.

The Bolivarian Revolution, however, is alive and well. Despite all the hysteria, the government is in control of the situation, as all three U.S. observers discovered after stepping off the plane. The streets were not filled with blood, but with people celebrating the opportunity to deepen the gains of their revolution.