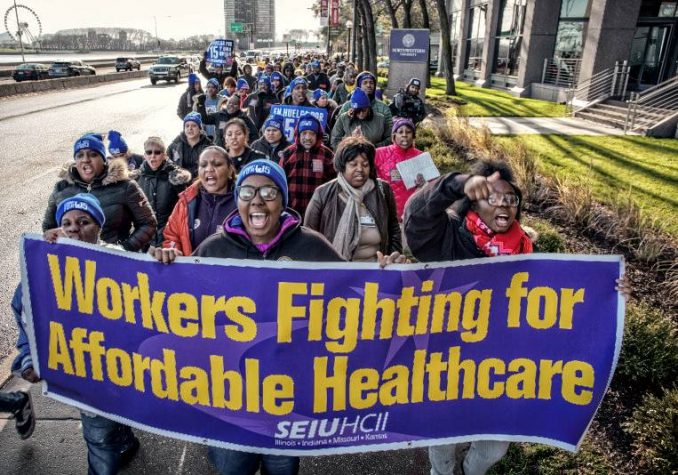 Fighting to win the basic right to health care for all in the United States. Demonstrations like these blocked attempts to gut already inadequate access to health care.

Who are the real heroes in the struggle to stop the attacks on the health care system?

Although the corporate media hailed three Republican senators and 48 Democrats for defeating the “skinny” repeal of key parts of the Affordable Care Act on July 28, that’s not the real story.

It was the activists who organized, marched, sat in, got arrested, made phone calls, wrote emails and raised a ruckus who made the difference, not the politicians. The grass-roots movement fought hard against all Republican “repeal and/or not replace” anti-ACA bills. Organizations began mobilizing to save Obamacare last December. In the states, people rallied at town hall meetings, besieged congress members’ offices and used social media to save the ACA.

After a National Day of Action on March 23 in Washington, D.C., and 40 cities, the struggle continued. Activists not only targeted anti-ACA Republicans, but also pressured Democrats to protect health coverage.

Planned Parenthood, Housing Works, National Nurses United, UltraViolet and many other groups organized against every right-wing attempt to overturn or weaken the ACA. Hospitals, especially rural facilities that depend on Medicaid reimbursements; doctors and other medical personnel; health advocacy organizations; as well as community and senior groups, such as AARP, opposed gutting the ACA.

Special recognition must be given to the heroes of National ADAPT (Americans Disabled for Attendant Programs Today), which organized sit-ins and die-ins in Senate Majority Leader Mitch McConnell’s office and at Republican senators’ offices countrywide. TV and online media showed courageous activists, many of them women, being arrested and often mistreated by police.

Chants of “Save Medicaid” resounded at their 40 actions, where they put their bodies on the line to save the program, a life-and-death issue for them. Medicaid provides medical care, caretakers, equipment and more to 10 million people with disabilities. (Alternet, July 28)

Protests stepped up around the country from July 17 through July 27. Hundreds were arrested in Washington during that period. On the July 25 National Day of Action, when senators voted to take up the first anti-ACA bill, 95 people were arrested. Police grabbed 31 protesters in the Senate chambers as they chanted, “Kill the bill! Don’t kill us!” Then 64 people were arrested in the Hart Senate Office Building, as they yelled they would “rather go to jail than die without Medicaid.” National ADAPT and the National Center on Independent Living/Advocacy co-coordinated these protests and others on the following two days, with support from allies.

This resistance is in response to seven years of attempts by reactionaries to get rid of Obamacare. The right wing has been so hostile to the ACA that misogynist officials threatened to physically assault the two Republican women senators who opposed the law’s repeal.

White male millionaire senators, led by McConnell, conspired to concoct bills to overturn or severely limit the ACA’s benefits. Under those bills from 16 million to 32 million people could have lost health insurance, including Medicaid recipients. Every bill would have harmed people with disabilities; African-American, Latinx and other oppressed people; members of the LGBTQ community; women; children; seniors; and low-income workers.

However, all Congress members made sure to exempt themselves and their staffs from cuts to their comprehensive, government-financed health care coverage.

The ACA brought health coverage to over 20 million people. At least 10 million got Medicaid through its expansion, while many people got government subsidies to purchase insurance. The ACA bars using pre-existing conditions as an excuse for denial of coverage.

Women benefit, as the law requires employers’ insurance plans to pay for contraception. The law’s elimination of co-payments for mammograms has resulted in more breast cancers being diagnosed at an earlier stage than pre-ACA. (New York Times, June 27) The ACA also mandates funding for Planned Parenthood, an organization despised by the right wing, which provides basic health care to over 5 million low-income people, the majority women.

However, the ACA is a capitalist measure. It’s based on people buying coverage from insurance companies, whose goal is to maximize profits. Some plans are very expensive, with high premiums and deductibles. Hard hit are those who must buy costly policies, but cannot obtain subsidies. People who do not buy insurance are fined — but the very reason for not purchasing insurance is usually prohibitive cost.

The ACA mandated states to expand Medicaid, but the Supreme Court in 2012 allowed them to opt out, which 19 reactionary state governments did. This has left millions of low-income workers, disproportionately African American and Latinx, without health insurance or subsidies. Thousands of former prisoners have no coverage. Undocumented workers are barred from having Medicaid — and even from purchasing private policies. In some states, no insurer will sell policies as part of the ACA.

This is the wealthiest country in the world with the most expensive medical care system. Nearly all other advanced industrialized countries have some form of health care system, such as Britain’s National Health Service, which provides care to everyone, with residents taxed to pay for it.

But in the U.S., the super-rich are determined to obtain huge tax cuts for themselves, and are aiming to gut hundreds of billions of dollars from Medicaid and other government programs in order to do so. 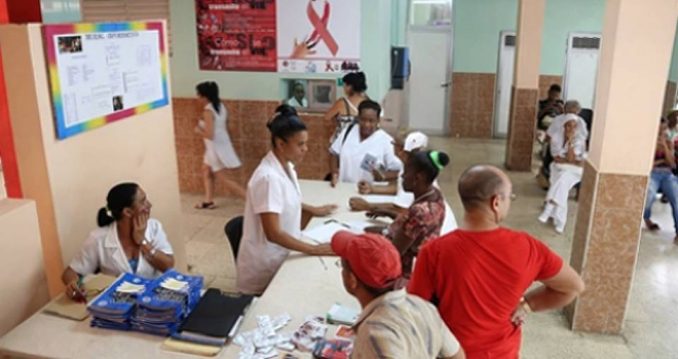 An improvement for the U.S. would be “Medicare for all.” Because of rising consciousness around the country due to the recent struggle, 60 percent of the U.S. population now supports government-sponsored health care. Many people are catching on to the idea of a single-payer system. The health care advocacy movement would advance the struggle by pushing for this.

Medicare for all is worth fighting for and is possible under capitalism. It would be easier and less costly to administer than the current system and would cover everyone.

Health care is a human right. It should be provided to everyone like sanitation and fire-fighting services, libraries, public schools, roads and parks.

The optimum solution would be a system of socialized medicine, resembling what Cuba provides for its people. Quality care there is accessible to every person and is subsidized by the government. There are no profits going to insurance or pharmaceutical companies, and health care is not a commodity to be bought and sold. It is a service provided to the people.

There are many worthy proposals on how to improve the ACA and lower medical costs, but the malevolent right wing continues to maneuver to weaken the law. After the recent survival of the ACA, the Trump administration is threatening to withhold payments to insurers that aid low-income customers and to let Obamacare “implode.” Tom Price, head of the Department of Health and Human Services, has “made changes that would reduce benefits and the number of people signing up for coverage.” (New York Times editorial, July 29)

For now, activists know they must be vigilant and keep the pressure on the government. DC Metro ADAPT activist Laura Halverson vowed, “We’re not stopping. We know that the fight is not over, so we’re going to keep on keeping on.” (Alternet)