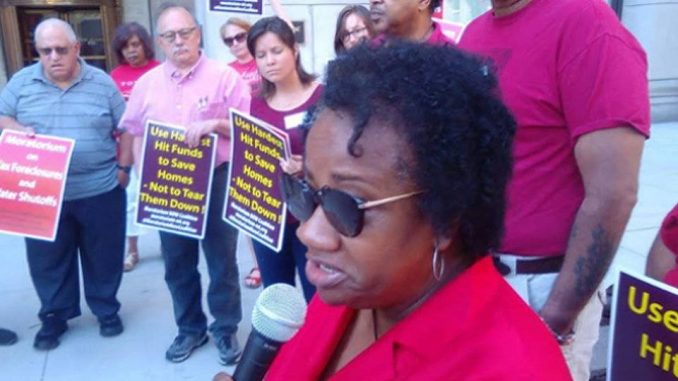 Despite glowing corporate media reports of Detroit’s comeback, families here continue to face tax foreclosures by the thousands. As of June 2017, over 3,400 occupied homes were in foreclosure, while tens of thousands of families were in unsustainable payment plans and subject to loss of their homes when a payment is missed.

An Aug. 1 hearing in the Michigan Court of Appeals was held to determine the appropriate court for a class-action lawsuit challenging the tens of thousands of illegal and racist tax foreclosures in recent years. The lawsuit was initiated in June 2016 by the American Civil Liberties Union of Michigan, the NAACP Legal Defense and Education Fund, and others on behalf of several neighborhood associations and residents.

The lawsuit charges that Wayne County, which contains Detroit, violated the federal Fair Housing Act through the disparate impact of foreclosures on people of color in a city where 80 percent of the residents are African American. The lawsuit also charges that the city of Detroit assessed homes at more than 50 percent of their actual market value, the upper limit set in the Michigan Constitution. In fact, some home are assessed at 10 times the market value!

At a press conference before the hearing, residents expressed support for the lawsuit. The speak-out was organized by the Moratorium NOW! Coalition and supported by the Coalition to Stop Unconstitutional Tax Foreclosures and Detroit Eviction Defense.

Errol Jennings, past president of the historic Russell Woods-Sullivan Area Association, described the magnitude and scope of the massive overassessments of homes in his neighborhood. Yvonne Jones, a retired city worker and lifelong resident of Detroit, decried the tremendous loss of more than 50 percent of African-American wealth in the city as a result of the foreclosure crisis of the past decade. Jones demanded that the foreclosures stop now.

Jerry Cullors, whose family almost lost their home to Bank of America, described the community fightback to stop his family’s eviction and demanded that the banks pay for the destruction of the neighborhoods. Jennine Spencer, vice president of the Charlevoix Village Association, emphasized that federal Hardest Hit funds must be used to save homes, not tear them down.

The Hardest Hit Fund, created by the notorious bank bailout of 2008 (known as TARP), was set up to assist families impacted by the bank-caused housing crisis that began in 2007. The fund was intended to provide assistance for foreclosure prevention and neighborhood stabilization.

Since 2010, Michigan has received more than $761 million in HHF money. But instead of providing any significant assistance with mortgage payments or property taxes, in 2014 the Hardest Hit funds were used to pay for tearing down abandoned and blighted foreclosed homes while Detroit was in bankruptcy.

For the cost of tearing down one empty home, approximately three to 10 occupied homes could be saved.

A delegation from the Moratorium NOW! Coalition spoke on July 31 at the monthly meeting of the Detroit Financial Review Commission during public comments. When Detroit exited bankruptcy in December 2014, the FRC was created with the power to overrule decisions by the mayor and City Council that, for example, might negatively impact bond ratings and offend Wall Street.

The speakers, including Moratorium NOW! members, objected to the irresponsible use of HHF monies for destroying instead of saving homes. Detroit Mayor Mike Duggan accused the speakers of spreading misinformation by claiming that rules requiring HHF be used to tear down homes.

David Sole, a city retiree who had just described the devastation on his block where most homes are gone or blighted, pointed out that the rules had been rewritten 14 times since 2010 and that the latest rules were written at the mayor’s request. The rules need to be rewritten one more time — in the people’s favor — and this time include assistance with delinquent water bills! A water shutoff is essentially an eviction.

Moratorium NOW! has launched an emergency campaign to save all occupied homes from the upcoming tax auction and to stop use of HHF for that purpose. For details, visit moratorium-mi.org.