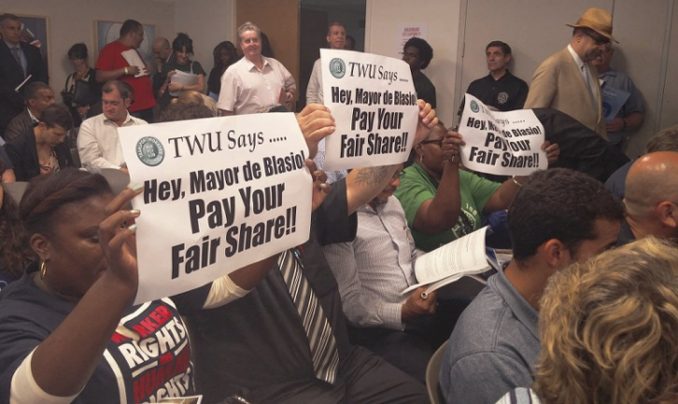 With New York City subways in crisis, the Metropolitan Transportation Authority board met again on July 26. Hundreds of people, including many with disabilities, came out to protest.

It doesn’t bother the MTA board that the transit fare now costs 55 times what it did in 1948. Or that only one-out-of-four subway stations are accessible to people for whom navigating stairs is a problem. (AM New York, July 20)

The MTA board’s fundamental job is to ensure that $2.2 billion in tax-free interest is paid to the banks every year on its $34 billion debt. (Gothamist, Feb. 12, 2015)

The day before the board meeting, MTA Chairperson Joe Lhota announced his plan to meet the subway emergency. Lhota, who was racist Mayor Rudy Giuliani’s right-hand crony, finally recognized that more workers had to be hired.

But Lhota’s other “solutions” include ripping out seats on subway cars to create more standing room. Workers, particularly the elderly, shouldn’t have to pay $2.75 to travel in sardine cans.

The MTA needs to order hundreds of new subway cars and buses. The R32 cars, for example, in service on the A, C, J and Z trains, are 52 years old.

Many of the subway lines are at least a century old. The MTA blames delays not on deferred maintenance but on commuters who drop litter on the rails, which can cause track fires. One MTA board member, Charles G. Moerdler, even called passengers who eat on the train “pigs.”

The MTA has actually guaranteed more litter by ripping out trash cans at several stations, including the very busy Main Street stop in Flushing, Queens. Lhota wants to crack down on littering “pigs” by encouraging the real pigs to hand out more littering tickets.

“Broken windows” police harassment won’t prevent derailments like the one in Harlem this June. And killer cops can’t use their weapons to fix and maintain the signal system.

At its meeting in May, the MTA board cut off public comments before all speakers had an opportunity to express their concerns, and its members left the room to finish their meeting elsewhere. It’s clear that most MTA board members are not listening to people’s concerns.

But the people demanded that they be heard, and on July 26 some 61 speakers signed up for public comments.

A member of Transit Workers Union Local 100, Vanessa Jones, brought to the board’s attention the physical and verbal abuse that MTA workers face from frustrated commuters.

A representative from the Access-a-Ride Reform Group (AARRG!), Yesenia Torres, called for a declaration of a state of emergency for the Access-a-Ride system until needed changes are made. Disability rights groups have been turning out for every meeting for the last three months. They said they will continue to pack the board meetings until their demands are met.

Steve Millies, a member of the Workers Defense Committee, added to this, saying it was outrageous that Chair­person ­Lhota’s plan did not include anything about the Access-a-Ride system.

The Workers Defense Committee, which formed on May Day this year to protect striking workers, is currently raising funds and helping with the legal defense of Darryl Goodwin, an MTA worker and member of TWU Local 100. Goodwin was charged with obstruction of justice, assaulting a police officer and resisting arrest for allegedly failing to help a New York Police Department lieutenant get through a turnstile in pursuit of a shoplifter. Police charged Goodwin even though all cops have MetroCards and gate keys and Goodwin was assisting a passenger at the time. According to MTA rules, assisting a passenger takes priority before helping anyone requesting gate access.

Other speakers criticized the board’s plan to expand the number of cops in the subway. They emphasized that the real crime was the high fare, and placed the blame on the banks and the enormous portion of the MTA budget that goes toward debt servicing.

“We hear in the media arguments about $450 million that’s supposed to come from the city … but that’s a drop in the bucket compared to the tens of billions of dollars that the MTA owes to the banks and Wall Street in debt service,” said Tony Murphy, another member of the WDC. “The banks are looting public transportation.”

It’s clear that the real representatives of the people were in the boardroom that day, but they weren’t the ones convened around the table. If all groups attending the meeting started working together, New Yorkers could have a real People’s MTA.