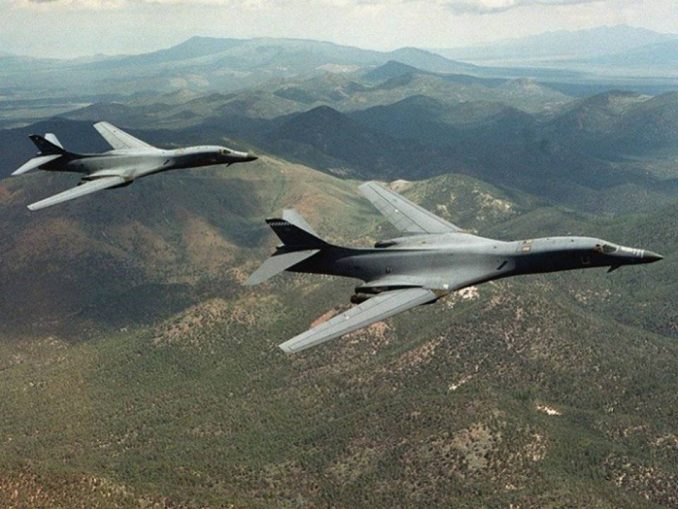 A pair of U.S. B-1B Lancer bombers, taking aim at the DPRK.

Well, well, well. It’s taken them far too long, but at last the editors of the New York Times have spoken up on Korea.

This newspaper of the imperialist, ruling-class establishment, which has been so closely embedded with U.S. foreign policy for over a century, is telling the Trump administration to “drop the bluster and dispatch Secretary of State Rex Tillerson or some other high-level envoy to Pyongyang to explore whether there is any basis for negotiations.” (New York Times editorial, Aug. 1)

Of course, the Times itself is guilty of a lot of “bluster.” Its reporting on the DPRK, like that of the rest of the capitalist media, routinely demonizes that country’s leadership. The Times also claims that China’s refusal to carry out punishing sanctions on the DPRK comes out of its fear that sanctions could cause the regime to “collapse,” sending millions of Korean refugees to China.

Dream on, Times. The DPRK is not about to collapse. Its leaders are not irrational or weak. And just as important, the independent government of the DPRK survived a horrible, devastating war from 1950 to 1953 along with almost seven decades of military and economic aggression from the U.S. because it has a strong Workers’ Party at the helm.

The DPRK has seen the horrible destruction that the imperialists try to wreak on a country that defies them. The Pentagon has reduced nation after nation to rubble to get the “spoils,” as Donald Trump recently admitted. Destroy the government, disable the country and then go for the profits — Afghanistan’s minerals, Iraq’s oil and cultural treasures, Libya’s oil.

The people of the DPRK take all this very seriously. They have long been on the U.S. hit list of countries that George W. Bush infamously slandered as “the Axis of Evil.” The Koreans need to have a strong deterrent, no matter the cost, to stop Washington from waging another war against them. So the scientists and technical workers of the DPRK have mastered the technology of building both nuclear weapons and an intercontinental missile delivery system that together can deter a U.S. attack.

The strategists for U.S. imperialism have completely exploded in frenzy over this. The media — including the Times — have speculated about the U.S. going to war, how many casualties there would be, and so on.

It seemed like the last thing the Times would consider is that maybe the U.S. should pull back from threatening to “decapitate” the DPRK — the stated objective of the Pentagon’s last round of massive war exercises in Korea. Maybe they should consider negotiations, maybe even — and this really sticks in their craw — sign a peace treaty with the DPRK to end the state of war that has existed between the U.S. and People’s Korea since 1950.

After the DPRK’s latest successful test of an ICBM, Sen. Lindsey Graham of South Carolina talked tough on NBC’s “Today” show on Aug. 1: “There is a military option to destroy North Korea’s [missile] program and North Korea itself,” blustered the senator.

But then he added, “You can stop North Korea militarily or diplomatically. I prefer the diplomatic approach.”

Make no mistake — imperialist diplomacy has the same objective as imperialist war. If negotiations are to take place, either openly or secretly, the DPRK will have to weigh every word very carefully before agreeing to anything with the treacherous and arrogant bunch of marauders who run the U.S. government.

But the Koreans know all that.

What’s important is that an influential section of the ruling class here has come to the conclusion that they need to “drop the bluster” — that is, the threats of nuclear annihilation that have come from Washington since 1950 — and get real. That’s a victory for the DPRK.