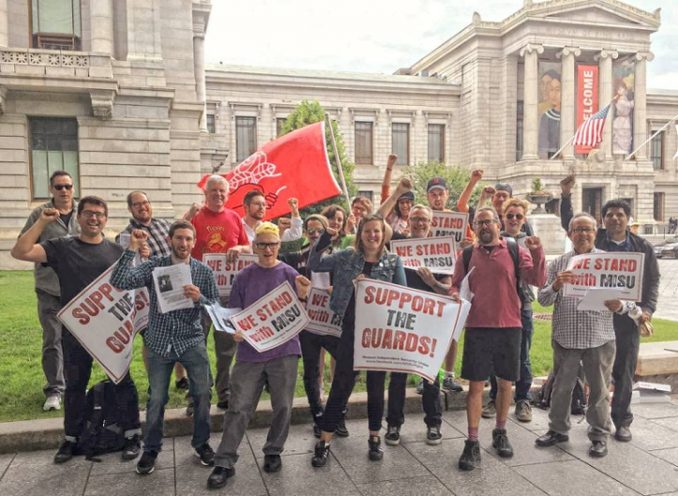 Boston — Over 50 art enthusiasts, community members and labor activists came out to a July 29 rally and informational picket in support of Carlos Oviedo, a worker recently fired from the Museum of Fine Arts here.

Oviedo is a member of the Museum Independent Security Union (MISU) and has been a guard at the MFA for more than 17 years. His firing comes amid the union’s communications with OSHA regarding asbestos concerns at the museum, making him the most recent victim of management’s search-and-destroy tactic. He is the fifth union museum worker to be fired over a two-year period for what the union insists are “non-issues.”

While the museum says Oviedo was late for a shift, the union has cried “foul.” Oviedo maintains he not only arrived on time for work, despite facing significant transportation delays, but also followed museum protocol by calling well in advance of his shift to let supervisors know that his Orange Line train was being taken out of service and he might be late. But because he wasn’t “in uniform” when he arrived for the guards’ roll call, he was marked as tardy for his shift and was fired.

Since 2016, the Orange Line — one of Boston’s subway lines serving many working-class communities across the city — has operated with more than half of its trains out of service due to disrepair. Despite receiving over $80 million in subway engine upgrades last year, Boston’s ailing subway system daily threatens the livelihoods of tens of thousands of workers like Carlos Oviedo, with track malfunctions, voltage spikes and train breakdowns. Why should workers, who already pay skyrocketing subway and bus fares, be answerable for tardiness they have no control over?

These kinds of miniscule infractions — often overlooked by most employers who depend on workers to make businesses profitable — are being used solely to target the union.

The rally on July 29, organized by MISU, was the third action pushing for Oviedo’s reinstatement. It is part of a larger effort to support MFA guards who are being threatened with multiple disciplines for their union activity as well as their communications with OSHA. Having recently won reinstatement for dismissed museum worker John Powhida, the campaign is gaining steam and is spreading to organized labor, social justice organizers and cultural workers, who can all relate easily to the issues at hand.

Genevieve Lechat, a Harvard union member and MISU supporter who attended the rally, explained that “union work is urgent as ever.”

“These workers stand all day,” she continued. “Their work has ergonomic, health and safety issues. When a rich institution like the MFA doesn’t do its share, workers need publicly funded services to get by while the ‘non-profit’ employer — whose director usually makes close to $1 million — accumulates more and more wealth, tax-free, giving nothing back to the community. The union is exposing that.”

Museum collections are guarded by workers of many nationalities with richly varied life experiences. Most have other jobs where they perform unpaid and underpaid work. They include artists, musicians, teachers, single parents, seniors, students and youth. Several of the union guards have worked at the MFA for more than 35 years, while many younger ones have been there less than five years. The union that proudly and vigorously represents them is led by MISU President Evan Henderson. Now 26 years old, Henderson has been a museum guard at the MFA since he was 21.

“The union has many pending grievances with the museum,” Henderson explained to Workers World. “The MFA is denying nearly every single one of them, which brings these grievances to the level of arbitration. Arbitrations are expensive for the union, and take a good chunk out of its finances. Museum management realizes it has much more money and power on its side and likely sees this as an opportunity to bankrupt the union and completely bust it.

“This is a very typical union-busting tactic,” Henderson further observed, “and it is very blatantly occurring right before our eyes.”

Organizers and supporters alike are hopeful they can win reinstatement for Carlos Oviedo and continue to educate the museum-going public about the MFA’s harsh retaliatory practices.

When asked how more people can support the campaign to reinstate Oviedo, organizers pointed directly to their fliers and emails, which ask people to “Demand justice for the guards!”