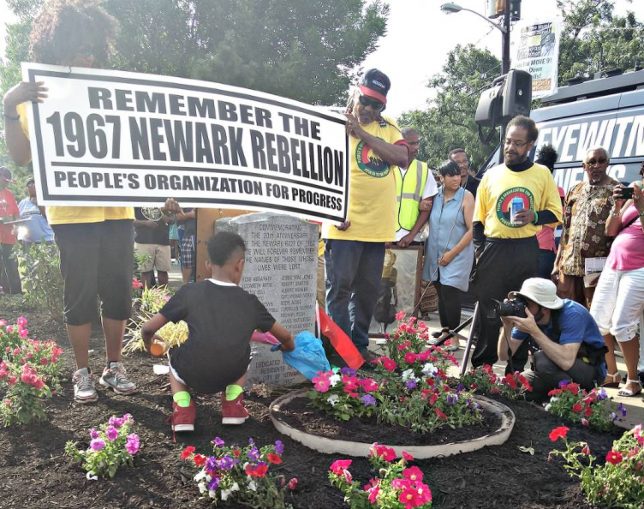 A child lays flowers on July 12 to remember the martyrs of the Newark Rebellion.

Over 100 people gathered on July 12 to commemorate the 50th anniversary of the 1967 Newark Rebellion against racism. People convened at a small triangle on Springfield Avenue, close to Irvine Turner Boulevard, where a monument has been erected.

The rebellion started nearby when cab driver John Smith was arrested and brutalized by police. The late poet, playwright and activist Amiri Baraka — father of Newark mayor Ras Baraka — was viciously clubbed by police during the uprising. Twenty-four people were killed.

The People’s Organization for Progress organized the rally. POP leader Larry Hamm spoke, as did Pam Africa from the International Concerned Family and Friends of Mumia Abu-Jamal. Hamm emphasized that the Newark uprising “was a rebellion, not a riot.”

Copies of the July 20, 1967, issue of Workers World newspaper were handed out. In that issue, the late Workers World Party Chairperson Sam Marcy declared that those gunned down by police “did not die in vain.” One woman bus driver stopped her bus to get a copy.

Despite the 90-degree heat, people marched to the 1st police precinct house on 17th Street, their ranks swelling to 150 people. Many organizations and individuals were represented, including the International League of Peoples’ Struggle and Workers World Party.