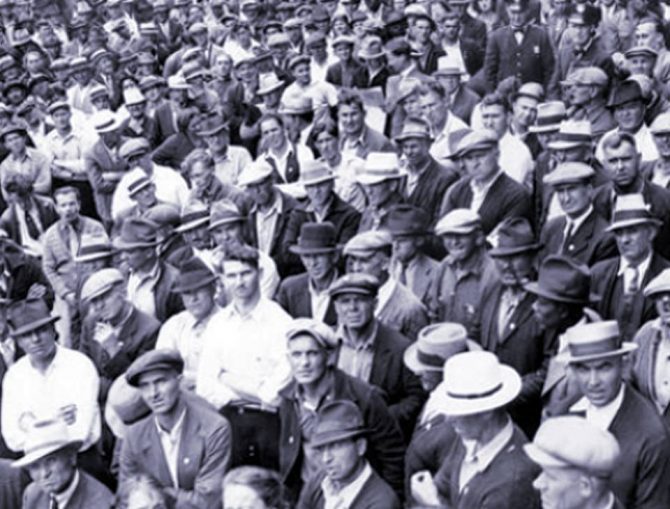 Strikers of Republic Steel leaving Cleveland City Hall in Ohio after being addressed by a leader of the Steel Workers Organizing Committee (SWOC), 1937.

In 1937, Youngstown, Ohio, had a population of 170,000. On May 26, almost a fifth of the residents — 33,000 workers — walked out on strike, bringing the mills of Republic Steel and Youngstown Sheet and Tube to a standstill. Youngstown was the heart of the famous Little Steel Strike, when 92,000 workers struck four anti-union steel companies that also included Inland and Bethlehem Steel.

From the beginning of the strike, mill owners implemented the Mohawk Valley Formula, a union-busting strategy developed by professional strikebreaker Pearl Bergoff during the 1935 Remington-Rand strike in upstate New York.

In this strategy, company unions, illegal under the 1935 National Labor Relations Act, were replaced with “independent” unions and a “Citizens Committee” was formed to oppose the strike. A “back-to-work” movement of “loyal employees” — usually mostly supervisors — attempted to sway the public against the strike and to demoralize the strikers. Vigilantes and special deputies supplemented the work of the police, and sometimes the military, in repressing the strike. Then a date was chosen to reopen the struck facility with great fanfare.

In Youngstown in 1937, with the strike just underway, the phony unions at Republic and Sheet and Tube had already acquired office space. Hundreds of their “missionaries” were visiting strikers’ homes. Sheriff Ralph Elser had deputized 100 men to break the strike.

June 19 was declared Women’s Day by the strikers. About 30 women, many with children alongside them, were picketing the gate at Republic. When a few sat down on some boxes situated a few inches onto company property, Police Capt. Charley Richmond ordered the women to move. When they didn’t move fast enough, he fired three shots into the air.

This was a signal to police to fire tear gas directly at the women and children. Striking men, meeting across the street, rushed over. Police fired over 200 tear gas grenades in less than two hours. Carloads of deputies started to arrive. By midnight, the deputies began shooting, leaving two strikers dead and over 50 wounded. The killings came just 20 days after the infamous Memorial Day Massacre, when Chicago police killed ten Republic strikers and wounded over 100.

The struggle to keep the mills closed

On June 21, company officials announced the mills would be reopened. Strikers telegraphed an appeal to President Franklin D. Roosevelt, urging him to prevent the reopening and “immediately intervene in this critical hour and avoid a calamity and disaster that Ohio may remember for decades to come.” (Mary Heaton Vorse, “Labor’s New Millions,” 1938)

The Youngstown steelworkers were then joined by 3,000 striking truck drivers. Supporters poured in from Ohio and Pennsylvania. As talks with the Mediation Board appointed by U.S. Secretary of Labor Frances Perkins collapsed, strikers began an all-night vigil, prepared to resist the opening of the mills. At 3 a.m., they learned there would be no reopening. Gov. Martin L. Davey, acting on orders from President Roosevelt, was sending the Ohio National Guard to strikebound cities, purportedly to maintain the status quo of closed mills. Strikers went home.

Then the mass arrests began. Strikers and sympathizers were dragged out of their homes and cars and arrested at funerals for the slain pickets. Possessing a knife, fork or toothpick were grounds for arrest. Strike leaders, who had persuaded pickets to go home, were accused of “inciting to riot.”

The union soon realized the Ohio Guard had come to break the strike. In the towns of Youngstown, Warren, Canton and Massillon, the troops — some of them quartered inside a Republic mill — beat up, gassed and arrested strikers.

On July 11, several hundred strikers and family members were gathered around strike headquarters in Massillon; children danced while a band entertained. Police appeared and ordered the driver of a vehicle to turn its lights off. They then riddled the car with bullets and began gassing and shooting as people fled in all directions. Three were killed and more wounded; again, state violence was followed by mass arrests.

Massillon Police Chief Stanley Switter later testified before the National Labor Relations Board that Republic’s district manager demanded to know why he hadn’t performed in the manner of the Chicago police.

The strike-breaking violence continued. In Beaver Falls, Pa., a union sympathizer was killed when a sheriff fired a gas gun at his head at close range. In Cleveland, a picket was crushed against a fence by a scab-driven vehicle.

The brave strikers held out, but by August the strike was broken and the mills were running full steam. Hard-nosed union-buster Tom Girdler of Republic and his cohorts accomplished their immediate goal of keeping their mills union-free.

Yet the ruling class failed to achieve its broader goal of pushing back the militant Congress of Industrial Organizations. By December 1937, the CIO’s Steel Workers Organizing Committee had organized over 800 mills and shops and negotiated nearly 450 contracts. Not even three years old, the CIO had signed on nearly four million members.