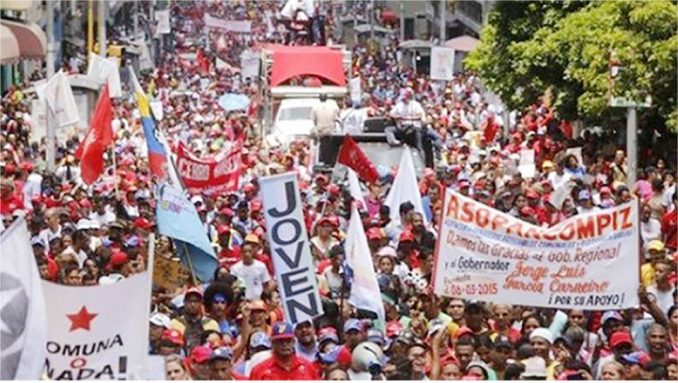 Venezuelan commune movements march in support of the upcoming Constitutional Assembly and the struggle for the Bolivarian Revolution.

In Mexico, the government of Enrique Peña Nieto ignores the just demands of the mothers and fathers of the 43 Ayotzinapa student teachers and continues to kill, threaten and snoop with illegal eavesdropping — as in the Pegasus case, which involves Israeli software sold to the Mexican government for the surveillance of journalists.

In Honduras, activists continue to be murdered.

Yet the Organization of American States doesn’t even mention these crimes and instead attacks the Bolivarian government of Venezuela, calling it repressive and covering up what is really going on in that country.

It is U.S. imperialism — which in the first place created the OAS in 1948 to subjugate the peoples of Latin America and the Caribbean — that is using it now to promote an aggressive campaign against Venezuela. Since April, when the OAS illegitimately discussed the situation in Venezuela — in the absence of the Venezuelan representative — the OAS has convened two more meetings to justify an intervention in the Bolivarian country. But such discussion violates Article 1 of the OAS Charter itself, which states:

“The OAS has no powers other than those expressly conferred on it by the present Charter, none of whose provisions authorize it to intervene in matters within the domestic jurisdiction of the Member States.”

But for its hostile campaign against Venezuela, Washington depends on the rightist liar Luis Almagro, who as OAS Secretary General leads that intervention with the active support of the governments of Mexico, Argentina, Brazil, Colombia and Peru, among others.

We need to remember that the National Electoral Council has already published the municipal election agenda for December 2017, but the opposition is trying to unconstitutionally accelerate this process. The so-called “political prisoners” have been responsible for destabilizing the country and for 43 deaths caused by their calls for violent “guarimbas” (street clashes) in 2014.

But the attempts of imperialism to attack Venezuela through the OAS have so far failed. In the last two meetings — on May 31 in Washington, D.C., and on June 19-21 in Cancún — Almagro failed to obtain the majority vote needed to approve intervention. These plans also include the intention to suspend the processes begun by President Nicolás Maduro on May 1 for the July 30 election of members to the Constitutional Assembly. The final aim is to secure the necessary international diplomatic cover to force foreign intervention in Venezuela with the pretext of solving a “humanitarian crisis.”

What the media hides

This intervention is at the level of “international diplomacy” that under the guise of seeking “democracy” reflects what’s happening on the ground. Together with the Venezuelan counterrevolutionaries, the U.S. is attempting to force regime change. Under headlines such as “Crisis in Venezuela,” the news media want to project the image that “the people” in general oppose the government.

This could not be further from the truth. The fact that these media hide what is really happening is in itself a crime of gigantic proportions. They try to justify the right-wing terrorism against people who support the revolution and the vandalism that destroys state institutions providing basic services of transportation, health care and education to citizens. As a result of violent actions that began on April 1, according to reports from Venezuela, around 90 people have died and more than a thousand have been wounded. (tinyurl.com/ya6wqsbe)

The international media omit the details of the cruel methods of the counterrevolution’s violent confrontations that illustrate its aggressive nature. The demonstrators are described as peaceful people who only want a country in peace. But while the forces of the Bolivarian state are prohibited from using their weapons against demonstrators, and may only use tear gas and water cannons, the counterrevolutionary terrorists are attacking with deadly homemade weapons.

The media omit reporting the findings of the Sebin, the Bolivarian National Intelligence Service of Venezuela, which has been apprehending and dismantling some counterrevolutionary cells.

For example, in early June the Sebin captured Yeison Rodriguez. An article from Telesur on June 10 reported that Rodriguez was “accused of engaging in violent acts and assaults in several communities in Caracas (the capital) and in Miranda state (center) …. According to the director of Sebin, they obtained evidence of plans to attack members of the Bolivarian National Armed Forces as a political target, accompanied by recordings of telephone conversations that Rodriguez held with several people, evidence of their participation in the actions carried out by the treasonous squads financed by the opposition.”

“The Sebin director also said that Plaza Altamira, located in the Chacao municipality, governed by opposition mayor Ramón Muchacho, is the center of operations of reactionary opposition sectors.

“In turn, he warned about the existence of evidence that shows the connection of the citizen Yeison Rodríguez with the government of Miranda state, which is in the hands of the opposition leader Henrique Capriles.”

Violent groups fired incendiary bombs at the Carlota Air Base on June 22. They alleged that a young man was shot and killed point blank at the hands of an Air Force sergeant guarding the base. The opposition has spread this story as “proof” of government repression.

After investigations, the person who was identified as responsible is being subjected to relevant legal processes.

However, it’s necessary to emphasize the following: What is happening in Venezuela is a strong counterrevolutionary attack trying to overthrow the legitimately constituted government. It is a coup attempt.

How do you respond to an attack on a military base? We must point out that the counterrevolutionaries have tried at least 10 times to attack the base.

Felipe Marcano makes an interesting claim in his article “La Carlota, military base under siege; Why insist on its ­assault?”

The author writes: “The siege of the military base of La Carlota, in the capital of the republic, its assault and the seizure of its facilities by ‘peaceful, defenseless, young, heroic demonstrators’ seeks: the demoralization of the FANB (Armed Forces of the Bolivarian Nation) troops, their dissatisfaction and withdrawal of support for the Nation State and the Bolivarian Constitution, and to provoke a bellicose and forceful response from the government, so as to expose it as a failed Nation State drifting into national and international turmoil, using this as a pretext for foreign intervention to overthrow the government and the republican institutionality.” (aporrea.org, June 24)

If we recall the beginning of the Cuban Revolution with the assault on the Moncada Barracks in 1953 — in that case on behalf of the poor and exploited people, unlike the counterrevolution in Venezuela that operates to benefit the oligarchy and imperialist powers — we will realize the importance of an attack on military installations.

The total lack of coverage by the corporate media of what is happening in the inner base of the revolution, the poor neighborhoods, is also significant.

The actions of the masses concern not only their demonstrations in defense of the revolution, but above all their daily life and strong decision to guide the country on a path of peace, working daily, developing skills, building the homeland, as people say there.

And, above all, emphatically ­rejecting the violent processes of the counter­revolution.

It is these core people who are the key to success. Hence the importance of the Constitutional Assembly, which would give the people the opportunity to forge their own future and to deepen the revolution.

The situation in Venezuela is highly complicated. The Bolivarian revolutionary process and its future are currently the main topic of debates throughout Latin America and the Caribbean.

Revolutionary groups and parties analyze not only present and past events, but the very behavior of the revolutionary government — its successes and its errors, its deviations in deepening the revolution toward socialist development — and many even offer recommendations.

These analyzes run from the most critical of the government of Nicolás Maduro to those who excuse all its actions. What unites the great majority of these analysts is their defense of the Bolivarian process in the face of the U.S. imperialist onslaught.

Today they see this process as crucial for the very survival of the progressive gains and movements in the region.

Along with these debates, there has been a great wave of solidarity with the govern­ment and with the Bolivarian people.

These expressions of solidarity include messages, street actions, forums, resolutions and statements from governments such as Cuba, which show unconditional support for the revolution. One of the most recent solidarity actions came not from Latin America but from Mozambique in Africa.

It is up to the progressive movements in the United States to increase and expand their solidarity with the Bolivarian revolution by exposing, denouncing and combating the imperialist policy of the Pentagon, the White House and Wall Street.

Say no to the intervention of the OAS/USA in Venezuela!

Long live the Bolivarian Revolution and the international peoples’struggle!