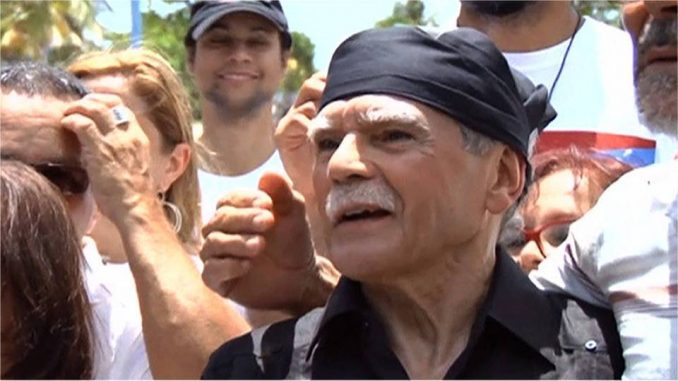 Oscar López Rivera’s presence in circles of the Boricua diaspora at this crucial moment in the history of Puerto Rico represents a great boost towards the unity and the advancement of the struggle for decolonization and independence as the only way forward for true sovereignty.

Many meetings and events were held during the days prior to and after the June 11 parade, not only with the diaspora, but also with labor and other activists. One was a breakfast sponsored by the SEIU Local 1199 of health care workers, where several well-known figures attended, including renowned sister Pam Africa.

In May, the Parade Board had decided to dedicate the parade to López Rivera and nominated him as National Freedom Hero. Within days, most of the corporate sponsors — Coca-Cola, JetBlue, Goya Foods, the Yankees, Univision, etc. — withdrew their sponsorship. Police, firefighters and other groups associated with “law and order” or sympathizers of the pro-statehood status formula refused to attend.

Puerto Ricans who favor independence then launched a boycott campaign aimed at these firms’ social media. Many of those commenting expressed their satisfaction, stating, “We got our culture, our parade, back,” referring negatively to the commercialization of the parade in the last decades.

The result was a magnificent demonstration of Puerto Ricans’ fierce determination to prevail despite the criminal attacks of the colonial powers. Thousands of Boricuas attended. Floats and contingents did not simply advertise commodities as in the past, but carried signs and banners demanding independence. They demanded the ousting of the dictatorial Fiscal Control Board, the “junta” that the U.S. Congress set up as a collection agency to  grab the enormous — and illegitimate — debt that has been imposed on Puerto Rico.

It was not just a Puerto Rican Day Parade. It was a protest, a march for sovereignty and independence of a nation. López Rivera, standing on a float in the front of the march, was able to appreciate the enthusiasm of a rebellious diaspora in the very heart of Wall Street’s city.

Testimony at the U.N.

That same enthusiasm surrounded López Rivera when he testified at the United Nations on June 19. Received with a standing ovation, he spoke movingly for 20 minutes — a special time concession. The Puerto Rican governor’s representative criticized this concession.

Below are excerpts of his presentation, entitled:

“What has United States colonialism done to Puerto Rico and the Puerto Rican people?”

“Today there are over five million Puerto Ricans living in the diaspora, while there are less than three-and-a-half million living in Puerto Rico. … I have seen an accelerated gentrification process constructing condominiums costing one million dollars or more.

“Since I am familiar with what gentrification does to poor people, I know the luxury condominiums are not being built for them. … In Culebra, Vieques and around the coast of Puerto Rico, where the beaches are the most beautiful, the construction of luxury building is already overtaking the landscape.

“The colonialists who administer the colony give incentives to the builders and to buyers who are foreigners, and deny providing incentives to [Puerto Rican] small businesses and small home owners.

“It has been the goal of the U.S. government, since it invaded and occupied Puerto Rico, to depopulate it. … And the last wave began 17 years ago. More than one million Puerto Ricans have moved to the diaspora, causing the biggest brain drain in Puerto Rico’s history, because most of the emigrants are professionals. … If the School of Medicine in Puerto Rico graduates 100 doctors, 85 percent of them have to emigrate.

“Any country that loses two-thirds of its population, including its best developed human resource, cannot see itself having a strong economy and good quality of life for its citizens. …

“What the Fiscal Control Board is making the colonialist administrators of Puerto Rico do is more worrisome. … By August, 169 schools will be closed. Teachers will be losing jobs, and communities, especially the poorer ones, will be losing their schools. Behind the scenes, the colonialists are pushing more and more their privatization plans. They aren’t satisfied that privatization in Puerto Rico has played a major role in bringing the economy to its worse conditions in Puerto Rico’s history. …

“It is threatening the future of the University of Puerto Rico. The goal of the Fiscal Control Board is to take away close to half a billion dollars from the university’s budget. At the same time, it is looking for ways to raise the tuition and to force the University of Puerto Rico to close some of its eleven campuses and to sell much of its property, especially land that it has been using for experiments in the past.

“What the Fiscal Control Board seems to be doing is trying to privatize the university system. All the money that will be taken away from the public education system will be used as payment to fill the coffers of the banks and hedge funds. While Puerto Ricans will be poorer and more destitute, the colonialists and the banking industry will become richer. Thus, Puerto Rico is being made poorer and poorer and at the same time depopulated of its native population.

“In spite of the fact that the future of Puerto Rico looks very bleak, many Puerto Ricans believe this is the best moment to wage an effective decolonizing process. We know that the majority of Puerto Ricans love Puerto Rico, our national identity, our culture, our language and our origins. We see the potential that Puerto Rico has to become a strong nation and an asset to the economy of Caribbean and Latin American countries. We have the human resources and the other basic resources to transform Puerto Rico into the edenic garden it has the potential of being.

“I hope you will do whatever you can to bring to an end the colonial status of Puerto Rico, to help us make Puerto Rico the nation it has the potential of being, and to be part of the community of nations.