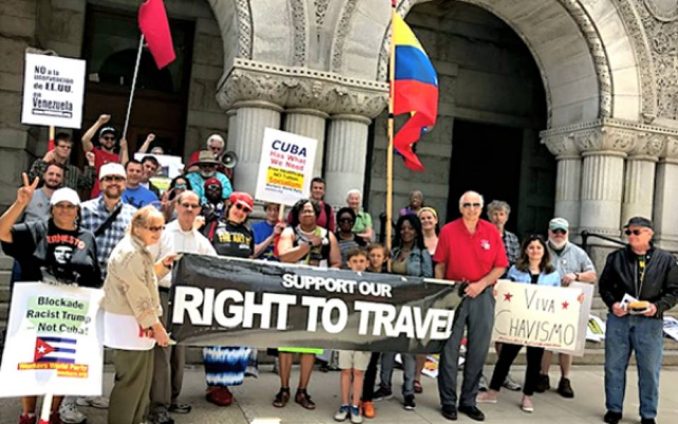 In a spirited display of internationalism, dozens of Milwaukee residents participated in a “Trump, Hands Off Cuba and Venezuela” rally June 24 at the U.S. Federal Courthouse.

The rally honored the late president of Venezuela, Hugo Chávez. As buses driven by members of Amalgamated Transit Local 998 rolled by the rally site, speakers noted that current President Nicolás Maduro is a former bus driver.

In contrast, within the USA, oppressed people in particular suffer daily from lack of access to basic human needs and face epidemic levels of police terror. These occur despite Trump’s, and before him Obama’s, rhetoric and lecturing other nations on “human rights.”

Just days before the June 24 rally, the police officer who murdered 23-year-old African-American Sylville Smith last August in Milwaukee, was acquitted by a jury. Smith is one of dozens of Black and Brown people the Milwaukee police have killed, raped and terrorized with impunity in just the last few years.

In socialist Cuba, on the contrary, people of African descent, Indigenous and other oppressed people, women and LGBTQ people are guaranteed basic human rights. Efforts are ongoing to overcome 500 years of colonialism and neocolonialism on the island. Similar efforts are being made in Venezuela.

Speakers noted how Venezuela now uses its oil profits to benefit the poor and working people of that country. Even in the United States when oil prices were high, many workers benefited from the free or discounted oil that Venezuela’s state-owned company CITGO provided. Especially during winter, access to this subsidized heating oil was a life-and-death matter.

In the spirit of the late President of Cuba, Fidel Castro, the June 24 Milwaukee rally brought together a united front of poor and working people to declare to Trump and his Wall Street backers: End the U.S. Blockade of Cuba Now! Hands Off Venezuela! U.S. Out of Puerto Rico!