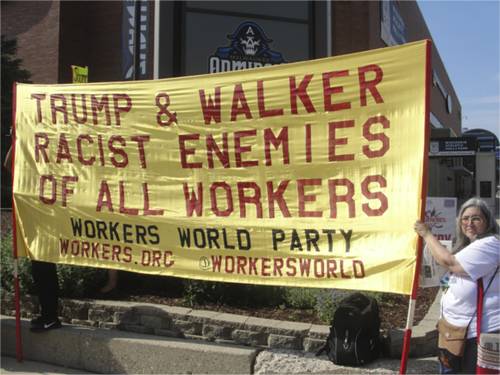 Dozens of angry protesters joined a demonstration against Donald Trump and Scott Walker in Milwaukee on June 13. Sponsored by Fight For $15 Wisconsin, the “Low-Wage Walker” protest included members from a diverse variety of organizations including the Milwaukee Teachers Education Association, the American Federation of Teachers, Service Employees, Amalgamated Transit Local 998, other unions and worker organizations, community organizations and political groups such as Workers World Party. Donald Trump came to Wisconsin on June 13 to “tour” the Waukesha Technical College and then to be a speaker at a fundraiser at the local Hyatt hotel for Scott Walker’s third gubernatorial campaign. Both racist, anti-worker politicians were protected by Milwaukee cops and sheriffs and other repressive state forces, but this didn’t stop protesters from engaging in an hours’ long militant protest.