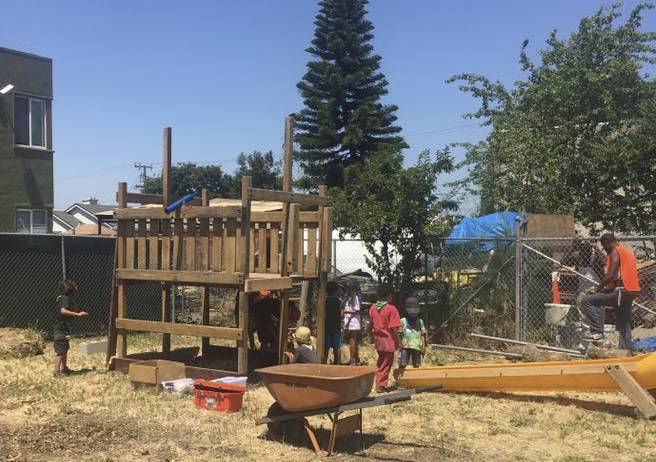 Oakland, Calif., June 19 — As part of a national call by the BlackOut Collective and Movement Generation — called “40 Acres 40 Cities Juneteenth 2017” — local Black leadership of these groups took over a vacant lot at the corner of MacArthur Boulevard and 76th Avenue in deep East Oakland. This action is part of the Black Land and Liberation Initiative.

The national call, published on the Movement for Black Lives website, m4bl.net, said in part: “On Juneteenth 2017 (Monday, June 19th) Black people across the country will be taking back land and reclaiming space, from vacant lots to empty school buildings. We are taking back land that should be used for the good of the people, land that has historically been denied access to Black people. Through these actions we will confront the institutions that have been built off the extracted wealth of Black bodies and Black land and the individuals who have profited from them.’’

They explained “Why June 19th” with “Juneteenth is our time to be celebrate our formal emancipation from chattel slavery and to remind ourselves that we still ain’t free. It is a time to recognize all we have done for ourselves, all we have built for ourselves, all we have given the world and all of our resilience. At the same time, we remind ourselves that we must continue the fight for true reparations that includes both making amends for past harm and repairing our relations so that such harm doesn’t continue and never happens again.”

Workers World spoke to Quinton Sankofa of Movement Generation, one of the leaders of the Oakland action. He explained how this initiative was rooted in discussions his group had had with the BlackOut Collective dating back to late 2015. Movement Generation brings an ecological perspective to the struggle for Black liberation.

Again from the national call: “We see Black folks collectively engaging in land reclamation with the goal of shifting our relationship to the land, engaging in healing while creating hubs for movement work to be housed, cultivated and birthed.”

Sankofa talked about their considerations on “how do we take and reclaim the land.” He said Oakland is one of the most rapidly gentrifying places in the country and added that just as the current president of the U.S. doesn’t try to couch his objectives with moderate terms, it is necessary for Black people to be bold and assertive in challenging how land is owned, managed and used.

The lot they took over on June 19 is owned by a nonprofit called Hello Housing. It’s one of a number of lots the city of Oakland repossessed and then sold, 34 of them going to Hello Housing for $13,500 each. Movement Generation and the BlackOut Collective see this takeover as a test case for reparations, said Sankofa.

Sankofa described step one of their process was to notify the community that the land should be given to the community for free, not bought and sold. They would like to center this initiative on the most oppressed, those who don’t have homes. He said there should be no rent, just free. He talked about how 80 percent of homeless people in Oakland are Black.

Today’s action, as described by Sankofa, was the opening of a park, in the short term, with a play structure they were already almost finished assembling, plus a community bench and a community mural. They intentionally are installing semi-permanent structures that are hard to remove, until the community decides what to do with the lot for the long term. They had removed a couple of gates in order to enter the property that morning.

Sankofa emphasized that they were demanding productive reparations, not just consumptive. He said their target was not Hello Housing. Instead, they are targeting capitalism itself, including private property ownership, anti-Black racism and the myth of white supremacy.

As he spoke, in addition to the building and assembly which was underway by various volunteers, some children were on-site. The children were given free bag lunches and were led in various children’s activities by teen and adult volunteers. A community barbecue was planned for the evening.