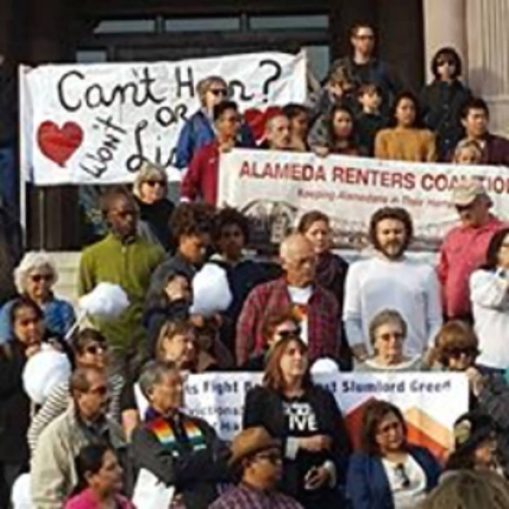 Oakland, Calif. — Recently, the 12-square-mile island of Alameda in the San Francisco Bay Area has been overrun with aggressive signature collectors, spouting slogans about “democracy and voting rights” in an attempt to dupe people into signing a petition to end just-cause renter protections.

For many of the 56 percent of Alameda residents who rent, this protection of the basic human right to housing came after years of fighting unlimited yearly rent increases hiked up on units with poor maintenance. Hundreds of Alameda’s families have also been evicted for no reason in the past, so that money-hungry owners of multiple properties can double rent amounts.

GoCo, a notorious, for-profit, signature-gathering company, has hired young people who are desperate for work to go into Bay Area communities to collect signatures in order to overturn basic renter protections. Tactics they are trained to use include lying and intimidation, some recently captured on tape. Landlords, hiding behind front groups created to obscure transparency and accountability, use these dishonest tactics, fostered by the California Apartment Association, in an attempt to ensure unlimited income with little or no effort on their part.

However, if the petition signature gatherers are able to gather 5,000 legitimate signatures, more families will be needlessly put out on the street again between July and November, when the issue would again come up for a vote.

The stress on renters has intensified as wages have remained stagnant, and locals unable to find housing are moving further away from their jobs and paying more money for housing, while having longer commutes to work. The number of Alameda food pantry users has increased exponentially as renters who manage to secure a local unit find themselves spending a majority of their income on rent. (thealamedarenterscoalition.org)

To add insult to injury, management of the local shopping center, South Shore, has allowed paid signature gatherers to harass shoppers in front of two grocery stores, while denying local members of the Alameda Renters Coalition opportunities to provide signature removal forms to people who signed as a result of being misinformed. This is in clear violation of a 1980 Supreme Court ruling (Pruneyard Shopping Center v. Robins) which states that all California privately owned shopping malls must allow all individuals to speak and flier in common areas.

Many long-term legal challenges to the wrongdoing of multiple institutions lie ahead. But in the short term, keeping children and elders in their homes is a first priority, necessitating all hands on deck to inform friends and neighbors of the falsehoods being circulated so that enough signature withdrawal forms can be submitted to the city clerk before the petition signatures are vetted.