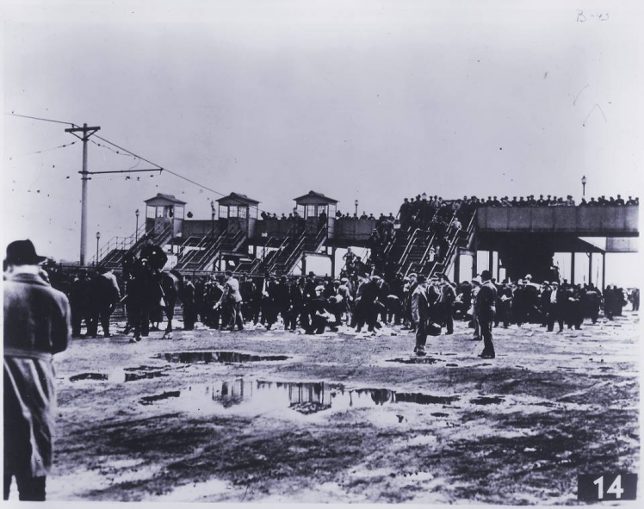 May 26 marked the 80th anniversary of a bloody example of capitalist violence against unions: the “Battle of the Overpass.” The world was exposed — and not for the first time — to the brutality of a U.S. fascist by the name of Henry Ford.

From 1935 to 1937, organized labor was on the march. Hundreds of sit-down strikes had won union recognition in a range of industries. A 44-day occupation of General Motors plants in Flint, Mich., forced the world’s biggest corporation to recognize the United Auto Workers. A 31-day strike forced Chrysler to follow suit. The organizing of GM and Chrysler, along with smaller auto companies and parts suppliers, brought 400,000 members into the UAW.

Ford had introduced the moving assembly line in 1913. “Fordism” was synonymous with a ruthless production system that assigned every worker to a mindlessly simple task, such as attaching a specific part or installing one screw. Ford workers were fired for little infractions, such as sitting down or talking.

Ford ran his dictatorship with his second-in-command, Harry Bennett — a prizefighter whom Ford recruited to run the “Service Department.” The department would routinely beat up union supporters inside the plants.

Bennett’s goons were involved in the violent assault on the 1932 Ford Hunger March, which was called by the Unemployed Council and the Communist Party. Five workers were murdered and scores more were injured and arrested. The massacre took place outside the massive Ford Rouge complex, the heart of Ford’s operations in the Detroit suburb of Dearborn.

Dearborn was a company town; the mayor was a cousin of Henry Ford. “Handbill distribution” was illegal without a special permit. Nevertheless, the UAW secured a permit to distribute leaflets on May 26, 1937. The headline on the flyer was “Unionism not Fordism.”

The union’s Women’s Auxiliary planned to distribute on an overpass, crossing Miller Road, that workers used to enter the plant. The location was just a short distance from the site of the 1932 tragedy.

An advance team of UAW officials and volunteer organizers arrived to greet the women. They were joined by news reporters and sympathetic clergy.

As they climbed the stairs leading to the overpass they were immediately set upon by Ford’s Service Department. Local 174 President Walter Reuther was clubbed, kicked, dragged by his feet down two flights of iron stairs, and picked up and slammed to the pavement repeatedly. Bob Kanter and Tony Marinovich were thrown from the top of the overpass to the street 30 feet below; Marinovich suffered a brain injury. Richard Frankensteen was grabbed by the arms and legs and kicked in his privates. William Merriweather’s back was broken.

While the beatings were in progress, the Auxiliary arrived by streetcar with armfuls of leaflets. Auxiliary Commander Catherine “Babe” Gelles attempted to pull three Service Department men off a union man. The heroic Gelles was also the founder and leader of Detroit’s Women’s Emergency Brigade. It was patterned after the militant Flint Brigade, which played a pivotal role in the GM sit-down.

Gelles and the other women were beaten mercilessly and called sexist slurs. Altogether, 60 people were injured, some permanently. East Side Regional Director J.J. Kennedy later died of his wounds.

Although the goons asserted that they were on private property, the overpass in fact belonged to the city of Dearborn. Thinking he could cover up his role, Henry Ford claimed that “loyal Ford employees” committed the violence.

Photographers and reporters were beaten, their cameras and notebooks confiscated. However, one photographer managed to toss his camera into a waiting car, which sped away with the damning evidence. What became known as the “Battle of the Overpass” was front-page news the next day in Detroit. Ford stopped advertising in Time after the magazine made the battle a feature story.

Leafleting continued even after the May 26 bloodbath. Despite the fascist-like atmosphere inside the plant, Ford workers continued to sign up to join the UAW.

After a hard-fought, seven-day strike, in which African-American union and community leaders played a critical role, the UAW finally won recognition at Ford in 1941.