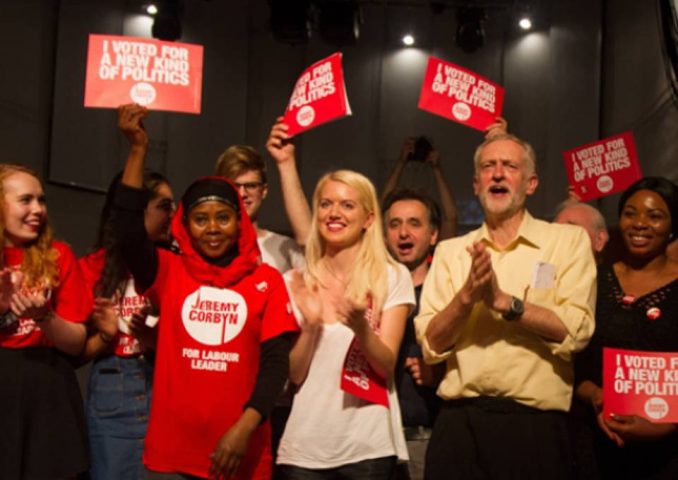 Young people were the strongest backers of Jeremy Corbyn.

Signaling a turn to the left in the British electorate, Prime Minister Theresa May’s Conservative Party was dealt a stunning setback in the June 8 snap elections. She herself had scheduled the vote in a mistaken belief she would increase her party’s majority in Parliament.

The Conservative or Tory Party went into the election holding a small majority of 331 seats out of the 650 seats in Parliament. The second-place Labour Party held 232 seats and the Scottish National Party 56 seats, all in Scotland. The last election had been held in 2015.

Britain operates on a parliamentary system, where the party that receives the majority of seats gets to select the prime minister and can pass its desired legislation. While the next scheduled elections had been set for 2020, May believed she could strengthen her hand by calling early elections. She was so wrong.

The Tories won only 318 seats this election, a loss of 13 and eight seats short of a majority. That means it will need to form a coalition to run the government. There is speculation that May will try to form a bloc with the Democratic Unionist Party, which won 10 seats in the British-occupied provinces of Ireland. (Sinn Fein won the seven other seats there.) The DUP is an openly anti-Catholic and pro-imperialist grouping that has operated paramilitary gangs to fight against Irish freedom.

The Labour Party won 30 additional seats this election, and now has 261. What’s important about the vote is not that it puts Labour close to being in office but that it shows a change in the consciousness of the British electorate.

It is all the more important because the Labour Party’s leader is their furthest left representative to be in Parliament in recent decades. Jeremy Corbyn campaigned on a program of renationalizing industry, taxing the rich, ending “austerity” and increasing funds for social programs for the working class.

Because Corbyn has joined efforts to halt British and U.S. military adventures in Iraq, Libya, Syria and elsewhere, and because he was the first to invite Gerry Adams of Sinn Fein to speak in Parliament decades ago, the Tories have baited him as a friend of the Irish Republican Army, of Hamas and Hezbollah, besides being a flaming Marxist who supports LGBTQ rights.

Not only have the Tories and the overwhelmingly right-wing British corporate media attacked him relentlessly, but so have the majority of Labour’s elected representatives, who belong to the openly pro-imperialist Tony Blair wing of the party.

Corbyn’s support has come from sections of organized labor and especially from the new youth who have flooded into the Labour Party to make this election a big gain for the party.

Corbyn is baited by the right wing as a Marxist. A sober Marxist view of British imperialism, however, would have to take into consideration the limitations of the electoral struggle in a powerful imperialist country whose banks participate in the domination of the world economy and whose nuclear-armed military intervenes in Africa, Asia and Eastern Europe.

Whoever controls Parliament, the British billionaires control the media — including the great portion of the British media owned by Australian billionaire Rupert Murdoch — as well as the military and the monarchy through their money and the centuries of connections between the bourgeoisie and the aristocrats. The ruling class controls the state apparatus. The Labour Party itself has been completely loyal to British and world imperialism, even if the Corbyn wing has criticized British aggression and condemned Tony Blair as a war criminal.

The extent of the success in this election cannot be judged by something Corbyn said or didn’t say in his latest speech. And that would be true even if Labour had won a majority.

As a measure of the mood of the British workers, however, the election is a refreshing move to the left, far away from the June 2016 referendum in which a majority opted for Brexit and gave a boost to the most right-wing and xenophobic elements in the U.K. Independence Party and the Conservative Party.

UKIP, the most vicious anti-immigrant party, had nearly a complete wipeout in the June 8 elections.

Momentum, the organization that incorporates the youth wing of the Labour Party and is allied with Corbyn, organizes to promote its own program. It calls for a transfer of the wealth of the rich to the workers and poor and agitates against all forms of discrimination, and has received a shot in the arm from the setback for both the Conservatives and the Blair wing of Labour.

For the short term, the election gives encouragement to all those in Britain who fight against the war in Syria, who are for maintenance of the National Health System, who are pro-working class and who defend the rights of immigrants.