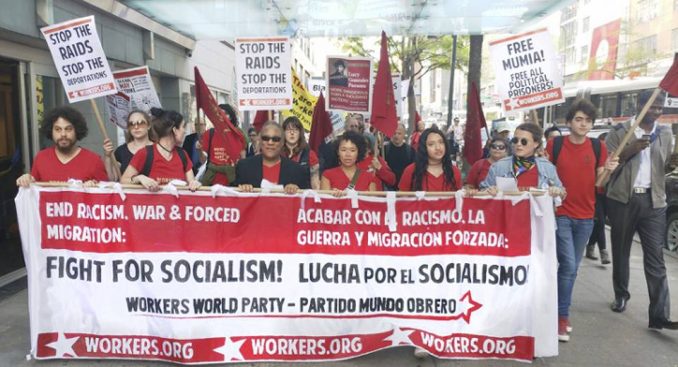 The following excerpts are from a talk given by Faiquan Sells at a May 20 Workers World forum in New York City titled “Black Lives Matter, Trans Lives Matter, USA out of Everywhere!”

Continuing countless imperialist wars; executive orders banning citizens of whole countries (which are all in either Africa or the Middle East); a constant threat to your health care being taken away.

A system that only works to keep all wealth and resources in the hands of 1% of the entire population, while everyone else is left to find means to survive in a system that was meant that they do the exact opposite.

A system where health care, education, property ownership and resources are privileges for the wealthy few instead of basic rights for all. This economic system, capitalism, was never meant to benefit the working class.

Capitalism was never meant to benefit the poor. And every single U.S. president, every single U.S. politician who is currently holding, or has held, elected office in this country, is a champion of this system, while at the same time voicing crocodile tears of concern for the people.

The current president of the United States, Donald Trump, is continuing what imperialists and capitalists have been doing in this country since the late 1400s: exploiting land that doesn’t belong to them (North Dakota pipeline, invading Middle Eastern nations for no good reason, etc.), enacting legal racism (banning citizens from six Black and Arab countries, deporting immigrants, etc.), continuing decades long wars in the Middle East and elsewhere, policing other nations that the U.S government perceives as hostile to U.S “national interests,” among so many other atrocities that are so numerous, I would lose patience listing them all.

Fortunately, all of the above is making it easier for socialist organizations and parties to attract younger people! According to Motherjones.com and splcenter.com, the number of socialist organizing committees and organizations as a whole has nearly doubled since Donald Trump has been elected. The major contributing factor in this spike in membership is people between the ages of 18-34.

Membership of various communist organizations, including Workers World Party, has increased primarily due to the fascist, sexist, homophobic and racist positions that the Trump administration represents. It is important to note that what Trump represents, capitalist and imperialist forces also represent, and young people are taking notice. And they are fucking tired!

Tired of the tax dollars coming out of our paychecks, which we are already getting shortchanged out of anyhow working to make the CEOs rich, and funding imperialist wars overseas which we did not agree to support or partake in whatsoever.

I still can’t, to this day, understand why men make decisions regarding women’s bodies. The young masses are tired of the same bullshit that capitalist politicians, Democrat and Republican alike, spew out on the campaign trail, only to get elected and not do a single damn thing for the constituents who elected them.

A renewed interest in socialism

The renewed interest in socialism and communism among young people is vital, as we are the ones who will carry the torch and continue the fight for socialism. If there is no one to continue our struggle, if there is no one to continue fighting for socialism, then there will be no more fight for socialism. In that regard, I am personally thankful for the election of Donald Trump. He is racist and unqualified as shit, but his fascist, homophobic, racist views, as well as him being unqualified for the position he was elected to, are some of the very reasons we have some of these beautiful young comrades in our presence today.

Now, more than ever, is the time to strike down the system that oppresses us. Our forces are expanding. And we will continue to work as hard as we can to continue to expand. Imagine if people, in the tens of millions, filled the streets, powerfully declaring that this regime is illegitimate and demanding that it not be allowed to rule!

The whole political landscape would be dramatically transformed. Every faction within the established power structure would be forced to respond — and all this could well lead to a situation in which this fascist regime is actually prevented from ruling.

With all this being said, the revolution is coming! Everyone against smashing the capitalist system will be skipped when our revolution train goes express.