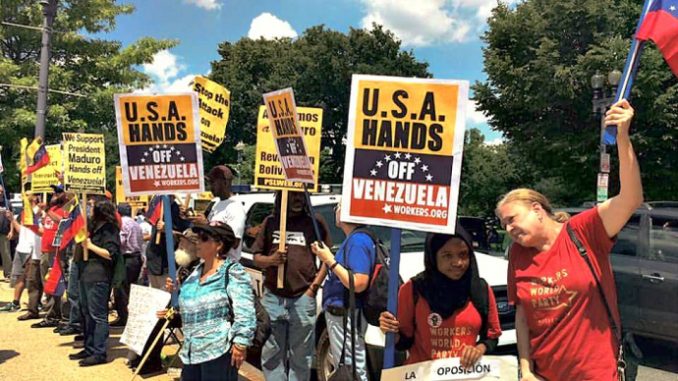 Facing off against close to 100 angry pro-U.S. protesters who had blocked the entrances of the Organization of American States headquarters in Washington, D.C., supporters of Venezuelan President Nicolás Maduro and the Bolivarian revolution held their ground, chanting “USA, hands off Venezuela!” and “Violence in Venezuela — Made in the USA!” on May 31.

The pro-Bolivarian protest was called in response to a meeting of the foreign ministers of the Organization of American States, during which OAS Secretary General Luis Almagro planned to promote sanctions against Venezuela. The U.S. ruling elite, the Pentagon and the U.S. government have used this tactic against countless countries in order to undermine and destroy people’s gains.

The protest also came 10 days after Orlando José Figueras, an Afro-Venezuelan, was set on fire on May 21 for allegedly being in favor of the revolution. The racist hate crime has horrified people around the world.

The counterrevolutionary forces outside the OAS justified the attack, saying that Figueras deserved to be burned to death because he was stealing. He has since died of his extensive injuries.

Supporters of the Venezuelan revolution carried pictures of the attack and pointed out the class differences between Figueras and those gathered against Maduro. Almost every pro-U.S. supporter was white and wore designer clothes.

Steven Ceci of the People’s Power Assembly pointed out that the majority of that crowd had arrived in fancy coach buses. He added, “You can see the class differences also by what they were yelling at us, things like ‘You dirty poor people’ and calling us homeless.”

Basma Gregg, an 18-year-old African-American Muslim woman and Workers World Party spokesperson, stood on the front lines despite taunts by counterrevolutionary protesters. She angrily expressed that “if the United States and OAS get their way, the people of Venezuela will suffer.”

She exclaimed that young people, particularly Black and Brown youth, were dying in the streets of the U.S. at the hands of racist police, and that this was what these pro-U.S. supporters were trying to bring to Venezuela: a system that despises the poor and working-class people. (tinyurl.com/yddmh7z5)

Gregg added later in a public post: “I broke down in tears … because of the ignorance of the upper-class Venezuelans that were protesting against us. When the Venezuelan economy goes completely down the drain because of U.S. intervention, those same upper-class, white-privileged Venezuelans will be safe and sound in this country, while their families suffer and are ripped to shreds by this government that they think is ‘oh-so-great.’ Do me a favor, and ask Syria and Puerto Rico how they feel about U.S. intervention.”

She and David Card, another young Workers World activist, pointed out that the opposition are terrorists who are attacking the gains that Venezuelan people have made through the Bolivarian revolution, including in health care and education, and increases in the minimum wage.

Workers World Party representative Sharon Black added: “We should never forget that Venezuela is the fourth-largest oil-producing country. It is imperative that the poor and working class around the world unite to say ‘No’ to intervention in Venezuela and to defend the Bolivarian revolution. This is our battle, too.”

She affirmed that Workers World Party and others will be continuing our protests in support of the Venezuelan people and the Bolivarian revolution. A protest is scheduled in Baltimore on June 8. See iacenter.org/4832/venezuela/.

The May 31 pro-Bolivarian revolution protests were called by a large cross section of groups, including the Alberto Lovera Bolivarian Circle of New York, Workers World Party, Baltimore Venezuela Support, the FMLN, Trabajador Unidos de Washington D.C., the Answer Coalition, CISPES — the Committee in Solidarity with the People of El Salvador, the Latin American and Caribbean Action Network, Brazilian Expats for Democracy, the Cuba and Venezuela Solidarity Committee, the Alliance for Global Justice, the People’s Power Assembly and Pan-African Community Action.