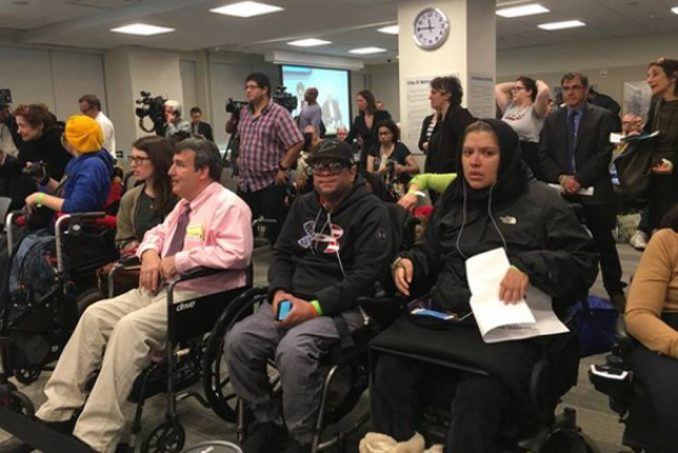 The Metropolitan Transit Authority has never produced an official map of the New York City subway system that only shows stations with accessibility for people with disabilities. That is because it would be embarrassing. More than 75 percent of subway stations would have to be removed — revealing the lowest rate of accessibility of any city in the United States. While the MTA is considered a “public-benefit corporation,” it is clear who is not considered part of the  public: people with disabilities.

Actions at the May 24 MTA board meeting only made this more obvious.

Early that morning, around 60 people with disabilities gathered at the New York City Transit Office to speak during the public comments session of the monthly MTA board meeting. This was no small accomplishment, as it is considerably more difficult for riders with disabilities to get around the city compared to nondisabled riders. From lack of service and chronic delays to packed buses and outright abandonment by the Access-a-Ride system, riders with disabilities go through hell to get where they are going.

But regardless of these riders’ commitment to raising their concerns and advocating for their rights, the MTA had no interest in hearing the grievances of those who made it to the MTA office that morning. After a few speakers were allowed to talk about their issues with the transit system and Access-a-Ride program, the MTA ended the public comments session early. The dozens of riders who hadn’t spoken yet were told they could present at the end.

This decision by the MTA exemplified a stunning ignorance of the struggle that riders with disabilities have in the city. Many of them could not afford to wait until the end because they would miss their rides home, or they had places to be and needed extra time to get there given the lack of reliable service. The anger at the MTA for leaving the room to conduct its meeting in private was so great that riders with disabilities left the meeting in angry protest.

What we need is a transit authority of the people. But what we have right now is a transit authority for the rich. It’s not like lack of service is due to a shortage of resources. If it were, we would ask the MTA how it could spend billions of dollars expanding the 7 line into Hudson Yards in mid-Manhattan. But, of course, we don’t have to ask them how. We know where their priorities are: working for the convenience of ruling-class elites who work and live in places like Hudson Yards, instead of serving people with disabilities across the five boroughs.