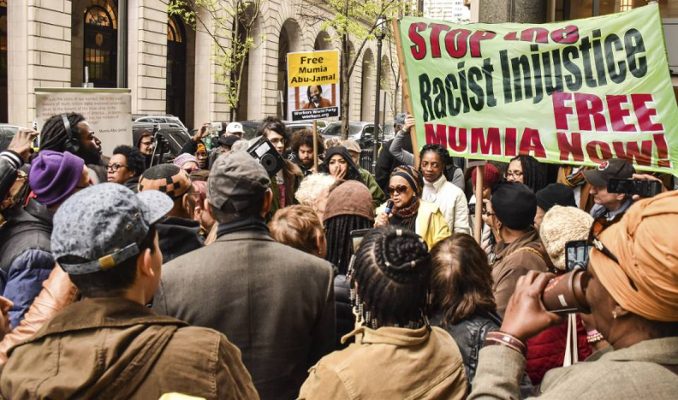 On April 24, protesters gathered outside of a state court in Philadelphia to demand Mumia Abu-Jamal’s freedom.

In a breakthrough in the struggle to free Mumia Abu-Jamal, an appeal to overturn his 35-year-old wrongful conviction in the death of a Philadelphia police officer was brought before Judge Leon Tucker on April 24.  Tucker is a Common Pleas judge in the city.

Abu-Jamal’s attorneys, Judith Ritter and Christina Swarns of the NAACP Legal Defense Fund, contend that Mumia was denied the right to due process, as protected by the U.S.Constitution, because Castille refused as a Pennsylvania Supreme Court Justice to step down from hearing state appeals cases he was involved in at a lower level.

The challenge to Castille is based on a 2016 U.S. Supreme Court decision, Williams v. Pennsylvania. SCOTUS found that the constitutional right to due process is violated when a judge presides over a case in which they had prior significant or personal involvement as a prosecutor. In addition to Abu-Jamal’s appeal based on this ruling, 17 other cases involving Castille were heard by Tucker; all were ruled in favor of the petitioners.

Tucker’s decision in favor of Abu-Jamal is important as it undermines legal roadblocks that deny or limit the right of people to appeal their convictions. One such limit was Teague v. Lane, a 1989 U.S. Supreme Court ruling made during a climate of neoconservatism.

In Teague, SCOTUS ruled that new constitutional rules of criminal procedure would not apply in cases where petitioners had exhausted their appeals process before the new rule was announced.

One exception allowed in Teague v. Lane was if “the new rule was a watershed rule of criminal procedure.” This appears to be the case with the SCOTUS 2016 ruling in Williams v. Pennsylvania.

In an April 24 hearing, Pennsylvania District Attorney Ronald Eisenberg argued against Mumia, but acknowledged due process denial might be relevant. His objection was that if the court ruled for Abu-Jamal, this might open a floodgate of appeals, overburdening his office and the courts.

Unsaid was that Mumia’s appeal would also create a firestorm for prosecutors who have gone on to become judges.

The tainted and widespread link among the courts, local district attorneys and the cops is observable in the Philadelphia District Attorney’s Office, under increasing scrutiny for its history of racism, corruption and collusion with the Fraternal Order of Police. Castille’s election to the state’s Supreme Court was heavily backed and financed by the FOP.

During the 1997 Philadelphia District Attorney election, news surfaced that Jack McMahon, a prosecutor running for that office, had trained fellow prosecutors to ignore a U.S. Supreme Court ban on using race to make jury selections. In a 60-minute videotape, McMahon instructed prosecutors: “Blacks from low-income areas are less likely to convict … [Y]ou don’t want these people on your jury.” McMahon was in the District Attorney’s Office in the 1980s when Abu-Jamal’s case was being prosecuted.

The overturning of Mumia Abu-Jamal’s death penalty conviction in 2011 was due in large part to continued international support and mass demonstrations, organized over many years. Recently, supporters, working with Abu-Jamal’s attorneys, won a ruling that the Pennsylvania Department of Corrections must provide Mumia with anti-viral drugs needed to cure hepatitis C that was dangerously compromising his health.

That victory for Mumia may be responsible for a recent decision by Pennsylvania Gov. Tom Wolf that prisoners who are state Medicaid recipients with at least stage F1 liver cirrhosis be given anti-viral drugs.

Building on these victories, Abu-Jamal supporters are calling for people to call the District Attorney’s Office to demand compliance with Tucker’s orders in favor of Mumia.

A press conference and protests are called for May 30, starting at the District Attorney’s Office in Philadelphia at 2 p.m. EDT. For more information, see Mobilization4Mumia on Facebook or contact [email protected]