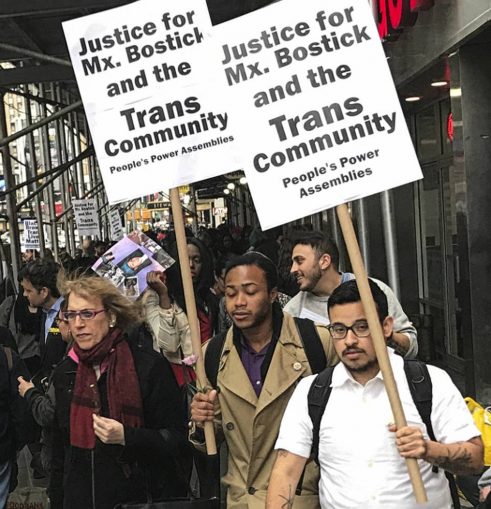 A vigil for Mx. Bostick, a Black transgender person, was held by the LGBTQ community on May 12. It was organized by trans people of color from the Translatina Network, the Audre Lorde Project, the Anti-Violence Project and other organizations.

Many transgender and cisgender Workers World Party and People’s Power Assembly members attended the vigil. Also in attendance were many members of the Transgenerational Theater Project.

On April 25, at 10 p.m., Bostick was walking past a hamburger joint at 29th Street and 7th Avenue, two blocks from the Pennsylvania Station/Madison Square Garden complex, when Bostick was attacked. Bostick sustained severe head injuries and died 10 days later, on May 4. Only then were the community and the media notified.

Bostick was the tenth trans person known to have been killed so far this year in the U.S. Eight of the ten were people of color.

What was demonstrated by the more than 150 people in attendance is that the attacks on the trans and gender nonconforming community will be beaten back on our road to victory.