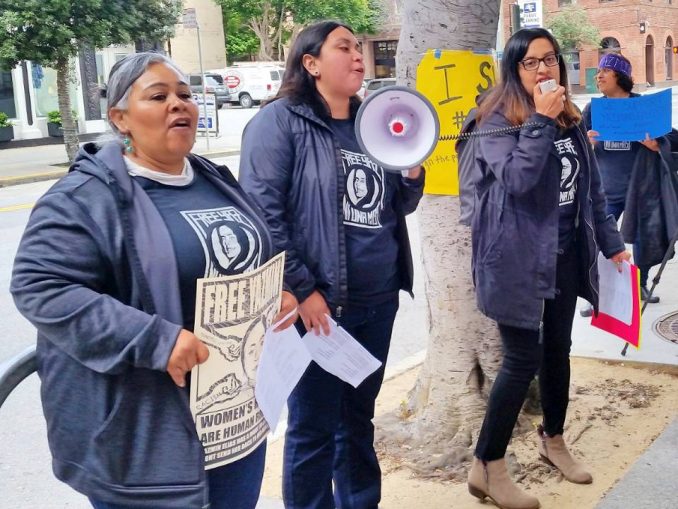 Supporters of Yazmin Elias call for her release in San Francisco on May 11.

Bulletin: Yazmin Elias was released from jail on May 15.

After a “successful” bail hearing at the Immigration and Customs Enforcement Detention Center in San Francisco, family and community members were anxiously awaiting the release of domestic violence survivor Yazmín Elias outside the West County Detention Center in Richmond, Calif., on May 11.

Instead, according to a May 12 press release issued by her supporters, they learned that “local entanglement with ICE [Immigration and Customs Enforcement] had led to a bizarre ‘catch-22’ which unfairly blocked Yazmín’s release.

“Specifically, during the 15 months that ICE has detained Ms. Elias in Richmond, she has, of course, been physically unable to attend local court hearings in Sonoma [a California city some 40 miles from Richmond]. Yet, local warrants were issued for Yazmín’s arrest, despite the fact she was locked up in ICE custody.”

Elias is now being held in the Sonoma County Jail and is to be seen by a judge on May 16. Her public defender, Luis Reyes Savalza, expects her to be released at that time.

“I was already packed up and ready to see my children, and having to deal with this, I’m just so frustrated because they keep playing with my life,” Elias said after receiving the news.

A survivor of domestic violence for nearly two decades and the mother of three children who are U.S. citizens, Elias migrated to Santa Rosa when she was four years old. On May 13, she was finally granted a $25,000 bond by Immigration Judge Scott Simpson; an anonymous donor agreed to post it.

“Community groups also continue to express opposition to the deportation policies of sheriffs in both Sonoma, where Yazmín was turned over to ICE, and Contra Costa [County, Calif.], which maintains a lucrative contract to detain people for ICE. Both sheriffs met with anti-immigrant Attorney General Jeff Sessions prior to his confirmation [as U.S. Attorney General], causing significant controversy.”

The California Sheriff’s Association actually wrote a letter in support of Sessions’ nomination. It was signed by Alameda County Sheriff Gregory Ahern, who has also faced numerous community protests for his cooperation with ICE.