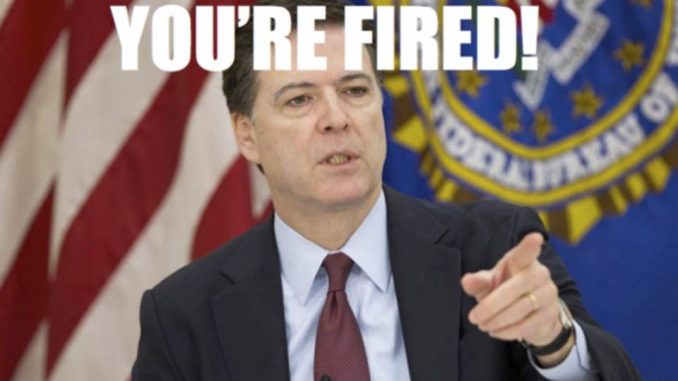 The firing of FBI head James Comey by President Donald Trump is a struggle within the U.S. ruling class. It is taking place at the highest levels of the capitalist state. There are no progressive sides in this struggle.

The workers, the oppressed and the radical movement must not get drawn into it. The role of the movement and of the working class is to mount an independent struggle against the attacks coming down on the masses on all fronts — labor, immigrants, women, the environment, Muslims, escalating racist police terror, new draconian drug law enforcement, etc.

These threats can only be thwarted by the fullest mass mobilization and militant resistance.

There is justifiable hatred of the racist, reactionary, militarist, authoritarian, bigot Trump. And Trump is the target of an FBI investigation. This can cause confusion because Trump is so hated that some people might be driven to the “lesser evil” of siding with the racist, repressive, anti-labor, anti-communist, witch-hunting FBI — the U.S. secret police — because of its investigation of Trump.

Behind the anti-Russia campaign

A further cause for confusion is that Trump and his administration are being investigated for collusion with the Russians. The U.S. ruling class has been pushing back against Trump since the 2016 election campaign when he made open and repeated appeals for a rapprochement with Russia.

The campaign against Trump’s orientation for rapprochement with Russia began as a struggle over foreign policy. It still is. But there is now an added dimension. The anti-Trump forces in the ruling class are now using the issue of alleged collusion with Russia as a political wedge to weaken and possibly get rid of him.

The anti-Russia campaign has been fueled by the Hillary Clinton camp and the Democratic Party leadership. They want to blame Comey and Russia for their electoral loss. Instead of calling for an investigation into racist voter suppression or admitting their bankrupt political campaign was based on the line that “things are great,” the Democrats prefer to blame Comey and the Russians. The anti-Russia campaign has also been fueled by the Pentagon wing of the Republican Party, led by John McCain and Lindsey Graham.

The anti-Russia campaign flows not just from Trump’s foreign policy orientation. On the contrary, this campaign would exist regardless of Trump. It flows from the expansionist policy of U.S. imperialism.

The bosses and the Pentagon are opposed to the Putin government because it has nuclear weapons, a large army, and is seen as a powerful rival. Part of imperialist expansionism has been the campaign of “regime change” in Syria directed against the independent government of Bashar al-Assad. Russia has enabled Syria to ward off imperialist aggression.

Also part of Washington’s expansionism was the sponsorship of a fascist coup in Ukraine. The former president of Ukraine refused to join the European Union and steer Ukraine toward Western imperialism. Washington organized his overthrow by a fascist invasion of the Ukrainian parliament. In reply Moscow supported anti-fascist forces in Eastern Ukraine and supported a move by Crimea to return to Russia.

The anti-Russia campaign now serves as a convenient weapon against Trump because it allows the capitalist establishment to fight him on a reactionary basis. Never mind his anti-Mexican and anti-Muslim racism, his sexism, his war on the environment, his promotion of the racist police, his attacks on job safety and labor standards, etc. The bosses would much prefer to make Russia the issue.

The FBI: from Watergate to Trump

The establishment is using the FBI as their weapon to sharpen their attack on Trump. This is nothing new. W. Mark Felt, known as “Deep Throat,” who fed all the information to Woodward and Bernstein at the Washington Post in order to bring Richard Nixon down during the Watergate investigation, became deputy director of the FBI after the death of J. Edgar Hoover.

The spy agency had then, and has now, the means of eavesdropping, surveilling, infiltrating, etc. — all the techniques they mainly use against mass organizations, unions, radicals, liberation organizations. It also has the means to spy on factions in the ruling class.

The establishment is using the FBI at the moment because the Republicans control the House, the Senate and the White House. Until Judge Neil Gorsuch was appointed to the Supreme Court, the rulers had the option of using the judiciary to challenge Trump, as in the stays of his illegal Muslim ban. That option is now more difficult to use, with Gorsuch on the Supreme Court. So the FBI is the agency of choice.

Timing of the Comey firing

At the time of his firing Comey was preparing to step up the investigation of the Trump campaign. Days before his firing, he met with Deputy Attorney General Rod Rosenstein to ask for more personnel and money to pursue the investigation. (latimes.com, May 14)

Trump decided to fire Comey at about the same time. He had a meeting with his Chief of Staff, Reince Priebus; his son-in-law, Jared Kushner; Vice President Pence; and White House Counsel Don McGahn. After the meeting Trump told Rosenstein to draw up a statement supporting the firing of Comey. The statement condemned Comey for, of all things, mishandling the revelation of the Clinton emails 10 days before the election! Rosenstein did not call for Comey’s firing. Trump then issued a one-page statement firing Comey for his alleged “mishandling” of the Clinton emails.

Of course, there is no one in Washington or anyplace else who could possibly believe Trump’s initial reasoning. It was patently obvious that Comey wanted to advance the investigation of Trump and his group. And Trump wanted to shut down the operation.

Trump also fired Assistant Attorney General Sally Yates after she told him that National Security Adviser Gen. Mike Flynn was dealing with the Russians. She also refused to support the Muslim ban. Trump maneuvered with Kevin Nunes, head of the House Intelligence Committee, who was in charge of leading the investigation into the Trump campaign. The investigation stalled and Nunes had to recuse himself.

In other words, Trump is clearly afraid of the investigation. The ruling class is not quite sure whether Trump’s fear is based on political relations with Russian officials or financial relations with the Russian oligarchy, or both. In either case, they do not trust him.

The ruling class is also suspicious because the only big bank that has lent money to Trump in recent years is Deutsche Bank, which was recently fined $630 million for laundering $10 billion worth of Russian money. (cnn.com, Jan. 31, 2017) The big New York Wall Street banks won’t lend to him because he has gone bankrupt six times, stiffing investors, contractors and workers. (Washington Post, Sept. 26, 2016; wsj.com, March 20, 2016)

Obama tried to stabilize the system

When Barack Obama was elected president over John McCain in 2008, he had major support in the ruling class because he was known as a moderate who could reach across the aisle and work out compromises. He was solidly pro-imperialist and pro-capitalist, but compromise was his strong point.

At the end of the Bush administration, U.S. capitalism was suffering from multiple crises that were threatening the stability of the system. Tens of millions of people were without health care and had no prospect of getting any. Two wars raged, in Iraq and Afghanistan. There were 12 million undocumented workers who needed a way to stabilize their situation. Big business was fiercely blocking any attempt to reduce carbon emissions or deal with the alarming rate of environmental degradation. And as Obama took office, the worst economic crisis in 70 years broke out.

During his tenure Obama tried to work on these issues while maintaining and protecting the capitalist system and the profits of the bosses. He got the Affordable Healthcare Act passed, which kept the insurance companies enriched but managed to cover an additional 20 million people. He dragged the bosses kicking and screaming into the global environment talks and finally got the Paris Accord on CO2 reduction. He pulled most of the troops out of Afghanistan and withdrew from Iraq. While Obama severely escalated drone attacks, he imposed strict White House control over military operations.

While Obama deported hundreds of thousands of immigrants early in his administration, and got called the ”deporter in chief,” he eventually got the Dream Act and other limited protections passed. He issued executive guidelines to Immigration, Customs and Enforcement to deport only those who committed “serious crimes” and said those whose only offense was to cross the border could remain. This was done by executive guidelines.

Finally, he presided over the bailout of Wall Street and promoted the passage of the Dodd-Frank bill, which placed restrictions on the Wall Street financiers and set up some protections for investors.

Fear of Trump destabilizing the system

The bosses and the bankers are licking their chops over the prospect of tax cuts, regulatory cuts on safety and environmental rules, tariff protection and other profit-growing measures under the Trump administration.

But the broad capitalist establishment — the corporate media, the think tanks, the academic institutions and the majority of the bourgeois intelligentsia — can see beyond the next profit-reporting quarter. They are fearful that Trump is determined to undo all the carefully worked out stabilizing arrangements at home and abroad that U.S. imperialism has constructed over the decades.

They also worry about his absolute ignorance of imperialist statecraft and his lack of interest in learning. Trump started his presidency by questioning the “one China policy,” which is the bedrock of U.S.-China relations. He took a call from the leader of Taiwan, but was forced to take it back.

In the midst of the Korean crisis, when U.S. imperialism needed the government in Seoul, Trump told south Korea that it had to pay a billion dollars for the installation of a highly unpopular U.S. anti-missile system and that he was going to tear up the U.S.-south Korean trade pact. National Security Adviser Gen. McMaster had to call the south Koreans and tell them that the U.S. would pay.

Trump refused to shake hands with German Chancellor Angela Merkel, the principal anchor of imperialism in Europe. These are only some of his political gaffs.

Trump’s health care bill, which threatens to strip 24 million people of their health coverage, is a disaster which has sparked fear and outrage among millions. His racist Attorney General, Jeff Sessions, has reversed the Obama-Holder policy of sharply restricting the use of the harshest mandatory sentences. Trump has overturned safe water executive orders. ICE has ruled that everyone in the country who crossed the border is now subject to deportation. Trump plans to undermine, if not overturn, the Dodd-Frank bill. Trump has lifted all restrictions on the military and handed over operational control to the commanders; 3,000 more troops are now headed to Afghanistan.

In short, the Trump administration is moving rapidly to undermine the domestic stability and international imperialist order carefully worked out over decades. He is creating consternation in the upper echelons of the capitalist establishment.

That is what was fueling Comey’s investigation. And Trump is trying to shut it down.