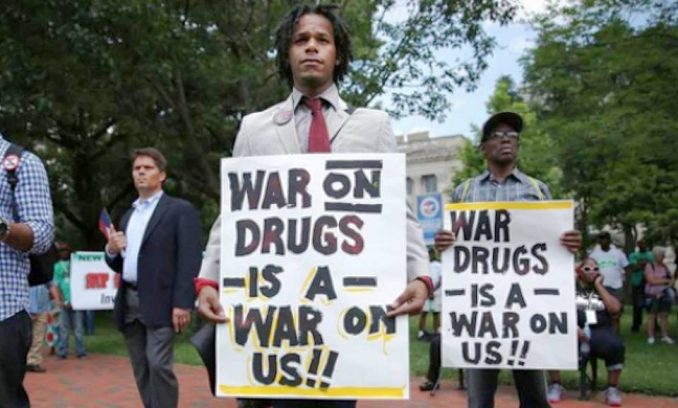 U.S. Attorney General Jeff Sessions announced on May 12 that the U.S. Department of “In-Justice” plans to overturn a 2013 policy established by President Barack Obama’s former U.S. Attorney General, Eric Holder, that instituted minimum prison sentencing for those convicted of drug trafficking, including marijuana.

Sessions, who is openly pro-cop and a die-hard white segregationist from Alabama, is giving local prosecutors around the U.S. the green light to once again unleash the harshest criminal sentences against those charged and convicted as drug dealers and users, especially if they are Black, Brown and working-class youth, for even insignificant amounts of drugs.

In essence, Sessions and his cohorts in the Justice Department are intensifying the so-called “war on drugs” that began in the 1980s under President Reagan, followed in the 1990s by the Clinton administration and the George W. Bush administration in the 2000s. Clinton was the main orchestrator of the preemptive “three strikes, you’re out” policy passed in 1994. Under that policy, if you were convicted of three felonies you were automatically sent to prison for life, with no hope of parole.

Due to the overcrowding of prisons and outcry over the racial disparity in drug sentences, President Obama released tens of thousands from federal prisons, many of whom were convicted of nonviolent drug possession, before he left office.

The U.S. still has the highest prison rate in the world, with 25 percent of the world’s prison population, at a cost of $80 billion annually. The rapid rate of mass incarceration has also led to the growth of private prisons for profit, funded by Wall Street investors like CoreCivic (formerly the Corrections Corporation of America).

According to the Washington Post, the U.S. prison and jail population more than quadrupled from 500,000 in 1980 to 2.2 million in 2015. U.S. prisons are filled disproportionately with Black men saddled with lengthy prison sentences — 10 or 20 years and sometimes life without parole for a first drug offense. (May 12)

The economic basis for Sessions intensifying these draconian drug laws is rooted in the current global economic crisis, which began in 2007 and was given Marxist analysis by Fred Goldstein in his 2012 book, “Capitalism at a Dead End.”

The first three paragraphs in Goldstein’s introduction sum up the current crisis this way: “Capitalism, the system of production for profit, has reached a dead end. The plague of mass unemployment, underemployment, low wages, destruction of benefits, social service cutbacks, and mounting poverty are overcoming the system and bringing unrelieved disaster to the multinational working class and the oppressed peoples of the world. In addition to the threat to the working class, the life-sustaining character of the environment of the planet is in dire danger.

“An entire generation of workers is facing a dismal future. For a growing majority, capitalism has in store only unemployment, marginal work and unskilled, low-paid jobs as the system incorporates more and more skills into software and machinery. Technology and the world-wide wage competition orchestrated by the employers continue to drive wages down.

“Among the most poisonous political and social consequences of the crisis are the intensification of racism, the growth of the prison-industrial complex, the rise in the persecution of immigrants and undocumented workers, and the war on women and lesbian, gay, bi and trans people. The ruling class seeks all means to sow division among the masses in order to divert attention from the failure of the economic system and the growth of obscene inequality.”

The increase in the murders of Black and Latinx youth by the police, along with other arms of the repressive state, including legislatures that pass biased, anti-worker laws, the Justice Department, the FBI, the courts, prisons and more, are constant reminders that a tiny clique of billionaire rulers — or the 1% — are fearful of spontaneous rebellions and shutdowns by the unemployed and underemployed masses, inside and outside the prison walls. The multinational working class is a real threat to the stability of the capitalist system.

Sessions has already made it clear that he wants to give the cops carte blanche — protected by biased laws — to carry out their savagery on youth with impunity, including those police departments that were singled out during the Obama administration as being “excessive” in their policing.

Disproportionate numbers of youth of color, along with growing numbers of once privileged youth, are becoming more and more expendable under a capitalist system that cannot provide a future with jobs at a living wage and full benefits.

Sessions and the current U.S. administration have not only declared open season on the oppressed masses, especially marginalized youth, but also on the progressive movement that has become more radicalized following the Nov. 9 election of Donald Trump. Many youth who were indiscriminately arrested on Jan. 20 in Washington, D.C., while protesting the Trump inauguration, are facing 75 years on excessively harsh felony charges. These charges are meant to have a chilling impact on the movement and on resistance.

The best way to counter this latest attack by Sessions and his ilk is to build a an independent, united movement of revolutionaries and progressives to say, “Stop the attacks on oppressed peoples and our movement.”

The writer was the 2016 Workers World Party presidential candidate.