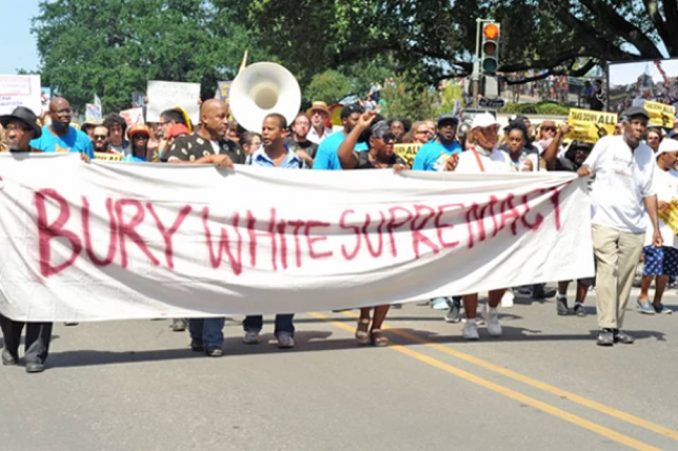 Some 1,200 people came out on May 7 for a loud and proud “second line” celebration of the demand to remove all symbols of white supremacy in New Orleans. In New Orleans parades, the second line of dancers or marchers come in behind the official first line.

For six decades anti-racist, civil rights activists in New Orleans have been demanding removal of Confederate monuments in New Orleans. Take ‘Em Down NOLA renewed this fight leading to a City Council resolution in 2015. The fight waged on, however; finally, the city took down one in the middle of the night, claiming it was unsafe to do so in daylight.

The march was led by veterans of this struggle, who walked the entire route. They carried banners calling for “Power to the people” and “Bury white supremacy,” along with giant enlargements of Rev. Avery Alexander and of Capetown, South Africa, students toppling statues of 19th-century British imperialist Cecil Rhodes.

This took place May 7 despite violent threats from fascist Nazis and KKK vermin, claiming they were coming to New Orleans to do battle to keep the racist monuments, and despite the city asking Take ‘Em Down NOLA to cancel its demonstration.

Resolute and organized, the “second line,” with chanting and a brass band, marched from Congo Square through the French Quarter to the Confederate Gen. Robert E. Lee monument. All along the route both Black and white residents and tourists cheered the march.

Take ‘Em Down NOLA has said the city has falsely used threats of violence to justify middle-of-the-night removal and no ceremony. The city’s statement shows that New Orleans’ white capitalist establishment wants the masses excluded so no new civil rights struggle arises.

Wesley Lynch III, a 25-year-old unemployed African American, told the May 6 New York Times that the statues are “living symbols of a social order that, from his experience, wanted people like him to rise only so far.

“They’re putting that image right in our face and saying, ‘Blacks at the bottom, whites at the top,’ That’s what they’re saying.”

After the first removal, racists and fascists were allowed into the city. Despite an ordinance that bans firearms from protests, the cops let them carry loaded machine guns and pistols for weeks as they camped out around monuments. This created a tense situation in the majority Black city, and it created several spontaneous confrontations.

In this situation Take ‘Em Down NOLA called for an open celebration in the streets. The group decided to walk a traditional New Orleans second line, this time to “Bury white supremacy.” It was called for May 7, the last day of Jazz Fest, which is an annual giant tourist attraction, the darling of New Orleans’ tourism capitalists.

The racists responded by calling for reinforcements. Calling the confrontation “the second battle of New Orleans,” they drew in an assortment of around 150 violent KKK and Nazis. The city blasted the threat of violence on local media to try to discourage people from coming to the celebration.

They put an equal sign between Take ‘Em Down and the racists.  The media portrayed the conflict as those for or against monuments, rather than as between civil rights activists and Klan scum.

None of this stopped over 1,200 New Orleanians from taking to the streets to celebrate the people’s victory. TEDNOLA leaders encouraged the crowd to not be intimidated, and led them to the Lee statue where the racists were posted all morning.

Intimidated by the numbers and confidence of the crowd, the racists avoided attacking the parade and instead fought among themselves. TEDNOLA claimed its territory, moving barricades up to the monument to address the crowd.

Take ‘Em Down NOLA is planning a national conference.

For more information and to support, see takeemdownnola.org.