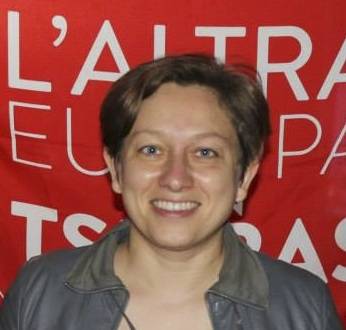 Eleanora Forenza, member of the Communist Refoundation Party in Italy.

Eleonora Forenza is a member of the European Parliament and the Communist Refoundation Party of Italy. She is accompanying the 3rd Antifascist Caravan to Donbass, organized by the revolutionary musical group Banda Bassotti. The Europe-wide caravan promotes solidarity with the people of the Donetsk and Lugansk People’s Republics, which broke away from Ukraine after a U.S.-backed, far-right coup in 2014. Since then Ukraine’s war against the republics has continued. Workers World spoke to Forenza before she departed.

Workers World: Tell me about your background. How did you become involved in leftist politics?

Eleonara Forenza: I think I became a feminist as a very young girl. I was denied the right to play in a soccer tournament in my neighborhood in my hometown, Bari, because only boys were allowed. So I started studying feminism. Then I got involved in politics during high school, getting close to leftist ideas and communism. I’ve been a militant of the Communist Refoundation Party since 1995, when I was 18, and I still am today.

WW: As a member of the European Parliament, what initiatives have you taken to represent workers and anti-fascist forces?

EF: My main commitment has been to work in the international trade commission of the European Parliament. Along with my colleagues of the United European Left group, I’m fighting against the free trade treaties that the European Union is negotiating with the U.S. and Canada (T-TIP and CETA). It is a key battle against the extension of neoliberal policies that are eroding the rights of the workers and the welfare state throughout Europe.

I’m also deeply involved in the struggle to ensure gender equality in every kind of policy of the EU.

WW: Is it difficult to present an alternative view on the situation in Ukraine and Donbass to the European Parliament and the media?

EF: It certainly is. Most mainstream media are delivering a totally rigged story about what happened and what’s still happening in Ukraine. I hope that being the first European Parliament member to be in Donbass will help to break through this media blockade and start a discussion about the huge political problem that Ukraine is today, especially for the EU.

In Kiev, there’s patently fascist members of the government, and fascist militias are fighting on the ground. That is not acceptable. The extension of NATO toward the Russian border is certainly not helping out.

WW: What made you decide to participate in the caravan?

EF: I decided to join the caravan because what is happening in Donbass is too often forgotten. In my mind I still see images of the Odessa massacre [when neo-Nazis murdered more than 40 anti-fascists on May 2, 2014].  And above all because anti-fascism is a duty for every leftist militant. We’re experiencing war near the very heart of Europe.

WW: What will you investigate on your trip?

EF: We have a very busy schedule of meetings with leftist parties, unions and institutions of the independent republics of Donbass. We will ask about the political situation in Donbass today, how the population is facing the conflict and what people need most. Our caravan will also bring material aid for the people, especially for children.

WW: You were the European United Left’s candidate for the European Parliament presidency. How will you use your position to share truthful information about Donbass and build solidarity?

EF: I was a candidate for the presidency of the European Parliament in January 2017. I was supported by my group, European United Left/Nordic Green Left. Unfortunately, a member of the Popular Party, a conservative group, won the election. I will nevertheless continue my commitment to the Donbass cause in every possible way.