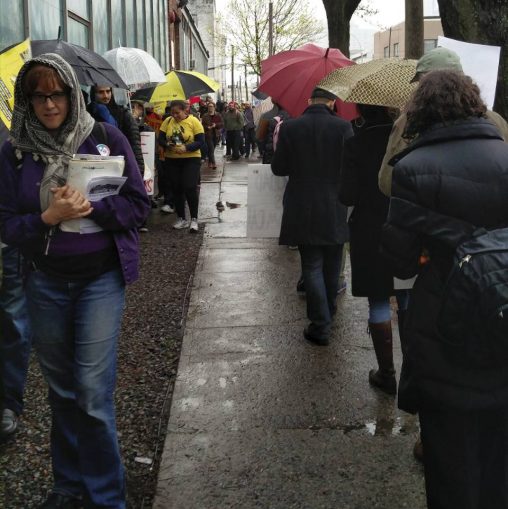 New York City – The racist, anti-worker bosses at Tom Cat Bakery finally carried out the wishes of the repressive state on April 21 and fired over 30 workers who failed to show papers following an I-9 audit by the Department of Homeland Security in March. This is the first time in 11 years that an employer in New York City has collaborated with U.S. Immigration and Customs Enforcement (ICE). This escalation in state violence, however, was met with resistance.

On the morning of April 21, four community members and activists chained themselves to the delivery trucks at Tom Cat Bakery, stalling production for over an hour. Nearly 200 activists then met up to picket the bakery and if necessary intervene in any ICE raids. Several of the workers under threat spoke at the protest and shared their stories.  Many of them had worked at the factory for a long time before the audit, upwards of 16 years, and have deep ties to the community.

The deportations, and now firings, of immigrants are generating massive political energy in the migrant communities, which may culminate in a May Day general strike, the likes of which haven’t been seen since 2006. The Tom Cat workers, shortly after the firings, confirmed that they will participate in this year’s May Day strike in New York City.