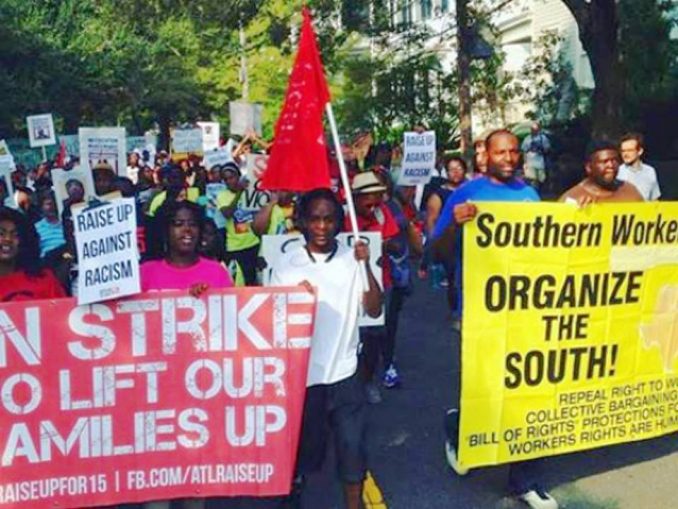 Where could you find dozens of dock workers, nurses, city and state workers, campus workers, fast food workers, sheet metal and manufacturing workers, some unionized, some not, engaged in serious discussion and education on how to build a fighting, Southern, social unionism movement? At the second Southern Workers School, held here April 22-23, that’s where!

A project of the Southern Workers Assembly, the school gathered together workers from Virginia, North and South Carolina, Tennessee, Georgia, Alabama, Mississippi and Florida. For two days they exchanged information about the challenges and successes of organizing in their workplaces.

Historical labor law background was provided as well as examples of building workers’ power in nontraditional ways. Small group discussions centered around developing strategies and tactics for various workplace scenarios common to many.

The goal, according to SWA leaders, is to create conscious rank-and-file leaders who are linked together in the Southern Workers Assembly and who strive to make significant changes in their locations and states.

A key point made numerous times in the sessions was “’workers’ power comes from exercising our rights.” The need for workers to be directly engaged in determining demands and acting to achieve them was the uniting theme of the school’s opening curriculum.

A complementary principle enumerated by participants was the inherent bond between struggles for human rights for all and workers’ rights. Of course, everyone was encouraged to participate fully in May Day events in their cities.

The next six sessions of the school will take place using technology like Skype and conference calls, to be concluded with a wrap-up meeting in Atlanta.

The Southern Workers School was hosted by Project South and held in the Hunger Coalition building in Atlanta.

For more information, go to www.southernworker.org.