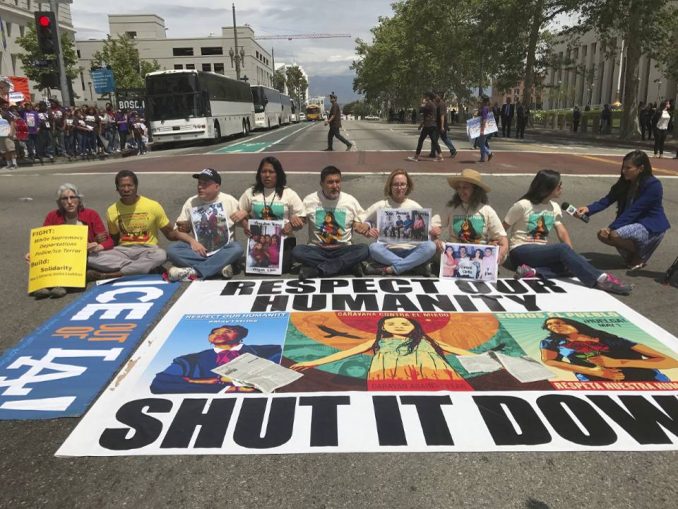 Eight people were arrested April 17 in front of the Los Angeles “Hall of Justice,” where the county sheriff’s office is located, protesting Sheriff Jim McDonnell’s anti-immigrant policies. Those arrested were part of a rally organized by the Caravan Against Fear, which held actions to highlight the attack against the immigrant communities by President Donald Trump and to support SB 54, legislation calling for a “sanctuary state” in California. That legislation prohibits state and local enforcement agencies from enforcing immigration laws and limits cooperation with federal immigration authorities.

In California, the caravan traveled north to south, starting in the state capital of Sacramento and ending in the border city of San Diego. One of its actions in Los Angeles was the downtown civil disobedience action to protest Sheriff McDonnell’s pledge to cooperate with U.S. Immigration and Customs Enforcement and his opposition to any sanctuary legislation.

The International Action Center in Los Angeles endorsed the caravan and participated in the civil disobedience. Maggie Vascassenno and John Parker of the IAC, who are also members of Workers World Party, were arrested, along with six members of NDLON and SEIU-USWW, for blocking the street in front of the sheriff’s office.

Said Vascassenno: “Trump is trying to destroy our solidarity. So his racist, fascist war agenda must be opposed. And on May 1 there will be millions out in the streets telling both Democrats and Republicans alike that we will fight Trump and any policies that push cutbacks, war and racism.”

Parker and Vascassenno are part of the May Day General Strike Coalition demanding an end to deportations, an end to police and ICE terror, and sanctuary for all. On May 1, gather with them at 10 a.m. at Olympic and Broadway. Then march to City Hall, where all May Day coalitions will unite at a final rally.