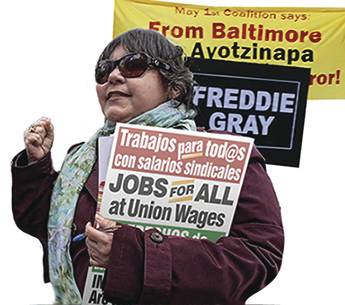 Ultra-racists and warmongers like Donald Trump, Jeff Sessions, John Kelly and their Immigration and Customs Enforcement agents are setting Washington’s immigration agenda on behalf of the capitalist system.

This is intensifying the modern war to criminalize migrants in the United States that began in 2006. But it is a war that will ultimately be won by the unity of all the working class, whether foreign- or U.S.-born.

This war against immigrants is not separate from the government-Pentagon drive to imperialist war in Syria or North Korea. In fact, U.S. intervention abroad is a major cause of forced migration.

Washington is taking a very dangerous, threatening posture against revolutionary Venezuela as well. It is similar to when President Barack Obama and Secretary of State Hillary Clinton orchestrated a coup in Honduras in 2009, which created further forced migration from that country.

The U.S. immigration issue is also critically linked to the refugee crisis in Europe. While the U.S. drops missiles in Syria on the pretext of caring for children, the Trump administration hypocritically refuses to admit Syrian refugees, including children, into this country.

Most Syrian refugees go to the countries of western Europe, which is also the destination of vast masses of migrants from other countries in the Middle East, North Africa and Eastern Europe. Conditions for these refugees in Europe are as bad as those for migrants on the U.S./Mexican border.

The war on migrants and the migrants’ plight, whether in the U.S. or Europe, is deeply connected to every struggle, whether it’s the fight against climate change or the cutbacks looming in Medicaid or the struggle for health care, union rights and education. It is connected to the Black Lives Matter movement as Black immigrants and/or Muslims are disproportionately targeted.

The Department of Homeland Security’s website states that it “has a vital mission: to secure the nation from the many threats we face.”

The current secretary of the DHS is John Kelly, a retired general who spent 45 years in the armed forces.

On April 18, Kelly spoke at George Washington University. An April 21 New York Times editorial summed up his remarks as fear mongering: “The tone he sets can only encourage abusive behavior among his officers … against immigrants, and also lead to the curtailment of civil liberties and privacy.”

It adds that his “apocalyptic talk turns the Islamophobia and immigrant scapegoating that turbocharged the Trump campaign into marching orders for federal law enforcement agents and bureaucrats.”

Kelly’s history is key to understanding his role today. He is a warmonger, one of those responsible for the criminal destruction and countless deaths in Iraq.
He is a former head of the U.S. Southern Command, which includes Guantánamo Bay in Cuba, illegally occupied by the Pentagon and used for the last 16 years as a torture prison for people kidnapped from other countries and held without rights or trial.

As head of the Southern Command, Kelly was also deeply involved with all U.S. military activities in South and Central America in the 1980s.

That was an important period in Central American history. Nicaraguans, Guatemalans, Salvadorans and Hondurans were fighting heroic, important revolutionary battles to free themselves from colonial and imperialist domination.

Had they been allowed to control their own destinies, we would not see the forced migration of today.

Now John Kelly is working nonstop to deport as many Central Americans as possible back to certain death and misery. And he continues Trump’s racist, dangerous Islamophobia that attempts to blame Muslims for every act of terror.

Kelly is also a strong proponent of keeping the Guantánamo Bay prison open at all costs. Human-rights investigators from the United Nations and other agencies proved that prisoners, especially Muslims, have been held there in violation of their human and civil rights.

In fact, the Center for Constitutional Rights, which has led the legal fight against Guantánamo and represented some of the detainees, stated that Kelly’s “aggressive oversight of the illegal military prison … disqualifies him” from leading DHS.

“Presiding over a population of detainees not charged or convicted of crimes, Kelly treated them with brutality,” CCR reported. “His response to the detainees’ peaceful hunger strike in 2013 was punitive force-feeding, solitary confinement, and rubber bullets. Furthermore, he sabotaged efforts by the Obama administration to resettle detainees.”

This is the person now sending ICE agents to the homes of workers who only want to put food on their families’ tables.

Money for people, not concentration camps!

During last year’s election campaign, Trump promised that immigration would be a cornerstone of his administration. He is carrying out that promise.

The Trump administration is assembling a vast deportation force whose policies are being carried out by ICE agents who have publicly expressed their hatred of immigrants.

The Washington Post reported on April 12 that it had obtained an internal DHS assessment memo which revealed that the department has secured 33,000 more detention beds to house immigrants. These detention sites evoke the heinous period of Japanese internment camps in the 1940s.

Detentions are only one part of the rapidly enforced immigration policies carried out by the Trump administration. DHS is working closer than ever with local police forces, which are being empowered to carry out ICE roles. It is fast-tracking ways to hire more ICE agents and may even end polygraph and physical fitness tests for them. This opens up the possibility of hiring more thug-like agents than ever before.

Deportations will increase under Trump. Immediately on taking office he signed executive orders that expanded the pool of undocumented and even documented migrants to be singled out as a priority for removal.

An April 16 New York Post report on Kelly said that “under the Trump administration’s tougher immigration rules, even a ‘single DUI’ can start the deportation ­process.”

This means that a migrant stopped on the road can be easily put into the system, detained and deported.

What was once a routine check-in for the undocumented has now become a day of terror. Before the Trump era, DHS officers had applied “prosecutorial discretion,” leading to more so-called convicted criminals being deported, while those without a criminal record just checked in every year.

That has changed. Now many walk into court for their annual check-in and do not walk out. So being undocumented is itself now being treated as a crime.

The immigrant rights movement points out that the rhetoric about “criminal” or “noncriminal” immigrants is a divisive wedge issue — and is rightly demanding the end of deportations of ALL immigrants, criminal record or not, and permanent residency for all undocumented workers. These workers and their families have certainly earned it.

Attorney General Jeff Sessions visited the U.S.-Mexican border at Nogales, Ariz., on April 11. The purpose of the trip was to announce policies to step up the government’s prosecution of undocumented workers, policies that affect documented migrants as well.

In Sessions’ written statement he called the policies a “move against filth like gangs and criminal aliens.”

When Sessions was appointed attorney general, it stunned anti-racists and civil rights leaders. “That means a man with white supremacist ties, a racist and homophobic legislative record, and a history of opposing voting rights is now the top law enforcement officer in the country,” wrote Think Progress on Feb. 8.

In 1986 Sessions was denied a judgeship after testimony on his support for the Ku Klux Klan. Democrats have noted that Sessions is more anti-immigrant than anyone else in Congress.

Sessions said on the border: “This is a new era. This is the Trump era. The lawlessness, the abdication of the duty to enforce our immigration laws, and the catch-and-release practices of old are over.”

A parent who brings children over the border can now be charged with “harboring,” sent to jail and deported. Nonviolent immigrants who enter the country illegally for a second time will be charged with a felony, not a misdemeanor as previously.

Sessions is calling for charging workers with “document fraud” and “aggravated identify theft.”

Stop racist deportations and Islamophobia!
Permanent residency for all migrants!

The Trump administration directives are a further call to war on migrants, meant to paint all immigrants as threats and criminals. The administration wants people to think Muslims are all terrorists.

These moves to appease far-right anti-immigrant elements are part of an overall racist campaign to push back the gains that workers of color have made through militant struggle. The goal is to divide and conquer the working class.

But the real terrorists are the white supremacists and warmongers now running Washington. A “Blue Lives Matter” ideology is pushing policy that means more war here at home and abroad.

This makes the May Day 2017 strike much more important — and the struggles for migrant and worker rights that will go on after May Day that much more ­decisive.

More than ever our movements in the streets — whether for immigrant rights, against police terror, to stop wars abroad and climate change, for women’s or LGBTQ rights — must become anti-capitalist as well as internationalist.

We must show not only in slogans but in our actions that there are no borders in the workers’ struggle, that we stand united with workers in every country, from every country. Our lives depend on it.