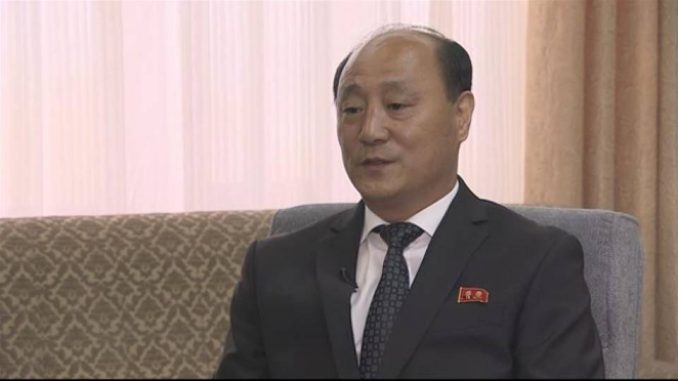 Here are the facts that the U.S. media ignore about Korea:

There are no foreign troops in the Democratic People’s Republic of Korea — north Korea. The last Soviet soldiers, who aided Kim Il Sung’s guerrilla army in defeating Japanese colonial rule, left in 1948. Chinese troops, who supported the DPRK after the U.S. invaded north Korea in 1950, left in 1953 after the armistice.

But U.S. troops have occupied south Korea since 1945; 28,500 are still there. There are 38 U.S. military installations in south Korea, plus one militarized golf course. (lifeinkorea.com) The golf course is the station for the first Terminal High-Altitude Area Defense (THAAD) battery in south Korea, a U.S. radar system opposed by the Korean people, in the north and south, as well as China.

Every year, the U.S. carries out massive war exercises in and around the Korean peninsula. This year’s Operation Key Resolve/Foal Eagle, which began in March and continued until April 24, has involved hundreds of thousands of troops from the U.S. and south Korea.

The south Korean news agency Yonhap reported on March 13: “The U.S. Navy SEAL Team Six will join the annual Foal Eagle and Key Resolve exercises between the two allies for the first time, along with the Army’s Rangers, Delta Force and Green Berets.” Yonhap quoted an unnamed military official as saying, “A bigger number of and more diverse U.S. special operation forces will take part in this year’s Foal Eagle and Key Resolve exercises to practice missions to infiltrate into the North, remove the North’s war command and demolition of its key military facilities.”

In truth, it is the imperialist U.S. that is the “foreign power” in Korea and has created an explosive situation for the whole region in its attempts to destroy the DPRK. Five million people died in the Korean War. Continued occupation and threats from the U.S. have forced the north Koreans to arm themselves, including with nuclear weapons, in order to survive.

But threats won’t work against the Koreans. As Sin Hong Chol, the DPRK’s deputy foreign minister, told Al-Jazeera, the U.S. administration should “look at the world with open eyes.”

“The time of dictating orders by brandishing U.S. military might has gone,” he said. “If those businessmen in power in the U.S. thought of intimidating us by any military or sanction threats — as the Obama administration used to do and failed — they will soon find out such threats are useless.” (April 23)

There’s only one way to defuse the tensions on the Korean peninsula. The U.S. must sign a peace treaty ending the 1950-53 war (it never has) and get its troops out so the Korean people can at last determine their own destiny.