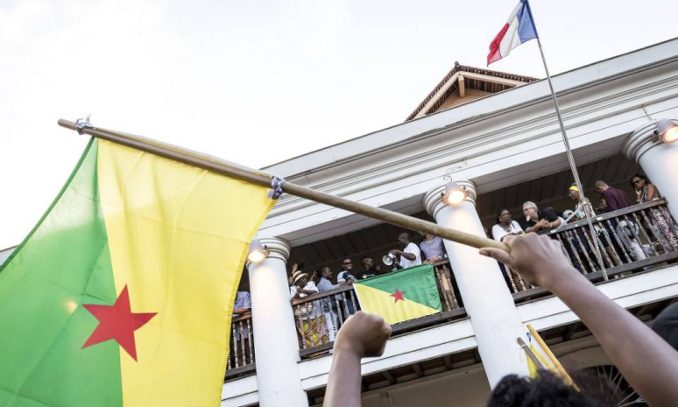 The French government signed an accord on April 21 with the collective that has been leading the general strike in French Guiana for over a month, handing the strikers a clear victory.

The next day, the French television channel TV3, started showing clips of  people taking down the roadblocks that denied access to the site where satellites are launched. According to José Blézè, a Guianese journalist, “All the markets of French Guiana have been reopened, to the great joy of the people living here.” (TV3)

While the government had previously agreed to a package of about 1 billion euros for schools, hospitals and aid to businesses before the end of April, the new accord among the government, local officials and the collective Pou Lagwiyann dékolé (PLGD — Let Guiana Take Off) authorizes another 2.2 billion euros in general categories like roads and bridges. It also lays out a detailed process for changing Guiana’s management.

Davy Rimane, a spokesperson for PLGD, noted, “We have succeeded in getting this protocol appearing in the Official Journal.  Now we can work with this document and go to court if we are not satisfied.”

The PLGD also won a pledge from the government that no retaliations would be taken against members of the collective for actions committed in the course of the strike.