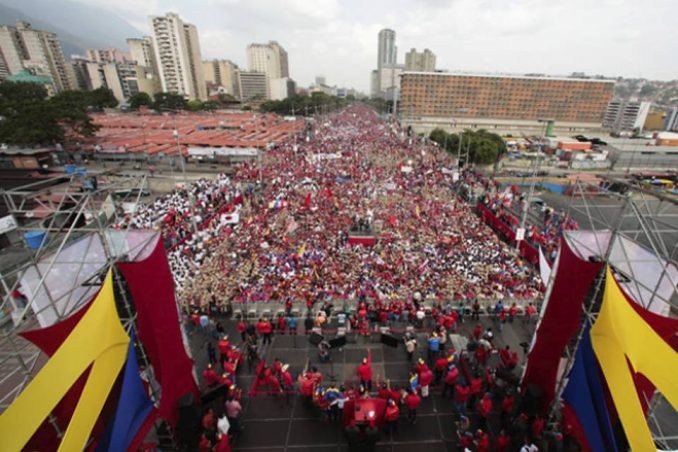 Masses pour out in support of Venezuelan government.

The Pentagon, the Trump administration and all enemies of the poor are working overtime to destabilize the revolutionary government of Venezuela. The rich elite in Washington and Venezuela are undermining and sabotaging all attempts to build a society in Venezuela that provides education, health care, housing and a decent living for all, especially the poorest.

News about Venezuela in the United States is completely distorted. Lies about who is responsible for food shortages or for the violence in the country are all fabricated and aimed to set the stage for intervention by Washington.

Workers in the United States must stand in solidarity with the Venezuelan people and their President Nicolás Maduro. We must say, “No to U.S. intervention!”

On April 19, hundreds of thousands of Venezuelans took to the streets of Caracas for the country’s Independence Day, the vast majority in support of President Maduro.

Thousands of rich, right-wing Venezuelans also marched and tried to create a dangerous situation in the country.

One protester told Venezuelanalysis on April 19, “I am here to support the Revolution … because I love my country, I’m a Chavista. … I support Chavez and Maduro, and I want that to be heard in the U.S., Europe and the rest of the world so they can’t say this is a show, that we don’t have numbers, that we’re paid to be here. No, this is real.”

that day, “Here we are at the largest anti-imperialist march in Venezuelan history; the U.S. empire has done much harm and we have right-wing opposition sectors that seek the ouster of the legitimately elected government, [but] here we are in the streets, ready to give everything including our lives to prevent U.S. boots from touching our soil.”

It is been mainly in the wealthy neighborhoods of Venezuela where resistance and sabotage of Maduro is centered. Here the anti-poor destroy public property, obstruct roads, carry out arson, theft and all forms of violence.

Pro-Maduro activists report that the cruel use of barbed wire strung from lampposts across streets to block the roads and even decapitate passing motorcycle drivers has returned. The government has been forced to respond with tear gas and water cannons.

The destabilization effort has led to dozens of deaths on both sides of the war, but those fighting to defend Chavismo are of course the war’s heroes.

Telesur reported that trade union leader Esmin Ramirez was killed on April 23 in the state of Bolivar after being kidnapped the previous day. He was found dead with several gunshots in the head. Ramirez was a member of the Movement 21 labor syndicate and also a participant in the PSUV political party.

In another example of how dangerous the current situation is in Venezuela, mayor of Caracas Jorge Rodriguez revealed that protesters “wanted to burn children.” (Telesur.net, April 22) He was referring to the anti-Chavistas attack on the Hugo Rafael Chavez Frias Maternal and Children’s Hospital on April 20. The facility had 54 children inside, but they were safely evacuated. The counterrevolutionaries burned garbage and threw rocks and sticks that severely damaged the hospital.

From the belly of the beast, the message must be loud and clear: Trump: Hands off Venezuela!