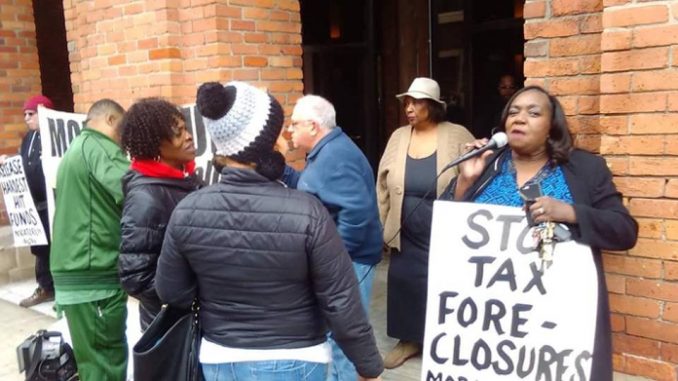 A demonstration at the Wayne County Treasurer’s office in Detroit on March 31 called for an immediate moratorium on tax foreclosures and water shutoffs.

According to Loveland Technologies, which surveys tax foreclosures, 43,624 homes were noticed for tax foreclosure this year; of this number, 35,601 of these homes are in Detroit, and 31,586 surveyed as occupied. (makeloveland.com) This is on top of the over 150,000 homes already subjected to tax foreclosures since 2002, as well as the approximately 100,000 mortgage foreclosures which have occurred in Detroit since 2006 as a result of the racist, predatory, subprime lending schemes perpetrated by the big banks.

The state of Michigan has received $761 million dollars in Helping Hardest Hit Funds from the federal government since 2010. These funds are a pittance of the $700 billion bank bailout.

The funds available to avoid these tax foreclosures are not being used or used properly. While the purpose of these funds is supposed to be to keep families in their homes, $381 million has been earmarked by MSHDA (the Michigan State Housing and Development Authority), the state administrator of the Helping Hardest Hit program, for blight removal (blight caused by the banks and corporations). Only $216 million is being used to avoid foreclosures by paying homeowners’ delinquent mortgage and property tax bills.

Over $200 million of blight funds remained unspent as of January, according to the most recent federal treasury report on the Hardest Hit program. This is because they are continually being frozen due to the corruption and fraud of the Detroit Land Bank and Blight Removal Task Force, as documented in federal, state and city audits. Despite this corruption, MSHDA is refusing to reallocate these funds to keep families in their homes as they were intended.

Tens of thousands of Detroiters also face water shutoffs, which are nothing but evictions in another form. These are in addition to the 70,000 water shutoffs that occurred between 2014 and October 2016. (Detroit News, Oct. 13)

The demonstration, on the last day for residents to make payments before their homes are slated to be auctioned off, was addressed by TV broadcaster and former City Councilwoman Joann Watson; mayoral candidate Coleman Young II; William Davis of the Detroit Active and Retired Employees Association; Abayomi Azikiwe and Jerry Goldberg of the Moratorium Now! Coalition; and Mariah Urueta, Michigan organizer at Food & Water Watch. Every speaker called for an immediate moratorium on foreclosures and water shutoffs, and use of the Hardest Hit Funds to keep families in their homes with running water, not to tear them down.

A lawsuit by the American Civil Liberties Union is also moving forward, challenging the inflated and illegal property tax assessments in the city of Detroit, as well as the failure to offer tax abatements to thousands of poor Detroiters who are entitled to them under the law.