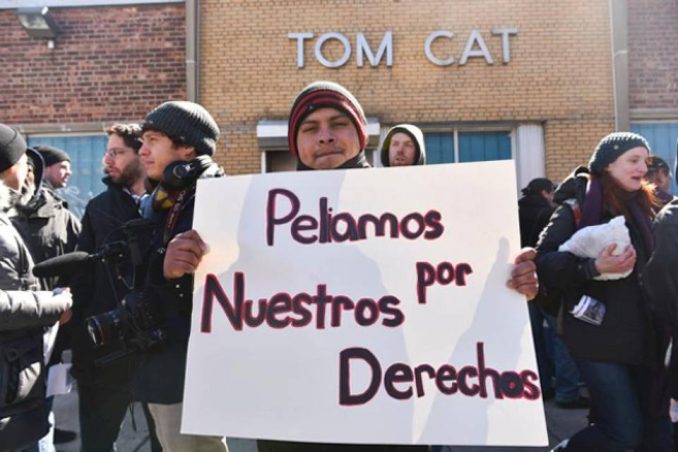 Thirty-one immigrant workers at Tom Cat Bakery, an industrial baked goods supplier in Long Island City, N.Y., received letters from the payroll department demanding they prove legal immigration status by March 15. “Unless you present us with valid identification,” the letter reads, “… you are considered by the Homeland Security Investigations to be unauthorized to work in the United States.” (villagevoice.com, March 22)

The workers, who are organized with the nonprofit advocacy group Brandworkers, immediately sprang into action with a rally March 22 calling for community support and demanding the company defend the workers from the DHS attack. According to Tom Cat worker Librada Antigua: “The Trump administration may want us to disappear, but we’re not leaving our children for anything. Our unity is our strength, and our commitment is to victory.” In response to the show of united resistance, the company has agreed to delay layoffs until April 21.

Henry Rivera, an 11-year Tom Cat worker who immigrated in 2005 from Honduras, encouraged workers to participate in May 1 general strike actions to fight back against the increasing anti-immigrant attacks, “We are organizing not just for Tom Cat workers, but for workers in New York and the whole nation to encourage them to fight for justice.” (licpost.com, March 29)

A protest called at City Hall for April 4, Equal Pay Day, is part of the fight for back pay by more than 1,500 women of color who hold administrative managerial jobs in New York City agencies. Signifying the wage gap, the date symbolizes how far into the year women must work to earn what men earned in the previous year.

When Communication Workers Local 1180 discovered two years ago that these women workers were being grossly underpaid — by upwards of $65,000 a year — CWA filed a complaint with the federal Equal Employment Opportunity Commission, which quickly found in their favor. When the city failed to respond to EEOC’s request to pay up, Local 1180 filed a notice of claim last December demanding retroactive pay amounting to $243 million. The union called the demonstration to spotlight that the city is still negligent. (cwa1180.org)

Yet again, Congress sides with bosses instead of working folks. In early March, Rep. Jody Hice introduced HR 1364, the Official Time Reform Act of 2017. It would cut the clock on that part of the workday that union shop stewards can spend on “official time.” That’s time spent at work representing the union, resolving members’ concerns and problems. It’s a request guaranteed under civil service law passed 40 years ago, and a method already exists for curtailing it — management and supervisors can deny the request.

Since this control exists, rendering HR 1364 redundant, what are its true intentions? Congress wants a chilling effect on workers who need representation, but also wants to ice those workers who want to serve as stewards. If enacted, this bill would take retirement time from stewards as a penalty. It’s literally asking a steward to choose between your future and your member’s. It’s muffling whistleblowers but also union calls to serve as stewards. Under capitalism, officials reckon only with capital’s forces and never the working people who shape labor and our unions. (afge.org, March 13)

Anti-worker President Trump signed a joint resolution March 27 to nullify the Fair Pay and Safe Workplaces rule issued by the Obama administration in 2014. Its purpose was to safeguard workers by making sure federal contracts do not go to companies that habitually violate labor laws by failing to pay overtime and minimum wages, deny lunch breaks or force employees to work off the clock. “By repealing these protections … contractors with even the worst track records [are] off the hook — a punch in the gut to workers, taxpayers, and law-abiding businesses,” said Christine Owens, executive director the National Employment Law Project.

A congressional report released in March assessing federal contractors’ compliance with labor laws found “significant” abuses. Dozens of worker deaths occurred at companies that took shortcuts with health and safety standards. More than 300,000 workers employed by federal contractors in the past decade have experienced wage theft. Nearly one-quarter of the U.S. workforce is employed by a federal contractor or subcontractor. (Rewire, March 28)