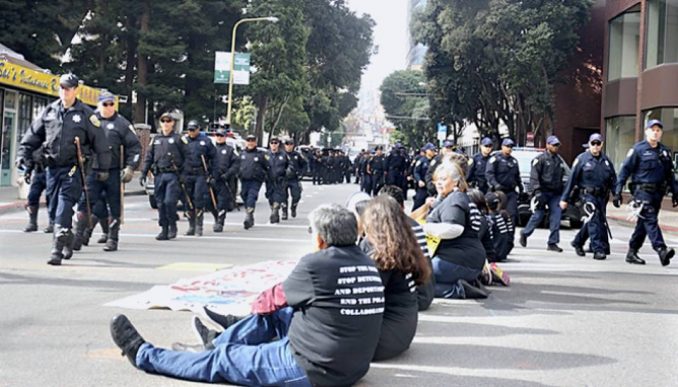 Demonstrators chained themselves together Jan. 26 and blocked traffic in front of the Immigration and Customs Enforcement (ICE) headquarters in San Francisco

This article was edited from a talk given at the March 18 special forum of Workers World Party in New York City in honor of International Working Women’s Month.

I have had a Google alert for immigration news for years. I have never been so heartbroken and overwhelmed from the news as I am now.

Somewhere in every neighborhood and barrio, a migrant is living in fear. Pregnant women are preparing to have their babies at home so they won’t go to the hospital. Parents are not sending their children to school. Children do not want to go to school.

Services that cater to immigrants are seeing a sharp decline. Migrants are missing doctor appointments. Lawyers are receiving more requests to have appointments by phone.

You can go to court on a traffic violation or to the Department of Homeland Security for your regular check-in and get detained by U.S. Immigration and Customs Enforcement.

You can speak at a press conference and get picked up by “la migra” (Latinx slang for ICE), which happened to a Dreamer recently.

The nation saw the video made by the 13-year-old daughter of Rómulo Avelica-González of ICE agents picking him up as he dropped her off at school in Los Angeles. All that time, she was sobbing.

As teachers console their students, they also have to ask, “Have you talked to your parents? Do you have power of attorney?”

Homeland Security Secretary John Kelly had to admit that Trump’s policies were creating such a fearful climate that more Muslims were seeking refuge in Canada than ever. Video shows migrants trekking to wooded areas to cross into Canada “illegally,” grabbing their passports from the hands of ICE agents as they victoriously jump into Canada.

This morning there was a notice that DHS is auditing a bakery with many Brandworkers, giving them eight days to come up with proof of status or be fired. [Brandworkers are members of an organization of retail and food workers “dedicated to protecting and advancing their rights.”]

Factory or home raids are a possibility, with criminal charges of “identity theft.”

No place is safe.

Millions are living right now in abject fear, with the anxiety of not knowing what will happen to them. I will not say they are cowering, because this is a brave and heroic community just by the nature of their getting to this country.

Things have horribly changed since Jan. 20. Not just for undocumented workers, but for all workers.

If ever there was a need for a global women’s fightback it is now! Cis and trans women must work to elevate our struggle and escalate the movement a hundredfold.

Racism and big business in war on migrants

The Trump cabal is working 24/7 to shape policy in their image, push it far to the right and undo all the gains that workers and the oppressed have made. Social security, health care and environmental legislation are all on the chopping block. We must fight to keep what we won — and demand more.

Under the Democratic administration of Barack Obama, over 2.5 million workers were deported, more than under any other U.S. president.

Trump’s policies, however, are on steroids. His unholy alliance with white supremacists, extreme racists and reactionaries has unleashed terror.

One goal is to drive migrant workers further underground, to live in the shadows, more and more susceptible to super-exploitation.

The Trump cabal has waved a red flag in front of ICE, an already angry bull, and incited them to go after migrant workers with a hatred of the oppressed and a desire to “make America great again” — in other words, make America white.

As racist police occupy and terrorize Black people and other communities of color, ICE agents are boldly and viciously carrying out roundups of undocumented and even documented workers.

The Latinx, Asian, Arab, Caribbean, African and Muslim communities are under siege!

The extra oppression of anti-Blackness also hits the immigrant community. The Black Alliance for Just Immigration states: “Black immigrants are much more likely than nationals from other regions to be deported due to a criminal conviction.” (stateofblackimmigrants.com)

Trump loves to paint a picture that they are going after hardened criminals, as if immigrants are the most violent of all. That is a boldface lie. ICE is treating the civil violation of being in the U.S. without papers as a felony criminal offense. It is a civil offense.

Being forced to use false Social Security numbers to work is treated like a criminal conviction. But the image is that migrants are going around raping and murdering. This is Trump’s Willie Horton.

This chilling terror over the migrant community is big business for the prison-­industrial complex.

Two companies that have rightfully earned the hatred of the anti-mass- incarceration movement, ­CoreCivic (formerly Corrections Corporation of America) and GEO Group, operate for-profit prisons and immigration detention centers in many states and for the federal government.

Between October 2015 and September 2016, over 350,000 undocumented people were detained — a number that will dramatically rise.

As the New York Times states: “The worse the news for immigrants, the better for the two companies. When a member of the Trump administration issues a memo or executive order, gives a speech or tweets about the crackdown on immigrants, shares of the two companies rise: Since the election, CoreCivic’s stock price has climbed 120 percent, and Geo’s has gained 80 percent.” (March 10)

This war on migrants is profitable. And it is worldwide.

‘Unity is most urgent’

The United Nations Refugee Agency reported in 2016 that the deaths of refugees and migrants crossing the Mediterranean Sea hit a record high. According to the U.N., almost 4,000 lives have been lost. But advocates believe that as many as 20,000 people have died at sea in the last two decades!

Many of the dead are from Eritrea, Libya, Tunisia and Somalia, and an increasing number are from Syria as a result of ongoing U.S. intervention there.

The only ones to blame for this mass tidal wave of migration are U.S. and British imperialism, which has created the conditions for people to leave their homelands. Until imperialist policies are overturned, workers will be forced to migrate.

In January 2016, Europol, the European Union’s criminal intelligence agency, reported that at least 10,000 unaccompanied child refugees had disappeared in Europe.

How do you lose 10,000 children? You don’t! This is orchestrated by human traffickers in complicity with law enforcement.

If they had been 10,000 white children — not Syrian or African or Middle Eastern kids — there would be a worldwide outcry demanding they be found. Now the only cry is from all those mothers and fathers who will never see their children again.

Trump’s entire presidential campaign was predicated on law and order. Building that “pinche” (f–cking) wall and banning Muslims are the cornerstones of his administration. Both are racist, hateful and anti-worker.

Trump’s number one goal is to divide the working class. Unity is most urgent to fight back against the growing assaults on all people.

The Trump administration’s wildly ramped-up war drive threatens people around the world — more than either Reagan or Bush. It is a diversion away from the struggle for working-class unity.

Trump’s budget proposal deeply slashes every federal agency or program that serves workers and the poor, from Meals on Wheels to winter heating aid to job training — all to pay for a whopping 10 percent increase in the Pentagon.

Meanwhile, Trump has already sent more ground troops to Syria. This week the U.S. carried out a murderous bombing of a mosque that killed dozens. And Trump’s secretary of state, oil baron Rex Tillerson, threatened war on the Democratic People’s Republic of Korea.

So what do we do in the face of this crisis? What do we do as imperialist plunders continue unabated and in stereo?

We have to do a lot. I will raise just two actions.

The Trump administration is waging war on the most vulnerable. But make no mistake: Its casualties are everyone who is not of the 1%! Everyone who is not rich, white and a member of the elite ruling class is being targeted.

Fight for the working class on May Day

In a war, you must call out the troops. And the next battle, to fight for the lives of the class we love so much, is May Day.

But I also want to bring your attention to the climate march set for Washington, D.C., on April 29.

Climate change creates forced migration. Let us not leave this demonstration in the hands of the liberals, who put a break on the struggle, who apologize for the capitalists or who settle, like they are settling for the Paris climate treaty. Let us take class politics to this event. We must settle no more!

Two days later is May Day. Let us remember that it was immigrants, primarily from Mexico and Latin America, who revived May Day in 2006. That was a great development for the workers and oppressed, because this is a day that is clearly our day and a demonstration that represents the interests of all who toil and not those who exploit.

It must be dominated politically by anti-capitalist forces and genuine revolutionaries.

Our weapons right now are leaflets and social media to get the word out about May Day 2017. We must organize to support the April 1 action in support of the Black Lives Matter movement in New York and go to hospitals, schools, workplaces and communities to get people out for May Day.

May Day is a work day for those who have jobs. And we are urging one and all not to shop, go to school or work.

We must send the message: Immigrants are not alone. We have their back. We say no to war abroad. We demand health care, housing and education. It is the workers and oppressed who created the wealth, and we want it back!

May Day 2017 must be a battle cry against the far right! The lives of all workers and oppressed depend on this!