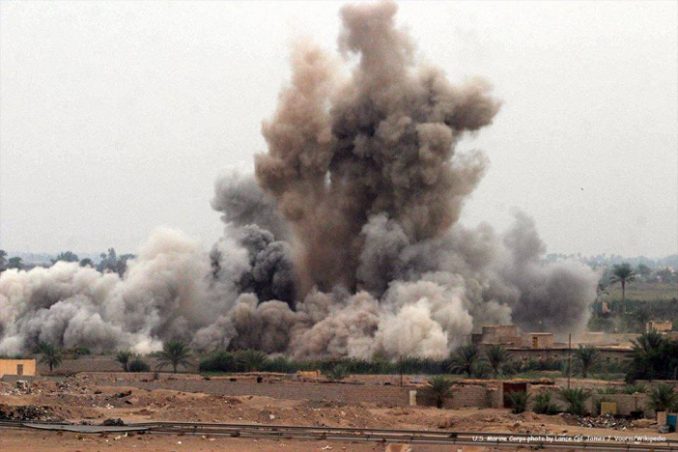 The Democrats in Congress and much of the capitalist media have made a big show of their opposition to President Trump’s reactionary domestic agenda. But they are noticeably quiet when it comes to his moves to shower even more money on the Pentagon while ramping up U.S. military intervention, especially in the already war-torn countries of the Middle East and North Africa.

Trump’s proposed budget, which would slash funding for almost all essential government programs, from environmental protection to the National Institutes for Health, would raise the money going to the military by another $54 billion annually, for a total of $639 billion. Trump also announced that he will nominate a Boeing executive, Patrick M. Shanahan, for deputy secretary of defense.

Leading “defense” stocks have already risen by 20 percent this year, anticipating the juicy contracts to be coming their way. It’s “Christmas-come-early,” wrote one investment firm. (profitconfidential.com) The chief financial analyst for moneymorning.com says that “war and terrorism” are “all growth industries.”

At the same time, the Trump administration is brushing aside much of the authority that the elected civilian government is supposed to exercise over the generals. It says the White House will dispense with “micro-managing” military operations. This translates to escalating U.S. war.

The results have already proven deadly, especially in Syria, which has been battling a combination of forces intent on “regime change.” The U.S. has promoted and armed what it calls the “rebels,” in an ill-concealed effort to pull down the independent Syrian government and replace it with a weak puppet state, as it did in Afghanistan, Iraq and Libya.

On March 17, Israel, which receives $3.1 billion from the U.S. each year, bombed a Syrian military site near Palmyra, despite having professed neutrality in the war against Syria.

On the same day, U.S. planes unleashed “a barrage of missiles and bombs” on a mosque in the Syrian village of Al Jinah in Aleppo Province. (New York Times, March 18) The Syrian Observatory for Human Rights said that 49 people were killed in the attack, which came right after evening prayers. The Pentagon claimed the victims were al-Qaida operatives, but local people hotly disputed that.

On March 19, just two days after the U.S. bombed the mosque, fighters described as “a mix of Islamist rebel groups and hard-line Qaida-linked jihadists” seized an industrial area on the outskirts of Damascus, the Syrian capital.  (NY Times, March 22)

On March 21, some 400 U.S. Marines and Army Rangers, backed by artillery and attack helicopters, began a major operation to take the city of Raqqa, which has been under the control of the Islamic State group (IS). “It was the first time that the United States had carried out an air assault in Syria in its campaign against the Islamic State, and the mission, which began Tuesday, reflected the leeway the Trump administration has given its commanders to carry out operations without prolonged review in Washington,” wrote the March 23 New York Times. “As the operation unfolded, Syrian state television and local residents asserted that at least 30 Syrian civilians were killed in an airstrike that hit a school where they had taken shelter.”

The U.S. is in Syria totally illegally, under the false pretense of fighting “terrorism,” even as it collaborates through a secret CIA program with groups it has admitted are terrorist. The Syrian government has not asked Washington for help in dealing with IS. On the contrary, it wants the U.S. out so it can restore peace and sovereignty to the country.

The U.S. and its allies, like Saudi Arabia and the NATO powers that participated in the invasion of Libya, have made the entire region a living hell. Millions have become refugees, and not a day goes by without more atrocities.

For example, on March 17, a Saudi military helicopter opened fire on a boat full of Somali refugees off the coast of Yemen, killing more than 30 migrants, including children. The Saudi military, using U.S. warplanes and electronic guidance, has been carrying out a devastating war since 2015 in Yemen, one of the poorest countries in the world.

The government of Iraq has charged that U.S. airstrikes on the city of Mosul killed as many as 200 people in mid-March. “If confirmed, the series of airstrikes would rank among the highest civilian death tolls in an American air mission since the United States went to war in Iraq in 2003,” wrote Tim Arango and Helene Cooper. (NY Times, March 25)

These monstrous war crimes have enraged many, many people, especially those who identify with the countries under attack and their religion. It is the warmakers in Washington, London and Paris who bear the responsibility for any desperate acts of retaliation that follow.

The best way to prevent future tragedies is to wage a vigorous, unrelenting campaign to end these horrible wars and make the profiteers pay reparations for their crimes.