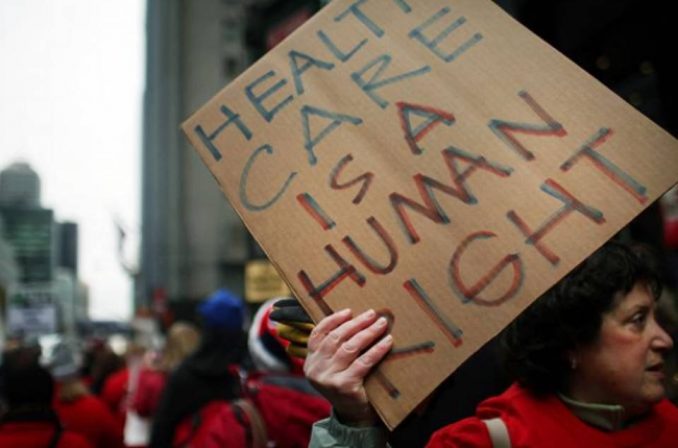 We did it. Resistance works.  People across the country fought back against a draconian health care bill and stopped its passage.  Through town hall meetings, creative street protests, social media, billboard ads, petitions, phone, email and letter writing campaigns, and more, people rebuffed the right wing’s attempt to undercut medical insurance for millions.

There was a countrywide rebellion against the “take from the poor and give to the rich” Trump/Ryan/Price “health care” bill.

A mood of fightback swept the country. In front of the White House, 24 people were arrested doing civil disobedience on March 23, representing the 24 million who would lose insurance under the administration’s bill.  Marches and rallies took place in Washington that day as part of a national day of action by grassroots organizations and several labor unions.

Bonanza for the rich, disaster for millions

The right wing has sought to overturn the Affordable Care Act since the day it was signed on March 23, 2010.  Politicians and right-wing media have slammed “Obamacare” every day since then. President Donald Trump declared war on the law and swore throughout his election campaign to “repeal and replace” it.

Due to the ACA, over 20 million people now have health insurance, many from Medicaid expansion in 31 states and Washington, D.C., and from  federal subsidies for low-income workers to purchase insurance.  Officials in 19 Republican-led states still refuse to expand Medicaid.  The ACA also mandated that private insurers cover essential health benefits. Every plan must include certain services, including maternity and newborn care, emergency services, substance abuse treatment and mammograms.

Enter House Speaker Paul Ryan in 2017.  He, Trump and Tom Price, secretary of Health and Human Services, hurried to get the terrible American Health Care Act passed, before its costs and effects were analyzed by the Congressional Budget Office.  But they weren’t fast enough.

The CBO said the law would offer billions of dollars in tax cuts to health insurers, pharmaceutical companies, investors and others, reaching nearly $1 trillion in 10 years. The bill would have eliminated taxes that pay for subsidies for low-income workers. (New York Times, March 15)

The Trump/Ryan/Price proposal was really an anti-health-care bill.  With it, the CBO said, 14 million people would lose insurance in the first year, and a total of 24 million would lose coverage by 2026.  Medicaid would lose $880 billion over 10 years.

The AHCA was a declaration of war on workers, low-income and oppressed people, women and seniors.

Seniors would have been penalized since the AHCA would allow insurance companies to charge them up to five times as much for premiums as younger people. AARP said a 64-year-old earning $15,000 a year might pay annual premiums of $8,400.  The bill would have weakened Medicare and shifted costs of Medicaid to the states, thus endangering every recipient. (NY Times, March 10)

This anti-woman bill would have defunded Planned Parenthood, which receives $500 million a year in federal funds to provide essential preventive, screening and contraceptive services to millions of women.

This bill was so unpopular that a March 23 Quinnipiac University poll said it had only a 17 percent approval rating, and that one in seven U.S. residents said it would cause them to lose coverage.

Speaker Ryan pulled the bill on March 24, just before the House of Representatives was to vote, as there were not sufficient votes for  passage. Trump had wanted the vote that day. Trying to win, the White House even promised the ultraright House “Freedom Caucus” (formerly the Tea Party) to scrap the ACA’s essential health benefits mandate, including coverage for maternity care and mammograms.  A room full of male officials was ready to sacrifice women’s health care!  Even then, the ultraconservatives were not appeased.

The Freedom Caucus opposed the bill because it didn’t go far enough to destroy every aspect of the ACA.  Many Republican House members and all Democrats wouldn’t vote for it because they saw the mass mobilizing and felt the pressure from protesters demanding, “Kill the bill!”  Some politicians anticipated long-lasting consequences if they voted for it; their constituents would never forget. Those whose states had expanded Medicaid were hard-pressed to vote for it.

The outcome is a victory for women, workers, seniors, low-income and Black, Brown and all oppressed communities.  People around the country said a resounding “No!” to defunding Planned Parenthood, to tax cuts for billionaires while 24 million would lose health insurance, and to rolling back hard-won gains.

The Affordable Care Act is still a capitalist program whereby millions of people are required to purchase health insurance on the market, although many low-income workers receive federal subsidies to do so.  However, 9.1 percent of the population still does not have insurance. (NY Times, Sept. 15) Some insurers charge premiums and deductibles that are too high for many consumers. Moreover, federal subsidies are jeopardized by a pending lawsuit brought by reactionaries.

The slogan “Medicare for all” is being raised again by the progressuve movement pushing for a single-payer health insurance program.  This would be much easier and actually less costly to administer and could potentially cover everyone in the U.S. The program would need some tweaks and additions, but it would be an improvement over the system of for-profit health care and pharmaceuticals. This is worth fighting for and is possible under capitalism.

The fight for health care shows that the capitalist system needs to be overhauled. Health care is a human right!  It should be provided for everyone, not based on ability to pay and maximizing profits. Socialist Cuba ensures that medical care, including medications, is accessible to all of its people. No one is denied for lack of funds.

The fight is not over, but people are emboldened by this win. Neil Gorsuch, a big business ally, is Trump’s nominee for Supreme Court justice.  HHS head Tom Price, who has jurisdiction over Medicare and Medicaid, has had a career of cutting both programs. He detests the ACA and vehemently opposes many insurance benefits, including access to free contraceptives for women through Medicaid and all private plans. Both Gorsuch and Price must be opposed.

This administration is out to roll back our rights. Tax reform and Trump’s pro-business, inhumane budget are on the horizon.  Everyone must remain vigilant and ready to protest any attacks on essential government programs. The ruling class’s every blow must be opposed by a united fightback.