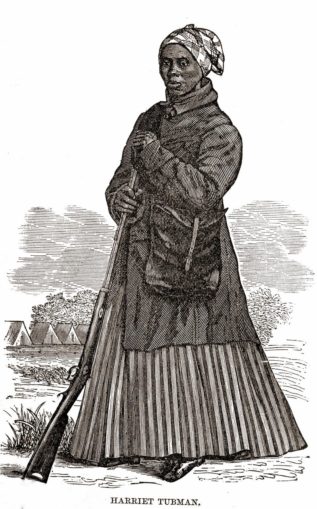 Harriet Tubman served as a spy and a scout for the First South Carolina Volunteers, a regiment of escaped slaves in the Civil War.

Transcribed from the March 22 taped message from Mumia Abu-Jamal “from inside Prison Nation,” recorded by Noel Hanrahan of prisonradio.org.

March, we are told, is Women’s History Month. We are here to celebrate the lives of several revolutionary women, but also to recognize a simple, undeniable truth: Without women, there would be no months to celebrate, for women gave birth to the world.

Harriet Tubman was one of the greatest freedom fighters in history, for she brought forth hundreds of souls from the prison house of slavery, bringing them north over the dreaded Mason-Dixon Line. And after the passage of the Fugitive Slave Act, bringing them to the far north of Canada.

I say that these three women — Mona, Pam and Monica — are like Harriet for they all fight for freedom almost every day, against great odds. And they keep on pushing — no matter what. 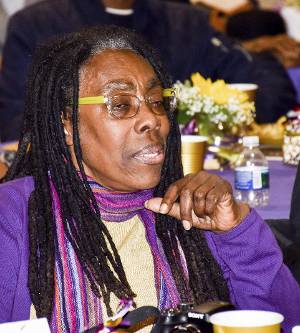 Ramona Africa was a young college student, trying to “learn the law” at Temple University. She was invited to come to City Hall, to actually see what went on in a MOVE trial. She was wholly unprepared for what she saw, for nothing she’d read in law books could explain the naked brutality of the law that she saw practiced in City Hall courtrooms.

She witnessed a railroading of MOVE men and women, and it turned her away from her chosen profession of lawyer. In short, what she saw MOVE members experience in pre-trial hearings and at trial repulsed her. Indeed, it radicalized her.

She entered court as a mild-mannered college student. What she saw and heard turned her into a committed revolutionary, Ramona Africa, MOVE member.

But that wasn’t all. As she came closer to MOVE, and the teachings of John Africa, and as she worked for the freedom of MOVE members, she didn’t know that the government was planning what they considered MOVE’s “final solution.”

On May 13, 1985, she found out. The world found out, when city, state and federal government agencies conspired to bomb MOVE from a helicopter.

When the fire had eaten its full, eleven men, women and children were either shot or burned to death. Their dogs were killed. An entire city block looked like Dresden, the eastern German city bombed in World War II.

Mona, burned badly on her arms, was one of two survivors of the firebombing in West Philadelphia. She was also the only person ever imprisoned for “riot.”

It’s fitting that she never believed in the law that she once studied.

She believed in revolution. She believes in it today. 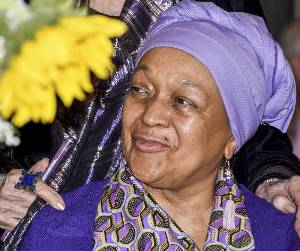 Pam Africa was a light-hearted party girl until she met MOVE. They were neighbors of hers. She wasn’t really into them — until she saw them attacked by police. She followed her heart and warmed to them. The closer she got, the more she found herself targeted and threatened.

She would not ignore what she saw. She couldn’t! She didn’t run away. She moved closer to MOVE and to John Africa.

Pam Africa — guided by her powerful heart and the power of her love for MOVE people — became a MOVE person. MOVE became her brothers and sisters, her family. They respected her fighting spirit so much that MOVE’s founder John Africa named her Minister of Confrontation.

She attended court hearings and was constantly faced with threats of violence by cops for her MOVE advocacy. In defense of others, she’s had her teeth knocked out, her leg broken. But she kept on scrapping.

She isn’t just a fighter. When she speaks, she sets crowds on fire. She is a master organizer. She gets them Ona Move!

For the young generation of activists, such as Black Lives Matter, she is known respectfully and affectionately as “Mama Pam.” She is a mother, grandmother and great-grandmother. And like Harriet Tubman, her mind, her soul, her fist are stuck on freedom. 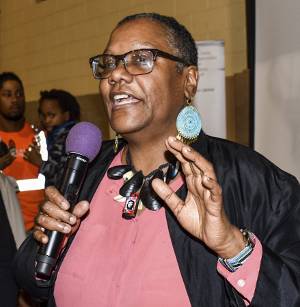 Monica Moorehead is a leading member of Workers World Party, a national Marxist collective. Karl Marx and Frederick Engels, authors of the “Communist Manifesto,” wrote, “The Communists everywhere support every revolutionary movement against the existing social and political order of things.”

It is a dictum that Monica, and her comrades, take to heart. They work with a wide range of people, trying to organize them into movements of resistance. From repression against labor unions to a new wave of women’s movements; from the scourge of mass incarceration, from the cancer of police repression against Black and Latino America, to the state terrorism encapsulated in the racist death penalty; from imperial wars in Iraq to the drug wars against innocents abroad, Monica and her comrades have been there, joining with and giving voice to movements that seek to build new worlds.

Monica comes from a long line of resistance to racism and repression. She was born in Jim-Crow-era Alabama, the granddaughter of school teachers and daughter of two college professors. As a high school student and member of the school band, she caused a ruckus by refusing to play “Dixie.” As a young woman, she was a supporter of the Prisoner Solidarity Committee and sold copies of the Black Panther newspaper. Her parents were part of the Montgomery Bus Boycott, led by Rev. Martin Luther King. Monica remembers her mother, a brilliant musician, being thrown out of a whites-only bathroom by cops.

From a youth of resistance to a life of resistance, that’s the story of Monica Moorehead. She is an editor of the revolutionary weekly, Workers World. She has co-authored and edited several books, including “Marxism, Reparations and the Black Freedom Struggle” and the reprint of “A Voice from Harper’s Ferry” by Black revolutionary Osborne Anderson, who accompanied John Brown on his raid on a federal armory to arm Black slaves. In 2000, she helped organize a historic Free Mumia rally at Madison Square Garden, and in 2016 she ran for U.S. president on the Workers World ticket.

Women build the world. They surely got a right to rock it!

The audio tape of Mumia’s talk can be accessed at tinyurl.com/lxvkdqw.