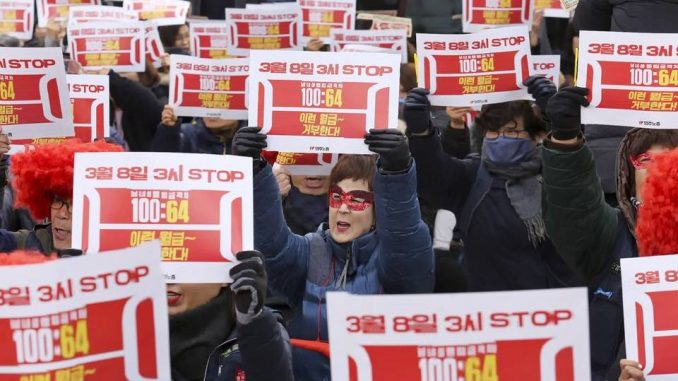 March 20 — Two issues today have been brought to the forefront by the capitalist establishment. Each one aims to push the people in the U.S. along dangerous political paths.

The first is whether the Trump campaign colluded with Russia during the U.S. election.

The second is the big lie that the U.S. is under threat from north Korea.

As this is being written, all eyes of the big business media are focused on congressional testimony by the heads of the two top spy agencies, FBI Director James Comey and Director of National Intelligence Mike Rogers. The two have now testified that Trump lied about being wiretapped by Obama and also affirmed that there is an ongoing investigation into whether there were connections between the Trump campaign and Russian interference in the U.S. presidential election. They are looking to see if criminal charges are warranted.

The common line of the Democratic Party leadership and much of the capitalist establishment is that the Russian government interfered with “our democracy” by influencing the election in favor of Trump. The united front between the FBI and the DNI during the congressional hearing might very well be the beginning of an attempt to severely undermine Trump. This would sharply accelerate the political crisis in U.S. capitalist society. Only time will tell.

Despite the unfolding gravity of the struggle against Trump within the ruling class, the basis for the workers and oppressed to oppose Trump should not rest on connections with Russia. That is a problem for the ruling class and its foreign policy.

The problem for the working class is that he is promoting Islamophobia as well as racism against Mexicans and immigrants, while fostering police terror, sexism, anti-Semitism and a belligerent and militaristic foreign policy, especially in the Middle East and Asia.

The campaign to prove that Russia interfered in the election, despite its potential major political consequences, is both a diversion and a political trap. Focusing on Russia takes attention away from the issues vital to the workers and the ­oppressed.

For months and months Trump spouted bombastic demagogy aimed at getting the working-class and small-business vote. He declared he was going to bring back jobs, preserve Medicaid, Medicare and Social Security, and guarantee “great health care,” among other promises.

On the jobs question, he has got his friends in big business — such as General Motors, General Electric, Ford and Intel, among others — to talk about investment plans, which had been long in the making, as if they were part of Trump’s “bring back jobs” campaign. But everyone should know that no corporation decides to make a billion-dollar investment after one meeting with Trump. Such investments are planned months and years ahead of time and are strictly based on profit projections.

The bosses are stroking him because he has promised them tax cuts and deregulation. But when they get back to the boardroom and meet with their investment bankers, their decisions will depend on cold calculation of the bottom line, Trump notwithstanding.

On the question of “great health care,” Trump has already exposed himself by getting behind a health care bill that is basically a transfer of wealth from the workers and the poor to the ultra-rich. The bill would give them tax cuts of $600 billion. At the same time it would cut $880 billion from Medicaid. It would leave at least 24 million people without health insurance by 2026 and raise insurance premiums for millions, especially for the elderly. (Congressional Budget Office report, March 13)

As for the broad masses, Trump’s budget says it all. He will hand over an additional $54 billion to the Pentagon and the military-industrial complex. At the same time, the budget will cut social services, environmental protection, science and art across the board.

Community programs such as aid to coal miners in Appalachia, community development programs in cities and towns across the country, help for the hungry such as Meals on Wheels, funds for opioid clinics, early education and child care, and a myriad of other projects will be either eliminated or cut to the bone. While many of Trump’s supporters are rich or well-off, there are poorer ones who believe his demagogy. Now they will be hurt badly by these cuts.

Liberals and the Democratic Party leadership, who are tied hand and foot to big capital, are hoping to bring down Trump and at the same time push people into the Democratic Party camp, even those who were opposed to Clinton. Russia is an easy target. The last thing these politicians want is a genuine mass struggle of resistance against Trump.

The anti-Russia howl from all quarters of the ruling class and the political establishment has to do with blocking any attempt by Trump and his ultra-rightist adviser Steve Bannon to shift foreign policy away from emphasizing conflict with Russia and direct it toward conflict in Asia and a “civilizational” conflict with Islam. This is the prevailing ideology in the clique around Trump.

The bourgeoisie may strongly suspect, and with much justification, that Trump could be hanging on to Russia out of business considerations. Even if Trump’s motives are based purely on greed, they dovetail with Bannon’s ideology.

In any event, the movement must not get swept into the trap of trying to oust Trump on an anti-Russia wave. The way to fight Trump is not to take sides with the Democratic Party’s top leadership, who for years have promoted war and neoliberalism.

Nor should anyone fall for the “interference in our democracy” argument. This is a democracy of the capitalist class, of the rich. When they talk about “our democracy,” they mean the “democratic right” of the various factions in the capitalist class to push the masses into electing one or another political grouping that will help the bosses exploit and plunder the workers and the oppressed, at home and abroad.

To avoid that trap, the workers have to have their own independent party that speaks in the name of all the oppressed and exploited and has a program of struggle to advance their class interests.

The other issue that the bosses are focusing on is the alleged threat to the U.S. from the Democratic People’s Republic of Korea.

Within days of his confirmation, U.S. Secretary of State Rex Tillerson threatened the DPRK by announcing in Seoul that “the era of strategic patience is over.” Tillerson said, “Nothing is off the table.” This was widely interpreted by the capitalist media to mean threatening military action.

Tillerson’s remarks, in conjunction with the Pentagon launching massive military maneuvers in Korea, amount to a dangerous threat by Washington against the DPRK.

Right now the Pentagon has embarked on two months of massive military maneuvers involving both the U.S. and the Seoul regime on land, in the sky and in the waters off the Korean peninsula.

Operation Foal Eagle involves 7,500 U.S. troops and 300,000 south Korean puppet troops in a simulated invasion of the DPRK. The central organizing force is the aircraft carrier USS Carl Vinson, decked with F-15 and F-16 fighter bombers. F-22s have also been flown into U.S. bases in south Korea. The Carl Vinson is accompanied by the guided-missile destroyer USS Wayne E. Meyer, among other warships. Armed drones have also been dispatched to the area by the Pentagon.

A London newspaper reported that the Navy SEAL unit which assassinated Osama bin Laden is participating in the massive U.S.-south Korean war maneuvers for the first time. It added that “Along with other elite U.S. units including the Army Rangers, Delta Force and the Green Berets, SEAL Team Six will take part in annual training exercises alongside south Korean forces, according to Yonhap News.

“‘A bigger number of and more diverse U.S. special operation forces will take part in this year’s Foal Eagle and Key Resolve exercises to practise missions to infiltrate into the North, remove the North’s war command and demolition of its key military facilities,’ a South Korean official told the news agency.

The message of regime change is loud and clear.

To add to the U.S. imperialist threat, the Pentagon has begun deployment of the Terminal High Altitude Area Defense anti-missile system to south Korea. THAAD is aimed not only at the DPRK but also at the People’s Republic of China. Despite its name, it is a highly aggressive system aimed at blocking retaliation after the power that has it launches an attack. The goal of THAAD is to give the U.S.-south Korean forces first strike capability.

The Pentagon rushed to get THAAD deployed because south Korea’s former president, Park Geun-hye, has been ousted for corruption and political reaction after a year of mass demonstrations. It was urgent to Washington that THAAD be installed before new elections, as Moon Jae-in, a liberal who favors reestablishing relations with the north, is expected to be elected the next president.

To listen to Washington, you would think that the DPRK had stationed soldiers and nuclear missiles pointing at the U.S. in bases in Mexico, Puerto Rico, Colombia, across Canada and on submarines in the waters off the Atlantic and Pacific.

But the opposite is true. The DPRK is a small socialist country of 25 million people. It is surrounded by the most powerful military forces on earth. The Pentagon has tens of thousands of troops, ships and planes surrounding the DPRK. There is a ring of U.S. bases strung from south Korea to Japan, Hawaii, Guam, the Mariana Islands and elsewhere.

The DPRK began its nuclear weapons program in earnest after President George W. Bush, in his January 2002 State of the Union address, designated Iran, Iraq and the Democratic Peoples Republic of Korea as the “Axis of Evil.” Shortly thereafter the Pentagon invaded Iraq with “shock and awe” and captured and killed President Saddam Hussein.

In 2003, Libyan leader Muammar Qaddafi surrendered his nuclear program for fear of a similar U.S. invasion. But in 2011 Washington, the French and the British invaded Libya and Qaddafi was captured and killed, just like Saddam Hussein.

The DPRK drew the only conclusion it could: the need for a deterrent that would stay the hand of imperialism.

In fact, the DPRK, contrary to Pentagon propaganda, is not trying to develop its missile system and its nuclear weapons in order to attack the U.S. It is trying to develop a credible deterrent to a U.S. or south Korean invasion.

Washington has threatened the DPRK with nuclear attack or attack on its nuclear installations numerous times. The DPRK agreed to suspend its nuclear program several times, during the Agreed Upon Framework in 1994 and during the six-party talks, which began in 1998. Both times the U.S. walked away from its commitments under the talks and instead imposed sanctions on the DPRK.

The bottom line is that the Pentagon had suffered its first military defeat during the Korean War of 1950-53, when it invaded the north twice and was driven back twice. The U.S. military wants to reverse that defeat and has been trying to do so for nearly 65 years.

Right now the DPRK is immersed in a valiant and desperate struggle to survive against overwhelming odds. It deserves the support of all progressive humanity and especially of the movement here, in the belly of the beast.