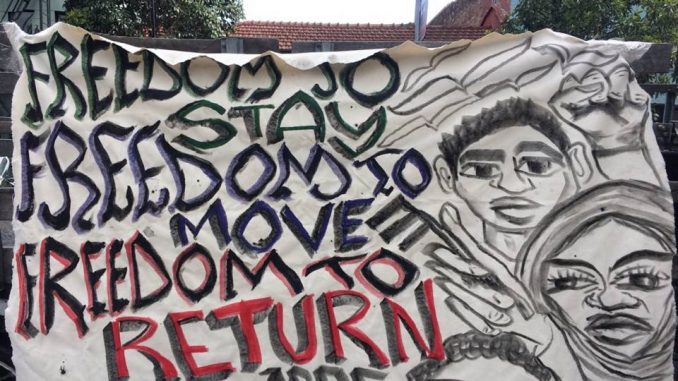 On March 16, the day Trump’s second Muslim travel ban was due to take effect, more than 500 people rallied at the Federal Building in San Francisco to denounce it. The action was called by the Arab Resource & Organizing Center, along with its partners in a coalition called Third World Resistance.

Organizers passed out an AROC statement “demanding and asserting our Freedom to Stay, Freedom to Move, and Freedom to Return for Arabs and Muslims targeted by this ban, but also for all oppressed communities threatened by the Trump administration.” This extremely clarifying statement linked, in a new way, the demands of immigrants with the struggles of workers and all the oppressed here and abroad. Here is the statement:

Migrant Rights. When we demand the Freedom to Stay for Arabs and Muslims, we stand in solidarity with all immigrants regardless of documentation or place of origin.

Indigenous Struggle. The Trump administration’s commitment to build pipelines and repress Native American movements such as Standing Rock is a continuation of the settler colonialism this country was founded on. We stand with Indigenous communities everywhere struggling for their Freedom to Stay on their land.

Fight Gentrification. In our very own Bay Area, we fight for our Freedom to Stay in our homes and communities, against the gentrification and displacement facing poor, working class and people of color everywhere.

No Ban, No Wall. We join with the millions demanding No Ban, No Wall because we believe that people should have the Freedom to Move without borders or racist xenophobic immigration policies.

Sanctuary Everywhere. From those fleeing wars in the Arab World, to those seeking escape from U.S. backed economic policies that have devastated Latin America, Asia and the African Continent, we fight for the Freedom to Move.

End Israeli Apartheid. Just as Trump’s executive order restricts Arabs and Muslims from coming across the U.S. border for ‘security’ reasons, Israel’s apartheid wall and network of military checkpoints restrict the daily movement of Palestinians. We fight for the Freedom to Move, both here, and for those facing occupation, apartheid and settler colonialism in Palestine.

End Imperialism. The six Muslim majority countries listed in this ban have all been targeted by the U.S. through bombing, military intervention and sanctions, resulting in forced migration and people becoming refugees. We stand against imperialism and for our people’s Freedom to Return to their lives and homes with dignity.

Refugees Right of Return. From Syria to Haiti to Palestine, we fight for Indigenous people and migrants everywhere to be able to travel, visit and return to their homelands. We fight for their right and Freedom to Return.