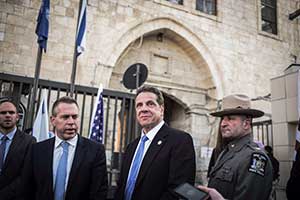 New York Gov. Andrew Cuomo made a 15-hour visit to Israel on March 5-6, pledging to forge stronger ties between Tel Aviv and his government.

Before ths trip, Cuomo tried to justify the flight as responding to a wave of anti-Semitism within the United States, but he reportedly told Israeli officials that he also hoped to bolster the flagging support for their occupying state within his Democratic Party.

After Cuomo’s return, Dani Dayan, Israel’s consul general in New York and a former West Bank settler leader who had accompanied the governor, told WNYC’s Brian Lehrer Show that Cuomo “said that the Democratic Party was traditionally the most pro-Israeli of the two [U.S.] American parties and he doesn’t understand why in the fringes of the Democratic Party there is a different attitude towards Israel.”

Dayan added, “You cannot unfortunately miss the fact that in the fringe left of the Democratic Party there are some elements that are blatantly anti-Israel, some even support BDS [Boycott, Divestment and Sanctions].” (mondoweiss.net)

The party establishment, which mobilized behind Hillary Clinton’s disastrous campaign last year and shows early signs of favoring Cuomo as a presidential contender in 2020, has typically competed with Republican leaders to express the most enthusiasm for Israel’s massacres, displacement and other crimes against Palestinians.

Before her defeat, Clinton promised the American Israel Public Affairs Committee “to take the U.S./Israel alliance to the next level.” (time.com)

But public opinion polls show that Democratic voters’ disgust with their party’s unwavering support for Israeli atrocities is rapidly entering its mainstream.

One poll released by the Brookings Institute in December found 60 percent favoring economic sanctions and other serious responses to Israel’s construction of settlements in the West Bank, a figure that had grown by 11 percent in a year.

The sentiment at his party’s grass-roots may have pushed then President Barack Obama to abstain from, rather than veto, a Dec. 23 U.N. Security Council resolution condemning Israel’s illegal colonization.

Fatigue with establishment Democrats’ bloodlust almost certainly ranked among the factors that led millions of their voters to avoid the polls on Nov. 8, propelling Republican nominee Donald Trump to a shocking victory.

Cuomo also used his trip to announce the launch of a 22-member New York-Israel Commission “to strengthen economic and cultural ties” with Israel.

The body, chaired by New York Daily News and U.S. News & World Report owner Mort Zuckerman, includes a raft of Zionist leaders and business figures, as well as two union presidents: Stuart Appelbaum of the Department Store Union and Randi Weingarten of the American Federation of Teachers. Among other tasks, the commission will “connect New York and Israeli law enforcement to share best practices for counterterrorism operations.” (governor.ny.gov)

With increased attention to racist killings and other police abuses, Cuomo and the Democratic establishment may find the importation of Israel’s methods of repression no more popular among their party’s voters than their lockstep support for its crimes.

Facing public outrage and two lawsuits, the NYPD dissolved the unit in 2014, but its “rakers” had already infiltrated mosques, student groups, bookstores and cafes, as well as political organizations like Al-Awda: The Palestine Right to Return Coalition.

Even after the unit’s dissolution, Mayor Bill de Blasio continued to defend its explicit targeting of ethnic and religious minorities against legal challenges.

“It really is a full-throated defense by the de Blasio administration of the same practices that his predecessor put in place,” Omar Farah, a Center for Constitutional Rights attorney, said before the two cases were finally settled last year. (theintercept.com)

Israeli occupation forces have also trained over 10,000 U.S. police officers and federal agents since 2002 on trips funded by Zionist groups like the American Jewish Committee, the Anti-Defamation League and the Jewish Institute for National Security Affairs.

Many come from departments, like those in St. Louis County, Mo., and Baltimore, whose killings of Black people have sparked mass uprisings, as well as from notoriously racist agencies like Immigration and Customs Enforcement.

The NYPD even has an office inside the Sharon District Police Headquarters in Kfar Saba, its expenses paid by the New York City Police Foundation.

Ultimately, only popular movements, not electoral politics, can end both domestic repression and U.S. support for atrocities committed overseas.

But the growth of these movements in the Trump era may make it harder for de Blasio, Cuomo and the rest of the Democratic establishment to find traction for their racist policies, even within the narrow confines of Democratic politics.