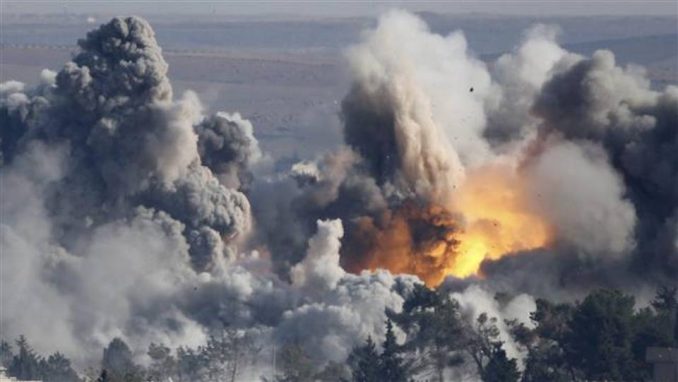 Smoke rises over the Syrian town of Kobani after a Pentagon airstrike there.

The Syrian “civil war” has entered its seventh year. While the Syrian Arab Army and its allies have successfully retaken the cities of Aleppo and Palmyra from the Islamic State (IS) group, the proxy groups that have backing from U.S., NATO and Gulf Cooperation Council forces continue their bloody offensive against the Syrian government.

“Rebel” groups continue to rebrand and regroup into various coalitions. All these groups aim to destroy Syria, which is why the U.S. and NATO powers as well as their allies Saudi Arabia, Turkey, Qatar and Israel have at times armed or financed them or given them other aid.

The Syrian Army, with the support of Hezbollah, Iran, Iraq and Russia, leads the charge against these forces.

The Kurdish-led Syrian Democratic Forces (SDF), including the Democratic Union Party (PYD) and their fighting arm, the People’s Protection Units (YPG), have carved out an autonomous region in northeast Syria. The YPG’s primary fight is against IS, especially in the city of Raqqa. They have coordinated at times with the Syrian Army in this effort, but they also have had a working relation with U.S. forces, which have contradictory interests opposed to the Syrian Army.

Meanwhile, U.S. war crimes in Syria have recently surfaced. The U.S. government has admitted to using depleted uranium (DU) weapons in Syria in November 2015, despite promising in March 2015 that they would not use DU in Iraq or Syria. As Foreign Policy magazine reported: “U.S. Central Command (CENTCOM) spokesman Maj. Josh Jacques told Airwars and Foreign Policy that 5,265 armor-piercing 30 mm rounds containing depleted uranium (DU) were shot from Air Force A-10 fixed-wing aircraft on Nov. 16 and Nov. 22, 2015, destroying about 350 vehicles in the country’s eastern desert.”

The U.S. used large amounts of DU weapons in Iraq in 1991, in Yugoslavia in 1999 and again in Iraq in 2003, mainly against tanks, as DU shells penetrate armor. Iraqi scientists found an increased incidence of cancer, birth defects and other health problems in regions where there had been heavy use of DU weapons.

As the Syrian Army continues its offensive against reactionary sectarian forces, some U.S.-backed, the U.S. deployed an estimated 400 Marines and Rangers to Manbij, Syria. (Reuters, March 9) A U.S. Air Force official stated that the purpose of the deployment is to aid the Kurdish-led SDF in the fight to retake Raqqa from IS.

The next day, 2,500 U.S. paratroopers were to be deployed to Kuwait to prepare for missions in Mosul, Iraq, in addition to Raqqa. (Army Times, March 9)

While the stated reason for this increased military presence is to fight IS, the U.S.’s track record of focusing its efforts against the Syrian government indicates that this is unlikely. In reality, the U.S. has already begun to build military bases in Kurdish-held northeast Syria. Washington’s temporary support for Syrian Kurds gives the U.S. an opportunity to gain a foothold in northern Syria.

However, this strategy may prove dangerous. Ethnic Kurds, who primarily inhabit Syria, Turkey, Iraq and Iran, are an oppressed nationality in Turkey. Turkey’s Erdogan regime, which has been a military ally of the U.S. and NATO, opposes any independent role for Kurds, in Syria as well as in Turkey, and has denounced the YPG as a terrorist organization. Thus, U.S. support for Kurdish forces in Syria may undermine its relationship with an Erdogan-led Turkey.

Given its need to reduce antagonism with the Turkish regime, it remains unclear the extent to which Washington will temporarily support the Kurdish SDF in order to gain a foothold in the north of Syria.

As history has proven time and time again, U.S. boots on the ground bring about nothing but death and destruction. Only the Syrian Army and their allies are capable of driving out the IS and other sectarian reactionary forces.

The Trump administration, rather than being “isolationist,” has pushed the war on Syria even further and has announced it will give the U.S. generals the authority to take military measures in Syria without needing affirmation from the president.

Ultimately, the only path to peace for countries like Syria is to drive out the imperialist powers and their proxy forces. It is the job for revolutionary socialists in the United States to oppose our own ruling class at home and demand, “Hands off Syria!”

For more information on DU, see the video by Sue Harris, “Poison DUst,” at tinyurl.com/zo2yfkv.