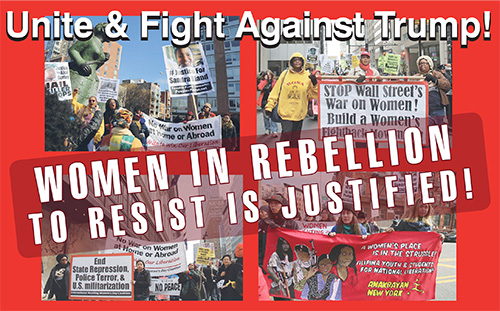 An International Women’s Strike has been called for March 8, International Women’s Day, by women in more than 50 countries. The call states that the day of action is specifically “organized by and for women who have been marginalized and silenced by decades of neoliberalism directed towards working women, women of color, Native women, disabled women, immigrant women, Muslim women, lesbian, queer and trans women.”

Organizers announce this March 8 as the beginning of “a new international feminist movement that organizes resistance not just against Trump and his misogynist policies, but also against the conditions that produced Trump, namely the decades-long economic inequality, racial and sexual violence, and imperial wars abroad.” (womenstrikeus.org)

March 8 has been identified as International Women’s Day since 1910. This emerging and exciting new radicalization has deep roots.

It’s March 7, 1970: A militant crowd of more than 1,000 women, male supporters and multigendered people are surrounding the Women’s House of Detention in Greenwich Village, chanting “Free our sisters! Free ourselves!” Women prisoners wave from the windows, shouting, “Power to the people!”

On this day in 1970, the Women’s Caucus of Youth Against War & Fascism reclaimed the celebration of International Women’s Day in New York City as a day of revolutionary struggle in the streets against women’s oppression. YAWF was the youth group of Workers World Party during the Vietnam War.

The day began with a spirited rally in Union Square, site of many historic socialist and labor rallies, which was chaired by Deirdre Griswold of the YAWF Women’s Caucus. Speakers included representatives from many women’s organizations: African American attorney Flo Kennedy, about her work to repeal New York’s anti-abortion laws; Sue Davis, of the YAWF Women’s Caucus on the revolutionary history of IWD; Dr. June Finer, of the Medical Committee on Human Rights on health care for women; and Kathy Ellis, of the New University Conference on the fight for daycare.

The Women’s Caucus of the Young Lords Party — the revolutionary Puerto Rican youth group — sent a delegation. Iris Benitez, lieutenant of information for the Young Lords, spoke about how Antonia Martinez had been killed the day before in a struggle against ROTC — the U.S. military’s Reserve Officers’ Training Corps — at the University of Puerto Rico. (WW, March 26, 1970)

After the rally, protesters marched to the Women’s House of Detention between 6th and Greenwich avenues. Before its relocation to Riker’s Island in the mid-1970s, the jail housed political prisoners — from Ethel Rosenberg to Angela Davis.

The year before the demonstration, two members of the embattled Panther 21 — Joan Bird and Afeni Shakur — were held there after their arrest on April 2. The Panther 21 were members of the Black Panther Party arrested in a U.S. government Cointelpro frame-up, who were acquitted of all charges in 1971.

But most of the women at the “House of D” were in jail for alleged crimes of survival, driven by poverty and desperation into prostitution or theft.

The arrest of three YAWF women at the protest led to the formation of the Women’s Bail Fund. To show solidarity with their sisters in prison, the group raised money to help women get out of jail and back on their feet financially.

Griswold, who since became editor of Workers World newspaper, says of that 1970 protest, “Marching from the rally to the House of Detention drew attention to the plight of poor and working-class women in particular and to women political prisoners. This revival of IWD was important because it took the day from being just a historical commemoration back to what it was originally — a struggle of the most oppressed women for their rights.”

IWD, traditionally held on March 8, began in 1908 as a day of action organized by socialist working women in the U.S.

A common misconception about IWD is that it began simply as a strike by women garment and textile workers in New York, either in 1857 or in 1908. However, research by feminist historian Temma Kaplan shows that this explanation is erroneous, and perhaps originated to separate IWD from its communist origins. Although there were strikes by women shirtwaist workers during those years, these were not related to the establishment of International Women’s Day. (Feminist Studies, Spring 1985, 163-171)

Instead, in 1907, German socialist Clara Zetkin organized an International Conference of Socialist Women where participants, including Russian Bolshevik Alexandra Kollontai, discussed ways to publicly support a struggle for women’s equality and liberation.

Socialist women in New York City acted on this discussion in 1908 by holding a mass meeting on women’s suffrage on March 8. Women workers also held a march.

The focus of these efforts was not to establish a day of speeches and floral bouquets, but rather to bring poor and working-class women and women of oppressed nationalities into the class struggle and support the liberation of these women, as well as that of their sons, husbands, brothers, fathers and comrades.

Kollontai described IWD as “a day of international solidarity in the fight for common objectives and a day for reviewing the organized strength of working women under the banner of socialism.” (“International Women’s Day,” Encyclopedia of Marxism, marxists.org)

The fiery power of working women in class struggle erupted on International Women’s Day in Russia in 1917 in an event that culminated in the first of two revolutions that year. In Petrograd, on Feb. 23 in the Gregorian calendar, now March 8, thousands of women needletrade workers walked out of their factories and marched through the streets, chanting their demand for “Peace, bread and land!”

As working-class men joined them, the crowd swelled to 90,000, and the spark of revolution lit that day led first to the overthrow of the czar and then to the class struggle that culminated eight months later in the communist revolution in Russia.

Reviving IWD as a day of struggle

But in the U.S. during the Cold War witch hunts of the McCarthy era, IWD demonstrations in the streets ended. By the 1950s, IWD celebrations were mainly small, indoor commemorative meetings.

Yet by the 1960s, a revolutionary wind was blowing new force into the struggle against women’s oppression. Many women of all nationalities were increasingly inspired by the power of a people’s fight — the Black civil rights and antiwar movements, La Raza and the American Indian Movement.

The women’s liberation movement emerged out of the confluence of these great mass movements. And many women began to study Marxism and communist history, inspired in part by  Mao Zedong’s statement that “women hold up half the sky,” as exemplified by Vietnamese women armed and fighting in a communist-led war for national liberation.

In 1968, socialist Laura X wrote an article calling for a renewal of IWD after watching Pudovkin’s 1929 Soviet film, “The End of St. Petersburg,” which highlighted the 1917 women workers’ demonstration on IWD. In 1969 she joined with members of Berkeley Women’s Liberation to organize an IWD street demonstration, which she believed to be the first in the U.S. since 1947.

The 1970 YAWF revival celebrating IWD as a militant day of struggle in the streets was followed by biweekly meetings of the Women’s Caucus. YAWF women combined theory with practice. They read and discussed Dorothy Ballan’s “Feminism and Marxism” based on Frederick Engels’ “The Origins of the Family, Private Property and the State.” And they studied works by Zetkin, Kollontai and V.I. Lenin, that chronicled the revolutionary communist approach to women’s oppression and struggle for liberation.

Today, the importance of that 1970 rally and the march to the Women’s House of Detention blazes out from the past. With that event the YAWF Women’s Caucus re-ignited the celebration of International Women’s Day in the streets of New York as part of the militant, communist tradition.

Remembering the fighting spirit of that day, Griswold explains how its lessons are crucial in today’s struggles: “Economic pressures today in the U.S. are forcing more and more women into the army or into prison.

“They need an alternative — a multinational, international movement against women’s oppression that is part of a worldwide struggle against imperialism and war.”

Naomi Cohen, Sue Davis, Kathy Durkin and Sharon Eolis also provided information for this article, an earlier version of which was published in Workers World on Feb. 23, 2005.