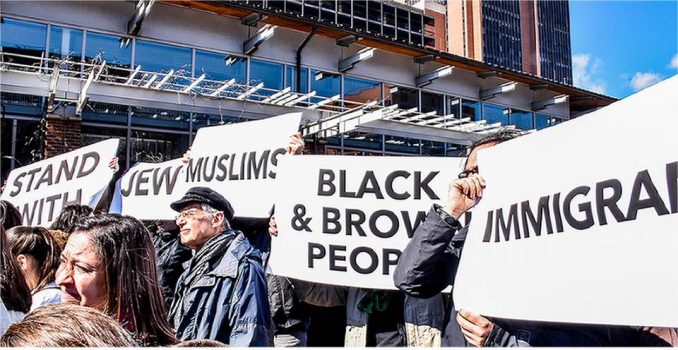 When news surfaced on Feb. 26 that hundreds of gravestones had been toppled and damaged at the Mount Carmel Jewish Cemetery in northeast Philadelphia and several Jewish centers had received bomb threats, area communities were quick to respond. On March 2, thousands turned out for a lunchtime “Stand Against Hate” rally outside the Liberty Bell at 6th and Market streets.

The desecration of headstones at Mount Carmel followed a pattern seen earlier in February in St. Louis, Mo., and at a Jewish cemetery in Rochester, N.Y., on March 2.  An increase in bomb threats against Jewish centers across the country has also been reported. These anti-Semitic attacks are taking place at the same time as a spike in fire bombings of mosques across the U.S.

These attacks are not casual acts of anti-Semitism or Islamophobia, but a clear reflection of the agenda of alt-right elements now serving as advisors in President Donald Trump’s White House. Trump’s lip service in condemning these terrorist acts during his congressional address on Feb. 28 fails to cover up his open embrace of Stephen Bannon, Reince Priebus and other openly white-supremacist, anti-Semitic Islamophobes and xenophobes.

Attacks on Trump’s Attorney General Jeff Sessions, the most recent target of anti-Russia attacks from hawks like Sen. John McCain, only serve to cover over Sessions’ legacy as a proponent of white supremacy in the U.S.

Unfortunately, the rally in Philadelphia was heavily dominated by Democratic Party politicians who have done little to expose Trump’s racism and links to the right wing, while themselves embracing policies that support attacks on immigrants and other people of color.

Several speakers thanked the police — openly ignoring an opportunity to stand in solidarity with Black, Brown and Asian communities under the gun from police brutality. Mayor Jim Kenney, who addressed the crowd, has been challenged by anti-police brutality activists for backing off his campaign promise to end stop-and-frisk in Philadelphia. Fortunately, a few signs in the crowd spoke to the need for solidarity with the Black Lives Matter movement.

Several speakers did condemn and link the attacks on Jewish cemeteries to Trump’s policies of excluding Muslim immigrants, his raids on undocumented immigrant families and the rash of fire bombings of Muslim mosques. Representatives of Christian, Buddhist, Muslim, Hindu and Bahai communities were among those who spoke.

Several speakers gave background stories about the people buried at Mount Carmel, including many who had survived the Nazi Holocaust in Europe that killed Jewish people, labor activists, communists, people with disabilities and many others.