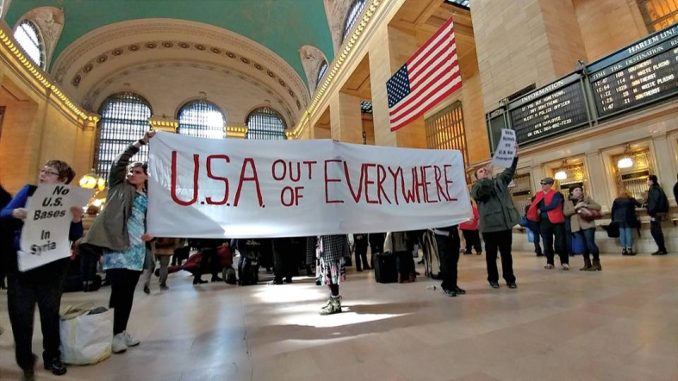 Dozens of musicians pretended not to know each other while carrying huge instruments across Manhattan. They sat on steps inside Grand Central Station, texting on their phones and keeping an eye out for notifications. About 50 musicians had been hired to perform the famous “Ode to Joy” from Beethoven’s 9th Symphony.

They were supposed to appear as a “flash mob,” an event that draws the attention of crowds by appearing spontaneously in a public space. Of course, the flash mob had been planned far in advance, but its success would depend on its secrecy.

However, when the musicians took their places and unpacked their instruments, about a dozen activists from different anti-racist, anti-imperialist organizations gathered nearby with a banner. It seemed part of the sudden event and no one moved to stop them. As Beethoven’s 9th rang out across the main hall of Grand Central Station, the multinational, multigender comrades held up the 30-foot banner with a simple yet powerful message: “USA Out of Everywhere.”

A firm called Big Hit Events had been contracted to pull off Beethoven’s 9th in Grand Central as part of a video propaganda campaign to promote the White Helmets. As reported in WW and other media, the White Helmets were started by British mercenary James Le Mercier. They have been sold to the public as a “humanitarian organization” when, in reality, they are a front for regime change and increased U.S. intervention in Syria.

The argument for a war on Syria is weak, as people in the United States are sick of war. Millennials have not lived in a world without the U.S. wreaking havoc and destruction. They also favor socialism over capitalism, according to a survey published on Salon.com last July.

Any public relations agency, such as The Syria Campaign (based in London) and its parent company Purpose (based in New York), would be hard-pressed to sell war to such a population. That’s why their strategy has been a high-gloss propaganda campaign to confuse and demoralize anti-war sentiment.

This campaign includes the Oscar-winning White Helmets documentary on Netflix and ready-for-YouTube spectacles like the Grand Central flash mob. Nobody expects this will produce a giant march to demand war. But, by portraying the Syrian government as evil, it is meant to discourage the anti-war movement from mobilizing to stop U.S. intervention. What the ruling class wants is for everyone to stay home.

As the banner wound its way around the musicians, three activists made their way into the impromptu orchestra pit, holding up signs that read “Hands off Syria!” “This is U.S. war propaganda” and “No U.S. bases in Syria.”

The activists were silent and did not interfere with the concert, allowing the music to serve as a powerful backdrop to the action itself. The PR agency that had spent tens of thousands of dollars to argue for war was now providing a platform for an anti-war agenda instead.

“This was a really creative action,” said one organizer. “We made a big impact with just a handful of people, and nobody got picked up” — meaning kidnapped by the police.

While the flash mob was contracted by a PR agency, the actual client remains unknown. However, after the action, an army of journalists, artists, writers and so-called activists all connected to a shady PR firm, The Syria Campaign, took to social media to loudly condemn it. Anna Nolan, director of The Syria Campaign, accused the activists of being paid by the Russian government.

In the end, though, praise far outweighed the negative feedback: Tweets from the action were shared more than 2,000 times, and video taken of the peaceful disruption received more than 70,000 views.

The musicians, who worked wonderfully under pressure, expressed frustration that they hadn’t been informed of the purpose — or the true patron — of the performance. Activists were careful not to touch or disturb the musicians’ musical instruments at any time.

With Trump in the White House, only a suicidal left would support more imperialist war. Anything that enables the capitalists to pass more guns off from the military to the police must be vigorously opposed. Anything that encourages more working-class and oppressed people in the U.S. to kill and oppress their sisters, brothers and siblings overseas, with a good chance that they’ll end up dead or hurt themselves, is completely reprehensible.

As the warm reaction to this most recent anti-war action showed, the working class and oppressed are waking up to the fact that the U.S. establishment has nothing to offer them under a capitalist system.