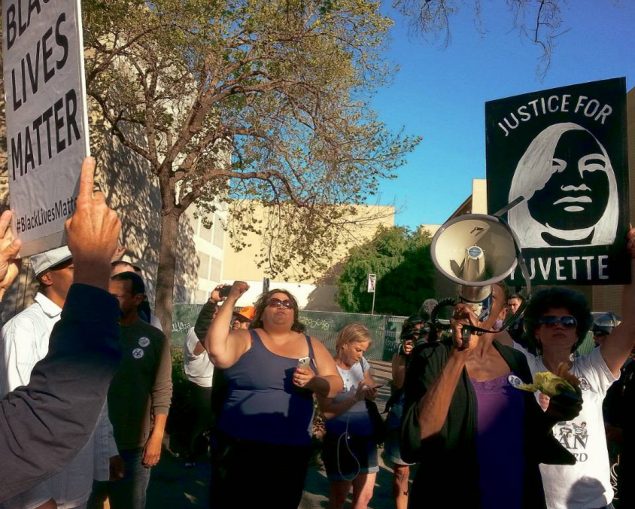 Oakland, Calif. – Supporters of Yuvette Henderson’s family gathered at the U.S. Courthouse here on Feb. 23 and packed the courtroom. The city of Emeryville was presenting a motion to dismiss the family’s wrongful death federal lawsuit. Civil rights attorney Dan Siegel had filed the suit on behalf of her family on Oct. 29, 2015.

The U.S. Courthouse security seemed to be intentionally taking as much as five minutes to process each individual as Henderson’s supporters lined up to witness the proceeding. This led to some people missing as much as 45 minutes of the testimony as they waited to get in. Henderson’s sister was denied entry, solely because she wasn’t carrying ID.

A 38-year-old mother of two children, Henderson was shot and killed by the Emeryville Police Department on Feb. 3, 2015. She had been identified by a Home Depot security guard for alleged shoplifting. After she left Home Depot that day, she tried to flag down a passing bus. Henderson was then cornered by the EPD at the Extra Space Storage Facility garage in Oakland, a few blocks from the Home Depot.

According to a press release issued by the Anti Police-Terror Project: “Witnesses and police have presented conflicting accounts of the circumstances of the shooting. However, what is clear is that the amount of force used against Yuvette was grossly excessive and unjustified. Michelle Shepherd and Warren Williams shot at Yuvette seven times at close range. Officer Williams killed her with a shot to the head from an AR-15 assault rifle — a military-grade weapon, the same weapon used by the United States military in wars throughout the world.”

Magistrate Judge Donna Ryu questioned the plaintiff’s lawyer, Dan Siegel, and the defense attorneys representing the city of Emeryville on the defense’s motion for a summary judgement (essentially to dismiss the suit).

Siegel stressed, along with many other arguments, that “the facts were incontestable” with respect to the third volley, which was the fatal shot to Henderson’s head. He said Henderson was on the ground on her right side, shot in her right arm and didn’t have the gun. Her back was to the gun, which was three to six feet away. Williams then shot her in the head.

The defense claimed there was no evidence that Williams understood the extent of her injury, but conceded that he knew she was unarmed before he shot the fatal third volley. The defense argued that, as a police officer, Williams had qualified immunity.

Siegel cited four different cases where qualified immunity did not apply when the victim was injured and not armed.

Judge Ryu stated she would try to issue her decision before a planned settlement conference on March 28.